Underrated The Bride Worth A Look

It’s amazing the hidden gems you find when searching the bargain DVDs at the off name shops. Such was the case when I discovered the 1985 Frankenstein update The Bride. I’ve always liked this movie, and upon a new viewing, I’m further miffed why the stylized locales and fine story are passed over by audiences. 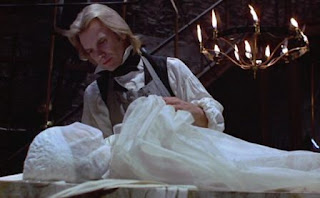 Baron Charles Frankenstein (Sting) creates a beautiful mate (Jennifer Beals) for his first monster creation (Clancy Brown). After her disgusted reaction to the creature, Frankenstein keeps the bride, coins his perfect woman Eva, and introduces her to high society. Thought dead in his destruction of Frankenstein’s laboratory, the Baron’s monster wanders the countryside until he meets Rinaldo (David Rappaport), a dwarf. Rinaldo names his new friend Viktor and together they join the circus in . Neither Eva nor Viktor adjust to society well, and their telepathic connection makes them question the nature of their creation.
I’m not that a big Police fan, but I actually have a handful of Sting’s films. It’s strange that he is billed last in The Bride’s credits. Maybe he’s not considered a great actor, but he is without a doubt a star. Perhaps director Franc Roddam (Master Chef) didn’t want The Bride to be The Sting Show, since at the time, Jennifer Beals (The L Word) was an equal star- Flashdance, anyone? Both are adequate enough here. Sting broods and does anger well, and he was young and blonde and pretty for the part of mad scientist Frankenstein. Beals has the big eyes and beauty without make up to pull off Eva, but her hair is still eighties, and screenwriter Lloyd Fonvielle gives her some awkward early dialogue. Understandable when she first comes to life that things would be clunky, and actually when Eva finds her voice near the end of the film, Beals sells the turnaround well. 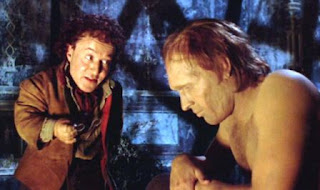 Despite the bigger names in The Bride, the finer work is with Clancy Brown’s monster Viktor and his little pal Rinaldo. The Highlander alum is delightful as the cast aside creation experiencing the real world. We’ve seen the bride aspect in Frankenstein tellings before, namely the iconic Bride of Frankenstein, but Viktor and Rinaldo’s storyline is a little more original. The late Rappaport (The Wizard) is also charming as the equally disrespected dwarf. At first he uses Viktor’s size and scares to his advantage, but their friendship becomes very genuine. Sure we may want to look at the very pretty Jennifer Beals and Sting, but the heart of The Bride is this darling plotline harkening back to Mary Shelley’s source novel. 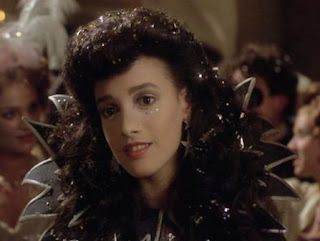 Jennifer Beals’ hair and make up have a touch of that eighties height, but The Bride achieves more with its lovely castle locations and French countryside. We don’t get a definite time or place reference in The Bride beyond Viktor’s traveling to and Eva’s reference to Prometheus Unbound (1820) by Percy Shelley, but the ladies’ costumes have a sleek Regency feel, and Frankenstein’s castle is both opulent and creepy. There isn’t anything scary in The Bride, but its look is decidedly gothic. Alluring, yet ominous. There’s romantic flare and dashing soldiers and pretty white horses and all that, but the core of The Bride is this gothic imagery and the horrors that humanity creates. There are lessons to be learned by Frankenstein’s individual horrors in the name of science and the persecutions of society that Viktor and Rinaldo encounter. The opening scenes of The Bride are a flashy eighties attempt to explain the creation science, and Clancy Brown’s make up as the deformed Viktor leaves something to be desired. However, the touches from Shelley’s novel keep the human element of the story at The Bride’s forefront.

My budget DVD has an informative director’s commentary and the obligatory trailers, but is otherwise devoid of features. Did Beals and Sting get along? Did Brown have trouble with his makeup as he did in Highlander? Did Rappaport sign on because as a little person, he understands the story of the monsters isolation? These insights remain unknown. Likewise I was surprised by the underutilized score from Maurice Starr (Ghost). It’s haunting and uplifting and tragic in all the right places, but we only hear the title theme at the beginning and end of the movie. These quibbles, however, don’t deter one’s viewing of The Bride. Parents might dislike the full frontal female nudity and innuendo between Frankenstein and Eva, but like most films from twenty years ago, what was once racy is tame compared to today. 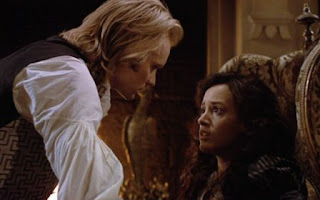 Fans of gothic archetypes and Frankenstein tales will no doubt enjoy The Bride. Gore fans might find The Bride slow and romancey, but there’s enough intelligence for fans of Shelley’s wonderful novel. Look for this affordable DVD at your favorite retailer.
Posted by Kristin Battestella at 12:03 AM