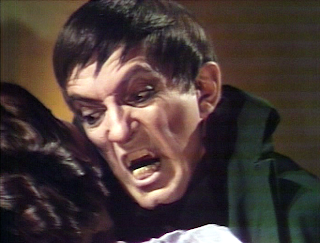 Dark Shadows: The Vampire Curse A Fast and Easy Delight
By Kristin Battestella
My husband has given me a few Dark Shadows sets as gifts.  However, it was my mother, a Barnabas Collins fan herself, who gave me Dark Shadows: The Vampire Curse last Christmas.  This exclusively Barnabas DVD is the perfect length for vampy fans looking for that sixties kitschy fix this October.
After an ill-fated fling with Barnabas Collins (Jonathan Frid) in , jealous and vengeful maid Angelique Bouchard (Lara Parker) plots to ruin the wedding of Barnabas and Josette Du Pres (Kathryn Leigh Scott).  Angelique, a witch and voodoo practitioner, makes Josette and Barnabas’ uncle Jeremiah (Anthony George) fall in love with each other and the spellbound couple eventually elopes. Patriarch Joshua Collins (Louis Edmunds) is powerless to stop his brother and son as they duel for Josette’s affection as Angelique blackmails Barnabas into matrimony via his little sister Sarah’s (Sharon Smyth) welfare and sets up time traveling governess Victoria Winters (Alexandra Moltke) for a witch trial.  Scorned once more by Barnabas’ continued love for Josette, the undaunted Angelique finally curses him to an eternal vampire torment. 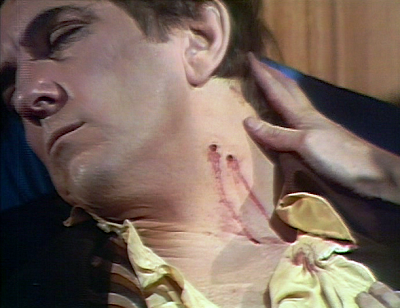 Rather than jumping around in time with séances and flashbacks from the soap opera’s original 1960s establishment, The Vampire Curse opens with Dark Shadows’ 1795 storyline- which originally aired as a flashback departure in 1967 and 68.  This three-hour compilation focuses on the events leading up to how Barnabas Collins became a vampire, and it’s a fine introduction for the newly crowned vampire fan.  Some die-hard fans may not like this linear style or quick catch up approach- it is after all unusual for this series, which famously uses time travel and lengthy, historical sequences to rotate the cast and change storylines. However, instead of wading through hours and episodes worrying about all the other storylines- witchcraft, Frankenstein motifs, and that dreaded dream curse for example- The Vampire Curse offers everything you need to get your Barnabas fix. 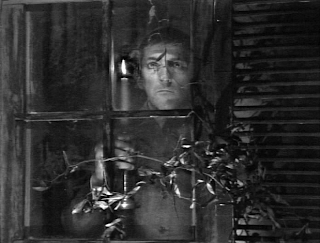 Perhaps there are modern actors who can pull of the complex vampire motif ala the tormented Barnabas Collins, but Jonathan Frid (also Barnabas in the feature House of Dark Shadows) will always be one of the essentials, right up there with Bela Lugosi and Christopher Lee.  The Canadian actor-trained at both RADA and Yale- captures the upper class, Shakespearean, Old World vibes of a colonial aristocrat and blends the society charm wonderfully with reckless love and utter heartache.  Frid’s vamped out portrayal is over the top in the style of the time, yet his bloodlust restraint is subtle, latent, repressed.  The secrets, deception, and vampy hunger are kinky, twisted, and dynamite to watch. Goodness yes, Frid is one of the most notorious cast members when it comes to flubbing up his lines or needing a not so subtle glance at the cue cards.  However, his recovering stutters, cover up shifting, and sharp smile in a way help the Barnabas portrayal.  This vampire is always ready to burst for love or blood, isn’t he? Despite his slick frock, fancy cape, or smooth suit, Barnabas is always ready to pursue his love incarnate or grab a working girl on the Collingsport docks.
It’s called Dark Shadows: The Vampire Curse, but this story is just as much about the women in Barnabas’ life: the witchy, possessive Angelique and the innocent French lady Josette.  Jonathan Frid wouldn’t have had much to go on without the young and alluring Lara Parker (Save the Tiger, Race with the Devil).  Her meddling presence sets the entire twisted tale in motion.  The audience can’t deny she is damn sexy, but her affection comes at very deadly price.  Likewise, Katherine Leigh Scott’s () Josette mirrors Angelique with innocent beauty.  Both are stunning and exotic; but Scott is the naïve, upscale antithesis to Parker’s jealous servant.  The love triangle is essential here and causes ripples for the entire series.  We want to see Barnabas with his beloved Josette-what’s not to love about her? However, we absolutely love and love to hate Angelique.  You don’t need glittery effects and outlandish tangents when you have meaty talent and emotional story like this. 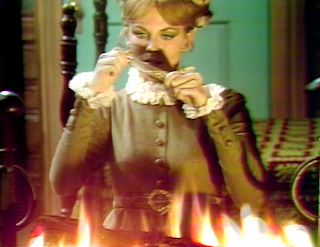 I dare say this set is even kinkier on the romance and innuendo than I remembered last. It’s been several years since I’ve seen this segment of the show, and Barnabas just crosses into too many affairs with the wrong women!  This colonial vampire storyline is actually both my parents’ favorite part of Dark Shadows, and the origins of the tormented Barnabas Collins catapulted the soap and the vampire himself into cult fame.  All that old glory is captured here- from the wonderful score by Robert Cobert (War and Remembrance) and the moody direction from Lela Swift (Ryan’s Hope) under show runner Dan Curtis (War and Remembrance, The Winds of War) to the tragic storyline and fine performances.   Though Dark Shadows regulars Thayer David as Ben Stokes and Grayson Hall as the Countess Natalie Du Pres are in great form, in this streamlined set, we don’t see them or the lovely Joan Bennett (We’re No Angels, Little Women) as much as I might have liked.  Alexandra Moltke and Louis Edmunds also have reduced time here, and the disjointed appearance by some of the cast hints that something (like the rest of the show!) is missing.  Several staple cast members including David Henesy and Nancy Barrett are absent entirely.  Anthony George and Sharon Smyth are also fairly wooden and leave a little something to be desired.  Nevertheless, it’s nice to see a stage like acting company have the freedom to hone the story at hand with only basic, even rudimentary effects. 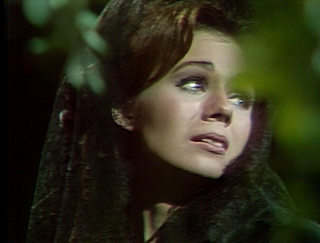 Yes, a surviving soap opera from 1967 isn’t without its faults.  There are significant camera imperfections against our trained HD eyes, bemusing appearances by microphones and sound booms, set mistakes, visible crewmen, and fumbled dialogue all here to the Dark Shadows fans’ delight.  Of course, we’ve seen better-stylized and modern interpretations of 18th century , but the colonial look here gets the mood across just fine.  There’s something so wonderfully simplistic about capes, ruffled gowns, and lots of smoke to set the atmosphere for the stage like gothic drama.  Some of the sound transfer is iffy but again understandable due to the technology of the time.  Again, the editing of The Vampire Curse also leaves something to be desired in a few spots. The DVD team is editing numerous episodes together and trying to pack what took months of television into a very short timeframe.  Some of the pace drags on, and occasionally it’s even tough to discern why the segment one is watching is significant until more puzzle pieces are presented.  We see Victoria Winters twice for goodness sake, and her time traveling to the past is how we got there in the first place! There are a few wonderful things missing when you have to cut out concurrent storylines, but the point of The Vampire Curse is to make folks check out the rest of the Dark Shadows DVDs, isn’t it? Thankfully, the crew got most of the presentation correct, and the juicy gist of Barnabas Collins is here quick and tasty. 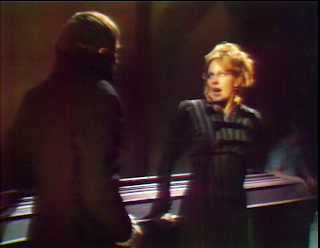 Dark Shadows: The Vampire Curse packs a lot into its 3 hour long episode, and there’s no chapter break choices or scene selection options.  The first half sets up the background, and a middle point before the last vampy hour would have been a nice place to break for two super sized episodes.  I’ll take an hour and half mini movie compared to the 22-minute episodes (or the 18-minute chopped up edition that used to run on the Sci Fi Channel). Only the concluding moments return the audience to the contemporary 1967 resurrection.  It’s a little ironic that we spend most of The Vampire Curse with a color origin story and then end in black and white when the Barnabas character was actually introduced on the show.  The black and white Episode 221 is included as a special feature as well.  It’s a nice treat for those who haven’t seen what an actual episode looks like, but I’m not really sure why this particular episode was chosen before others that continue The Vampire Curse’s tale. The short interview with star Jonathan Frid is also fun.  The usual promos for other Dark Shadows books and DVDs are here as well, but alas, we have no subtitles.  Understandable, obviously, but it might have been fun to see those dialogue mistakes in print onscreen! 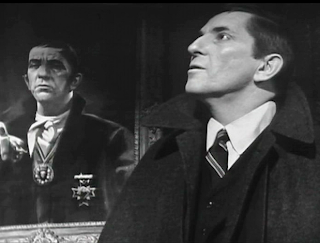 Dark Shadows: The Vampire Curse can be loved by fans of the original series and newcomers alike.  Traditional fans may simply prefer the DVD sets; but for those who don’t have the time or money to invest in a 1,200 plus episode show, The Vampire Curse fits the bill for an October itch or viewing anytime of year.  Younger audiences or those who might laugh at the stock production of the time should give this set a chance as well.  This is as quick and cleaned up as Dark Shadows gets, and those Twilight folks can get educated on what a real vampire is meant to be like.  If Johnny Depp and Tim Burton ever get their feature film adaptation going (and I hope they get it right, not weird!), modern audiences will probably eat up this classic material.  Get a head start on the original gothic soap with Dark Shadows: The Vampire Curse

.
Posted by Kristin Battestella at 2:17 AM 3 comments:

I Just Love Teen Witch!
By Kristin Battestella
I can’t help myself- I think I have the 1989 family friendly spookfest Teen Witch memorized.  Though seriously dated and trapped in the eighties time warp, there’s still plenty of enchanting fun here for young and old.
Soon to be sixteen, frumpy teen Louise Miller (Robyn Lively) doesn’t fit in with the popular crowd at school.  Her parents (Caren Kaye and Dick Sargent) are clueless, little brother Richie (Joshua Miller) is an annoying slob, and her big crush Brad (Dan Gauthier) doesn’t know she exists.  After a bicycle accident, however, Louise encounters Madame Serena (Zelda Rubenstein) and learns her true calling as a reincarnated witch.  With Serena’s help, Louise realizes her newfound powers and casts spells to be the most beautiful and popular girl in school-but will there be consequences to these magical ways?

ASAP.
Posted by Kristin Battestella at 12:04 AM No comments: