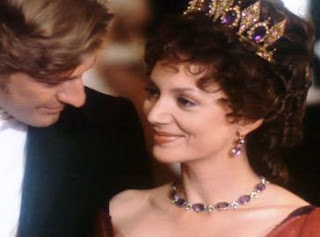 Scarlett No Gone With The Wind

I wanted to like Alexandra Ripley’s 1991 Novel Scarlett, but the book holds little against Margaret Mitchell’s original or the classic film adaptation. Likewise the 1994 miniseries Scarlett boasts lavish locales, costumes, and all the soap opera scandals one could ask for. These visuals and shockers are fine and dandy, but in the end William Handley’s adaptation holds little weight onscreen or off.

Now that Melanie Wilkes is buried, Scarlett O’Hara Butler (Joanne Whalley-Kilmer) pursues her wayward husband Rhett (Timothy Dalton) to . Despite a brief, yet passionate reconciliation, Rhett rejects Scarlett and marries Anne Hampton (Annabeth Gish, The X-Files). Although she is pregnant with his child, Scarlett does not tell Rhett, instead traveling to to find her O’Hara relatives. Cousin Father Colum O’Hara (Colm Meaney, Star Trek: Deep Space Nine) is returning to , and Scarlett leaves for her ancestral homeland. 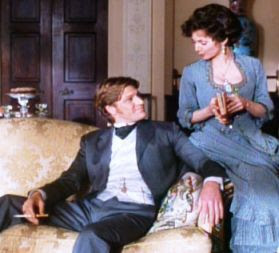 While the supporting cast does well with what they are given, no one is given that much, except Scarlett herself. Joanne Whalley Kilmer made a name for herself somehow in the early nineties, but I’ve never seen her in a part that stole the show for me. Navy Seals? ? Outside of being the former Mrs. Val Kilmer, what has she done? A better actress could make do with such a convoluted script, but nothing about Kilmer’s (or rather Whalley’s now) performance harkens to the powerful Scarlett we’ve previously viewed or read. Vivian Leigh was by no means perfect, but she commanded attention when entering a room. Little Joanne is actually quite short in comparison to her leading men.

Timothy Dalton is actually my favorite Bond (The Living Daylights, License to Kill, and the quirky Beautician and the Beast!) but he has precious little to do here. Everyone in Scarlett is made to look stupid. All Rhett does is bat his eyes at Scarlett, then whisk away again. Over and over they taunt each other. I would have liked to have seen more. He seems capable of giving Rhett weight, but his shining moment in Scarlett never comes. Likewise Sean Bean’s (Sharpe) barely there English Lord Fenton is reduced to his usually villainy. At least his and ’s accents are authentic. It’s a joy just to hear them talk so we break from Miss Whalley’s horrendous southern delivery.

Two bright spots in Scarlett that earn their keep (Sean Bean’s rapacious self is always a keeper) are Colm Meaney as Scarlett’s cousin Colum and Melissa Leo (Homicide: Life on the Street) as her sister Suellen. Both are few and far between in the series, but their accurate portrayals and authentic looks lend real honesty to their scenes. Sure we love the over the top bits, but it’s nice to remember most of the people during this time were not like Scarlett, Rhett, or Lord Fenton. Many were poor, working class, humble folks. 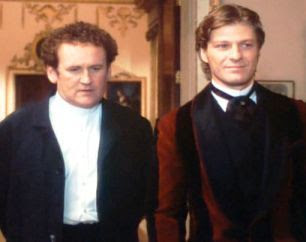 Accents and dialogue may suffer, but Scarlett is the best looking miniseries since North and South. Scarlett’s clothes reflect each of her situations perfectly. Despite her somewhat humble dress in , Scarlett is never seen in the same outfit twice. We don’t spend much time in any one locale, either. , Tara, , , , all look stunning. I’m in heaven making my ‘beautiful scenery’ screen captures. The post Civil War opulence is certainly a delight to look at, even if it is a bit overwhelming. How many different places does Scarlett own? Buying the fabrics to make her gowns today wouldn’t be cheap, either.

Pretty and shiny things onscreen, however, are not enough to explain the mishmashed story presented by Hanley. The end of the novel is completely forgotten in favor of a new, murderous idiocy, and the only worthy subplot regarding the Fenian Brotherhood vanishes partway through. 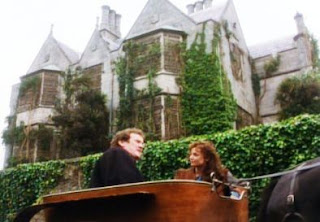 The DVD presentation hinders the viewing of Scarlett as well. The six hour mini series is split over two discs, with no breaks. It’s one straight mother load without even additional credits introducing the players in the second half. So if one did want to pause and return, it’s a matter of skipping chapters instead of having definite episode beginnings. Upon my first viewing, I thought there would be an end at which to stop. Instead I was fighting to stay awake, wondering when Scarlett would end. 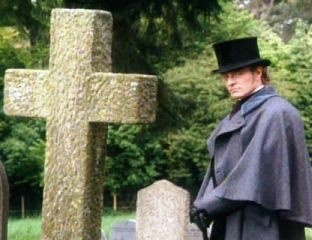 Despite my complaints about Scarlett, there is an audience out there who will adore this film. Period buffs, romance fans, folks who like to see Sean Bean stripped and oiled for now matter how brief a time- Scarlett is affordable enough for these indulgences. My set was $6.99 new. Gone with the Wind it is not, but take Scarlett for what it is; guilty visuals to sleep to.

Posted by Kristin Battestella at 11:19 PM No comments:

Here's our favorite books and music, as close as we we could find at The Fanlistings!


Music- no one else I like has a fanlisting!

Posted by Kristin Battestella at 10:19 PM No comments:

Here's some of our favorite television links!

Posted by Kristin Battestella at 10:17 PM No comments:

I've gathered just too many fanlistings, so we've broken them up in category posts. Enjoy!

Actors-listed alphabetically.  No other favoritism!

Posted by Kristin Battestella at 10:13 PM No comments: