The Bee Gees toured the globe and remained hit makers everywhere but the U.S. until newfound awards and appreciations in the late nineties. I myself was blown away upon hearing their fresh material, shocked to believe these were those same overplayed disco kings bringing the epic pop ballads that still stir the soul. 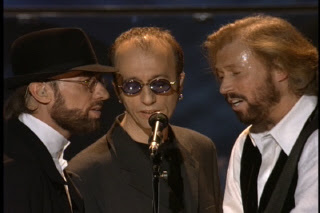 The Only Love – High Civilization is a peculiar, kind of sort of concept album, and this lone slow song can seem out of place amid the experimental electronic tracks. Fortunately, it's a superb power ballad hearkening to the early days while providing bittersweet growth, regret, and memories.

Secret Love – The shortest and best song on High Civilization, this Motown revival style is effortless and feel good familiar, telling a catchy pop story alongside “When He's Gone” and “Happy Ever After” as the pulsing pace and strong vocals mirror the whirlwind affair.

For Whom the Bell Tolls – Not only did time have no effect on The Bee Gees musically, but their complexity grew with age – as proven with this gem from Size Isn't Everything. Barry's breathy delivery and Robin's powerhouse chorus volley back and forth, fitting each brother perfectly while knocking the listener's socks off with big crescendos and tenderness in between for a soulful, spirited session.

How to Fall in Love Part 1 – To me, this later day Barry essential should be the backtrack to every movie love scene. The slow opening beats rise toward harmony with a sophisticated, six minute sublime. It's stirring, mature, and adult without being winking or crass, and it's easy to surmise what would be happening in Part 2.

Alone – This Still Waters standout is one of the best later day Bee Gees songs, if not thee best of the nineties that remains millennial modern. Twenty years after disco, a whole generation of fans heard The Bee Gees anew – myself included. The bagpipes, upbeat tempo, and sad lyrics casually blended as an enchanting ear worm were nothing like I had heard before, much less what I expected to hear from The Bee Gees. Can I say that Barry’s verses and Robin’s chorus make for a life changing event? Yes.

I Will – Outside of “Alone,” this is probably my favorite song on Still Waters, a carefully orchestrated love triangle in song with separate vocal pleas culminating in a magical, old world sound. Still Waters may have an over produced design with too many dubs and echos, yet on the individual track, that high concept arraignment lets the lofty notes shine. 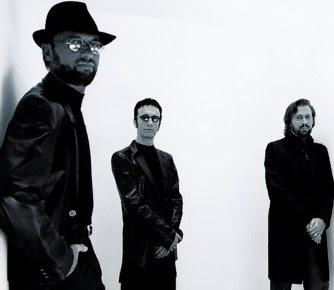 Rings Around the Moon – Where “I Will” unashamedly bellows, this B side is uplifting with its quiet whispers. It's poetic versus are peaceful and inspiring with a simmering assurance saying what it feels.

Emotion – You can't go wrong with the original Samantha Sang easy and breathless with Barry harmonies. However, the Brothers' recording on The Record tips a hat to the song's tender flexibility as Barry and Robin use the solid dual vocals to compliment the lyrical zest.

This is Where I Came In – This Is Where I Came In has a little bit of everything old and makes room for each brother to have something new, yet this single is retrospective with Maurice's rocking guitar rifts, alternating verses, and old school sass. There's a confidence with, why yes we are in the Rock and Roll Hall of Fame, but also a we aren't any grand pappy fuddy duddies, either. It's progressive and commands attention.

Walking on Air – Maurice's second track on This is Where I Came In isn't as dark as “Man in the Middle” but instead represents his catchy, fun side. The vocal overlays high and low as well as all the instruments are by Maurice, representing in many ways his own musical maturity here only a few years before his premature passing. Each refrain adds something, making for repeat listens that take on a bittersweet sound and keep you on your toes.

Wedding Day – The sappy woe is my love dittys are gone here, replaced with a lovely, confident song that may be the best Bee Gees song this century. Barry lays on the romantic verses and Robin brings the house down with the chorus. Their affirmations are finite thanks to top notch voices and strong, universal emotions. When you know, you know.

Embrace – Robin starts slow here in the same tempo as Barry's preceding “Loose Talk Costs Lives” before quickly escalating into a techno bop. It's surprising even as the modern beats come full circle, bringing the disco pedigree to the contemporary night club. The lovelorn echoes and up and down speeds actually make for a great workout song.

Islands in the Stream – Another old is new track released on The Record, here Robin returns Kenny and Dolly's famed country duet back to its songwriting origins with a modern R and B beat complete with a verse including “Ghetto Supastar” once again showcasing the strong Gibb versatility.

Come Tomorrow – Barbra Streisand's fresh duet with brother Barry leads off the Guilty Pleasures sequel collaboration with a smooth and jazzy, everything retro is new again. Barry’s Sinatra style ad-libs show through the mood and melodies while Barbra's delivery of the title is worth the wait.

One Night Only – When I first saw this in the summer of 1997, I hated The Bees Gees, and I've converted a few more naysayers with this dynamite concert. For more video splendor, seek out 2001's Live By Request and the three hour In Our Own Time biography bu-ray. 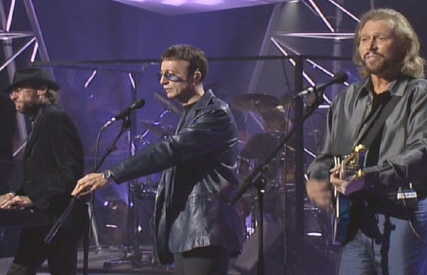 Despite more album re-issues, collaborations with the next generation of the Gibb family, and Barry's solo In the Now record, strangely I've not listened to any of these new materials. Die hard fan as I am, I find a certain comfort in knowing that even without Andy, Maurice, and Robin, there is still more Brothers Gibb music out there to live on and be there when I need it to be.

Posted by Kristin Battestella at 9:42 AM