This Is Where I Came In

Well then for my next trick I shall scrutinize This Is Where I Came In!
by Kristin Battestella

When I first got This Is Where I Came In, my favorite album was Still Waters. I didn’t think anything could be superior. I was wrong. This Is Where I Came In is, in my opinion, the best Bee Gees album. There is a little bit of everything old, plus a touch of new. It is retrospective, yet has the most up to date and even progressive styles. Unfortunately this is the last Bee Gees album as we know it! Let me tell you, The Bee Gees go out with a bang. 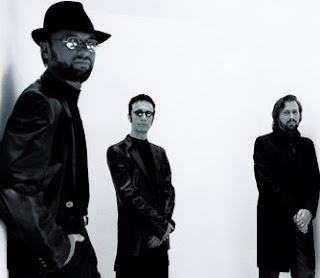 This Is Where I Came In opens with a very cool sound effect on the title track. Then Maurice’s guitar carries the tune. It’s not too difficult for one to shut out Robin and Barry and just pick up the guitar during the song. Robin and Barry alternate in the verses, but it is clear Robin’s trying to tone down his voice to be even with Barry. The one perhaps negative thing about the song is that Barry’s breathy rap seems a tad out of place with Robin’s very strong delivery.

The Robin fest continues in She Keeps on Coming. At first one one would not expect this to be a Bee Gees song. Indeed as the album progresses each song gets better, in my opinion. She Keeps on Coming takes off where the bluesy guitar sound of TIWICI left off and turns it into a rocking new wave type sound. It’s almost like the Talking Heads! Robin surprises yet again with a slightly different styled voice in this track.

Sacred Trust is the definitive breathy Barry song. One True Voice’s version is still on the charts, and I think the Backstreet Boys were stupid enough to turn it down! This might be the one typical Bee Gee song on the album, but it even tops in that department. While Barry sings breathy, Robin begins a sort of echoing chant in the background, similiar to With My Eyes Closed on Still Waters. The result is a great song, and one that will get stuck in your head.
Wedding Day is a lovely song. Barry sings the verses and then Robin brings the house down with the chorus. Songs like this truely amaze me. The boys have all been married for years, how do they know what someone’s wedding day is like? Not only are the music and voices superb on TIWICI, but the lyrics are top notch.

Man In The Middle is the first of two Maurice led songs. I would say this is the best Maurice song ever, but then there is Walking on Air three songs later! You can tell this is a very personal song, and many know Maurice was often caught in the middle between the lead personalities of Barry and Robin. It feels very blues driven and songs like this make you wonder why Maurice never went solo.
The first five songs of TIWICI I heard on A&E’s Live By Request, and yet the subltys of the studio versions still blew my mind. Now that I think on it the remaining 7 songs do have their Bee Gee roots, but on first listen it is all ‘WOW!’
Deja Vu blew my mind. It is the first of the Robin songs. Each brother split and recorded their own songs so everybody could be happy. Deja Vu has some very serious lyrics, and I for one always tend to think of Jesus when I hear it, but that’s just me. However, instead of being the orchestral broken heart Robin it has a very upbeat and rocking contemporarty tune. It even ends with a light hearted jab. Someone talking at the end saying ‘Are you Happy now?’
If Deja Vu is very modern, Barry’s Technicolor Dreams is a classic throw-back. The clarinet interludes are superb, and if somone played it for you, you would probably guess that it was made in maybe 1950. Barry sings in his easy natural voice and this is one you can’t help but get up and dance to.

If Technicolor Dreams doesn’t have you dancing, Walking On Air certainly will. Maurice second track for the album is composed entirely by him. The vocal, backing vocal, in both low and high parts, the guitar, keyboard, and drum programming. It isn’t as, let us say, dark as Man In The Middle, but it reflects the fun jubilant water loving side of Maurice. It is so catchy and rocking, and as usually with the Bee Gees, each verse and chorus are slightly different. Walking on Air keeps you on your toes and won’t leave your head. It’s my favorite on the album, and anyone who thinks Maurice is a nobody, hear this!
Loose Talk Costs Lives is very much in the Barry ‘Guilty’ sound style. The lyrics are very mature, and the arrangement is shaped perfectly around Barry’s breathy sound. That being said. It’s a very modern sounding sound with a lovely echo in the chorus, and proves that with the right arrangement and care, Barry can still keep you debating about whose voice is tops.
Embrace starts off slow, in the same tempo as Loose Talk Costs Lives, then quickly turns to a more techno tempo. This fact alone for days blew my mind. ‘Robin does techno? Robin does techno!’ Robin’s voice is in its element singing about love longing to a dance track. Which shouldn’t seem that surprising, since one can aruge techno is nothing more than modern disco. The lyrics are excellent, and the up and down speeds of the song will really have you shaking your hips, at least it does me.
After all that pick up, the brothers come together and the album slows to The Extra Mile. Originally done for the Olympics, this song will bring a tear to your eye if you are not prepared. The lyrics are so strong, and the orchestral background is excellent. Having said Orchestral, this does not mean the old Odessa sound. The Extra Mile sounds like it could be a John Williams score for a Star Wars movie. The verses are slow and Barry is on form, then the chorus enters and the trio is excellent. Robin once again brings the house down at the end. I’ve never heard him hold a note like that before!

The 12 track album ends with Voice In The Wilderness. When I listen to TIWICI at bedtime, I have to start at 6 and end at 5, because you will not fall asleep after listening to Voice in The Wilderness. Its all three brothers, plus the band rocking the place like a heavy metal concert. It reminds me of the Ramones, and is very easy to headbang too. The guitar interlude sounds like Slash or Joe Perry, not Alan Kendall! Again, one would not know this is a Bee Gees song! The album ends with the affirmation that the Bee Gees can do anything they set their minds to!

Of course, there are 3 more tracks released overseas or on the singles. And after hearing them, one wonders why they were ever left off the main album. Just in Case was shown on the Keppel Road biography way back in 1997. Here it is in its completed version, a sweet soft Bee Gees standard, but again one that one of today’s silly boy bands could easily attempt to do, and fail. Promise The Earth is another Robin outing. Again once you overcome the surprise, you’ll be humming it all day. And ironically, not humming words, but the beat and sound. Very progressive for Robin.

I Will Be There ends the extended album. It has a full circle feel to it. It sounds like a Bee Gees song, yet takes a step forward, combining the smooth sound of Sacred Trust with the upbeat style of Deja Vu. It’s lyrics are also quite a statement, and now looking back somewhat ironic. Or not. Indeed Barry, Robin, and Maurice’s time on earth will all eventually end, but through their music they will always be there to get you through.
Posted by Kristin Battestella at 12:15 AM