Are you ready for your Main Course?
by Kristin Battestella

The Bee Gees launched their second career with this 1975 release. The brothers had changed their sound, and did not appear on the album cover. (I had a tough time explaining to my niece why the cover picture is a naked lady in a spoon!)
Nights On Broadway was a hit, and brought about the birth of Barry’s falsetto sound. It’s excellently arranged and lyrically spectacular. Who hasn’t been inspired by those gosh darn sappy love songs and dopey romance movies?! Nights On Broadway perfectly captures that moment.
Now as much praise as I have for Broadway, Jive Talkin’ is not one of my favorite songs. In fact, it is one of three I nearly loathe. When this monster hit climbed the charts no one could believe it was the ‘Broken Hearted Bee Gees’. I was born after the Fever craze and had to almost relearn there was such a thing as the broken hearted sound. Jive is one of those songs that has probably been played to death. It’s a shame, it isn’t that bad, I suppose. To me the beat and voice arrangement seem at odds. You listen and decide ;0) (For more see our Fever review.) 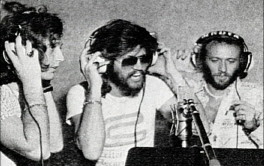 Wind of Change is the first song the brothers wrote for the album, indicating they were ready for a change. Main Course varies in style, and some dismiss it as a poorly constructed,uneven album. I disagree. There is something for everyone here. As much as I loathe the disco overkill, I like Wind of Change’s heartfelt lyrics and disco sound. The brothers could have literally picked which style with which they wanted to continue.
My case in point is in the fourth track, Songbird. It’s in the singer songwriter vein, similar to Elton John. Perhaps that’s its one fault, but the verses are masterful. Each has subtle changes so it never sounds the same twice. Redundant in their lack of redundancy!
Fanny Be Tender With My Love masters this idea. Each chorus is slightly different in arrangement, and you are just completely hooked and can’t wait to hear what they do next. The one issue I have with Main Course is, like Mr. Natural before, there is no Maurice lead. That being said, this may be the definitive Maurice album. Barry and Robin masterfully do Fanny’s lead, but Mo owns the echoes and harmony this album.
All This Making Love is another style change. The brothers go back to their Beatle roots a bit. A bit of Gibby humor is evident here as well. The brothers’ country roots, however, appear on Country Lanes and the subsequent Come on Over. Both Robin leads, the country style here fits his quavering sound perfectly. Again we don’t hear him much, but Country Lanes is made by Maurice’s vocal addition. Come on Over’s is lyrically excellent and was covered by Olivia Newton-John.

Edge of The Universe I take as the ’fun’ song of the album. The brothers claim it’s just about an alien and his dog, but I suspect something more mischievous! It’s also unusual at this time to hear Robin sing a more upbeat song. The lyrics are hysterical in their wackiness, and they will get stuck in your head.
As happy as Edge is, Baby As You Turn Away is a cleverly disguised sorrowful song. Barry and Maurice lead this the final song on Main Course. The arrangement is masterful, and it’s my favorite song on the album. Not every song on Main Course is for everyone, but it is a must in the budding fan’s collection.
Posted by Kristin Battestella at 3:06 PM