I stumbled upon The Field through a six degrees game on the imdb. The 1990 film based upon the play by John B. Keane stars Richard Harris, Sean Bean, and Tom Berenger, but The Field is more than a connecting degree. Stunning Irish landscapes, potent performances, and bittersweet storylines make The Field a delightful little film.

Bull McCabe (Richard Harris) and his son Tadgh (Sean Bean) are proud Irishmen who rent the field from the Widow (Frances Tomelty) They till the land with fertilizing seaweed and graze their animals on the field, but after years of being terrorized by Tadgh, The Widow decides to sell the field at a public auction. None of the townsfolk will dare bid against Bull, and he uses the town idiot Bird (John Heard) in his intimidation plans. Newly arrived Irish American developer (Tom Berenger) wants the field for a new roadway, and unfortunately, he doesn’t take Bull threats to heart. 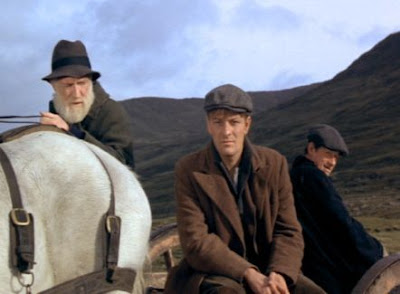 As refreshing as it is to see Sean Bean (Patriot Games, The Fellowship of The Ring) in a non villainous role, Richard Harris owns The Field. His Oscar nominated performance alone was worth the DVD purchase. Bull McCabe is just that, a bullheaded old school man who despises the English and those who couldn’t keep their land during the potato famine. Bull and his wife haven’t spoken to each other since their eldest son died 15 years prior, and Harris is superb at balancing the hardened laborer with the tortured father. When the pressure of purchasing the field under legal means becomes too much, Bull is willing to sacrifice himself, what’s left of his family, and anyone else who stands in his way. 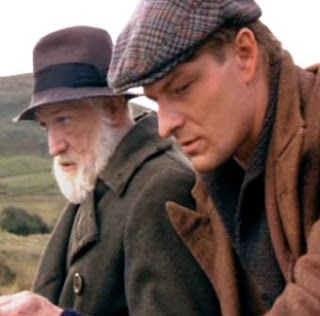 As stellar as Harris’ performance is, the role would be diminished without worthy support. Bean is admirable as the tormented Tadgh. He’s young, not the brightest bulb, and not all that interested in the field-which puts him in direct conflict with Bull. The Elephant Man star John Hurt is unrecognizable at Bird. He puts on the town idiot role inside and out-the tattered looks, stuttering, and do-anything-for-a- drink style is a sad representation of what happens to those who lost their livelihood during the famine. As much as Bull genuinely likes Bird, he’s not above manipulating him into his devious plans. Richard Harris may be the star, but each character in the field brings his or her element of tragedy.

Little seen in the upon its release, The Field has another ace the hole. The on Location Irish filming is a character unto itself. Briefly, you can understand Tom Berenger’s want to change this small tight nit Irish community. If it weren’t for his fancy car, you could swear The Field takes place in the 19th century. Horse draw carriages, no roads to speak of, thatched roof homes- the juxtaposition of this aging, strapped community against lush green and fertile land, stunning cliffscapes, and quaint Irish ways adds surprising depth to a film based on a play. These exceptional visual layers, however, can’t cover the thinness of the play turned movie. As bittersweet as the story is, some of its mystery elements are in fact too obvious to a film audience. The chain of events is a likely one, but the performances make the watch worthwhile.

Today’s American audiences might also find The Field slow or poorly directed. Naturally there’s no effects to speak of, and perhaps more monologues than we’re used to. With little action, there’s no need to move the camera either. Director’s slow zooming, following shots, or vast panoramas are meant to capture the scope of the region and the inner complexities of the characters. It’s not overtly art house styled, but viewers looking for something fast paced won’t find it in The Field.

Perhaps not commonly available at most retailers, The Field is more affordable at online purchasers. The DVD has no features beyond the film. I would have preferred a play to screen documentary and cast commentaries, but the film speaks for itself. Fans of Irish films and any of the actors involved should not miss The Field. Likewise classic film buffs or old school studies shouldn’t miss the tragic tale. Watch The Field today, ready with tissues instead of popcorn.

Posted by Kristin Battestella at 5:00 PM