So, Size Isn’t Everything, eh?
by Kristin Battestella

Paying For The Price Of Love leads off this 1993 album and was a solid hit for The Brothers outside of America. It’s beat driven tone is akin to the previous album, High Civilization, but it doesn’t seem as dark. Paying for the Price of Love raises the bar and sets the tone for the album. It rocks and has a sense of fun about itself. Kiss of Life continues this trend. Robin leads on the somewhat perverse lyrics and Barry expertly handles the chorus. The styles of the boys singing may seem at odds at times, but there is such a vocal hook that this song will get stuck in your head.

How To Fall In Love Part One is another staple in the Barry love song category. To me this song should be the backtrack to every love scene in a movie. The song starts of slow, with almost no music but a beat, then by the end the three part harmony is bringing down the house. The six minute ballad only brings up one question. Where’s Part Two?! I want my Part Two!! 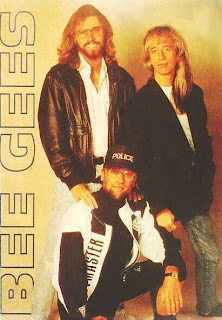 Omega Man is the first Maurice lead of the album. Mo was sober and very happy at the time, and Omega Man showcases his humor, and a bit of his nasty side. This album has an air of bravado. Just look at the title! It’s quite ambitious for these old timers to say they are going to do a pop album in the teen driven market. But they are brash enough and talented enough to do it.

After the joy of Omega Man, the very dark Haunted House will have you reeling in your seat. A great arrangement in lyrics and vocals by Barry and Robin. It is effectively creepy, but in a good way 80) Heart Like Mine has developed a strong love hate/relationship with Robinites. Some swear by its quavering and heart tugging delivery. Others find it one of the most annoying post disco songs. I think it depends on the mood your in. Along with Haunted House, Heart Like Mine almost brings you down from the high built up during the first four songs. When you want to cry, program the cd player for repeat, when you want to have fun skip it. Now that may seem harsh, but the versatility of The Bee Gees is one of my favorite things. With their impeccable catalogue, you can almost pick and choose which Bee Gees are your favorite. What other artist can you say that about?

Anything For You returns to the fun. It’s almost short on words, but the refrains are so skillfully done by the brothers you can’t help but sing along. Some dislike the modern emphasis on production, but Blue Island’s simplistic guitar arrangement is ingenious. The lyrics are impeccable, and they very much mean something. The underlying spirituality in this song is so subtle but so inspiring I redid my room in a Blue Island theme!

Above and Beyond is the second Maurice track on Size. Again a very fun piece with underlying lyrics that are so personal, yet touch everyone, and without making it obvious. Masterful. Second to last on Size is its monster hit, For Whom The Bell Tolls. Hit everywhere but the U.S. again. One of The Bee Gees power ballad staples. The arrangement of the broken hearted lyrics, combined with the modern crescendo is tops. Barry’s breathy delivery and Robin’s powerhouse chorus will knock your socks off. Tolls and the last track, Fallen Angel, are completely opposite styles with one thing in common; Robin sings them both. This alone amazed me for weeks. Angel is very fast and rocking and led very strongly by Robin, who has somehow tripled the power of the voice coming out of that little body.

Fortunately or unfortunately, Size began the modern system of putting B sides on singles but not putting them on an album. My Destiny and 855-7019 are two of this cream de la rare. Fortunately, I’ve heard and recommend My Destiny. Unfortunately I haven’t heard 855-7019. Despite this inconvience, Size Isn’t Everything is regarded by fans as one of the best Gibb albums post Fever. This album strengthens the debate that The Brothers seem to be better since the Fever craze. Size Isn’t Everything proves it is time to set aside your disco stigmas and give The Bee Gees another listen. A Must.
Posted by Kristin Battestella at 2:33 PM