What to say about Mr. Natural? Fans either seem to love or hate this one, but it should definately not be dismissed as it had been. Released in 1974, The Brothers were in a transition period, and the album was mostly ignored, although I don’t know why.

Charade (Which I always assumed was ‘Cha-raid’ is pronounced by the boys as ‘Cha-rod’) starts of the album slowly. Its lyrics are full of the beach and the ocean and makin’ love. This songs reminds me of the Love Shop scene in Logan’s Run! Barry and Robin alternate the lead in perfect fashion. The one problem I have with this album is there isn’t enough Maurice. Only two songs were written by all three brothers and I can hardly find Maurice doing backing vocals at all. I protest!
Throw a Penny speeds things up a bit. It sounds a little bit like an 80s after school special, but I like that. All the lyrics on this album are in top form. Each song has a story and a message that make them recognizable as Bee Gees songs, but the music is a step up from the early 70s sound.
Throw a Penny slides into Down The Road. The transition between the songs is very cool. Down The Road is very up and rocking and was often played live by the boys at the time. I thought Cucumber Castle was the top Soul Barry album, but Mr. Natural is most certainly in the running. Perhaps even a truer representative considering Robin is on this album.

Voices starts out similiar to I Started A Joke, but quickly establishes its own idenity. Again sharing a lead with Barry and Robin-the only contest in that department on this album is trying to figure whether its a ‘Barry-Robin Song’ or a ‘Robin-Barry Song.’ Voices I tend to think of as the latter. Its softer in the beginning and slowly picks up and becomes more powerful as soul Barry comes in. The music on the album is very noticeable and more previlant than previous Gibb music.
Give A Hand Take A Hand was written by the boys in 1969 and done by some PP Arnold dude. The boys take their song back and really belt it out. The words in the song are very powerful and telling. Again I think it is in the country gospel vein, perhaps since it was written in 69. I personally think this is what Cucumber Castle would have sounded like with Robin on it. His, well, whailing, completes Barry’s soulful delivery. This is also the one song that I think I can hear Maurice on. If anybody knows what parts are really him, please let me know!
Dogs is probably my favorite on the album. Its story is very universal, something everyone can relate to. Its slower verses, but kick ass chorus make me wonder how this song was not a hit. This song to me is proof the boys could still have their songwriter storytelling and major production in the music. Without this establishment, Main Course and the subsequent a ‘fever’ would not have happened. 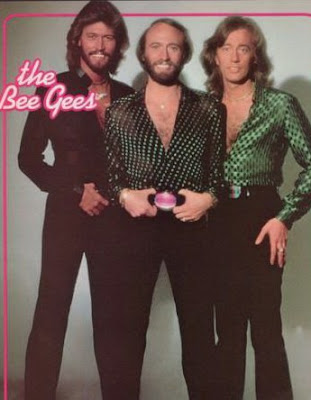 Mr. Natural is great and was one of the songs promoted at the album’s release, naturally. Again after hearing this song I don’t understand how it was so easily dismissed. Again Robin’s voice and the lyrics tug at your heartstrings, and this song will get stuck in your head. A year before this album, this song would have been so slow, in the vein of the singer-songwriter, but the upbeat speed and melody really set it off.
Next is a solo Barry outing, Lost in Your Love. This was the first song from the album I heard, and it was my favorite, until I heard the rest of the album! It’s distinctive in that it’s piano heavy, unlike the rest of the guitar driven album. Barry is on top, and the piano playing is very powerful in competition with his voice. It must be Maurice. Tempo, lyrics, everything in this song is perfect.
I Can’t Let You Go is back to the more progressive transition sound of the album. Again ‘traditional’ Gibb lyrics combined with a kick up musically. The arrangement of voices is also different on this album. They don’t seem to harmonize when you might expect it. The suprise is very effective.
I expected Heavy Breathing to be long and slow and sound like heavy breathing. It doesn’t. This might be the most shocking song on the album. At the time The Bee Gees had done nothing quite like this. They really do sound like a black seventies soul band on this song. The arrangement is so fresh and the guitar work is excellent. It reminds me of Cream, and I often wonder if Eric Clapton was in the studio with them on this song!
Had A Lot Of Love Last Night is the opposite of Heavy Breathing. This one I expected to be fast, but it is very slow and heartfelt. It finishes the album on the same note as Charade. The setup of starting and ending with slow songs makes nice bookends to the surprises in the middle.
It’s almost a shame they discovered falsetto and went on that path. Mr. Natural gives a very convincing argument about what might have happened had they continued in this soul vein. We got our answer with the release of This Is Where I Came In. The brothers themselves described that album as going back like they never did falsetto.
Now in retrospect Mr. Natural has become an elusive, but pivotal and critical must in the history of the Brothers Gibb. The word that comes to my mind with Mr. Natural is ‘vintage’. If it were a fine wine, it’d be just the right age now. Even my Mom likes this one!
Posted by Kristin Battestella at 5:24 PM