Who didn’t love to hate Sean Bean when the English actor first came onto the US radar in 1992’s Patriot Games? Following with another villainous turn in the initial Pierce Brosnan Bond flick Goldeneye (1995), it is no wonder American audiences didn’t begin to appreciate the versatile actor until Bean’s understated performance as the ill-fated Boromir in The Lord of The Rings: The Fellowship of the Ring.


Always popular overseas as Napoleonic hero Richard Sharpe in the British television series of the same name, Sean Bean’s most recent high profile American picture was this winter’s The Hitcher, a remake of the 1986 Rutger Hauer yarn about a psychotic hitchhiker who trails innocents and frames them for his crimes. Directed by famed music video helmsman Dave Meyers, The Hitcher boasts production support from mega action chairman Michael Bay (Armageddon, The Rock) and Matthew Cohan-who also fronted the edgy and popular remakes of The Amityville Horror and The Texas Chainsaw Massacre (as well as the sci-fi flick The Island-also starring Bean).
Unfortunately, The Hitcher failed to further shiver mid January movie going audiences. Incredibly short at under 1 hour 25 minutes, The Hitcher might have been over priced for theaters. Do however, look for the recent DVD release in your video store’s sale bin.
Now back to Sean Bean. Despite being a horror enthusiast, I wouldn’t have picked up The Hitcher for rising stars Sophia Bush or Zachary Knighton. Even cult favorite Neal McDonough (Star Trek: First Contact) was a pleasant surprise, but I won’t kid you-I bought The Hitcher for the 48 year old Bean. Once considered by fans as the most beloved Hauer film, The Hitcher now belongs to Sean Bean. 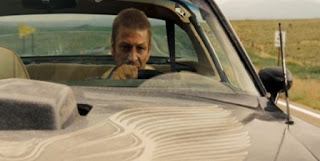 The Hitcher’s story begins when college cuties Grace Andrews (Bush) and Jim Halsey (Knighton) take off across the American Southwest for Spring Break-in a classic 442 no less. Unfortunately, after encountering seemingly pedestrian hitchhiker John Ryder (Bean), their lives quickly turn to carnage, terror, and high speed pursuit. Ryder initially attacks the couple, but they manage to escape him- only to find he has killed others and is framing them for his rampage. New Mexico State Police Lieutenant Eldridge (McDonough) pursues Grace and Jim-who look more and more like the killers with every turn.
I have to admit, I first though Sophia Bush to be one of President Bush’s daughters! Young starlets are so interchangeable in Hollywood today, and the B horror flick is often where new names perfect their death scene antics. The One Tree Hill star does hold her own here in the otherwise all male cast. Of course she looks the pretty for the part, but Bush carries an untraditional edge and non-blonde bimbo look that fits the ballsy chick here. Nothing against TV guester Zachary Knighton, but his performance was a dime a dozen. Screenwriter Eric Red was smart to turn this version’s focus on Grace-as opposed to the original’s hold on C. Thomas Howell’s Halsey. It’s 2007, yet Knighton’s look harkens back to the nineties grunge and skater style. I didn’t find it attractive then, and I certainly don’t believe this Jim will be the star of Spring Break any time soon. Whether it’s poor skill or by design, here Jim is a limp fish next to Bean’s Ryder.

While not exactly a sex symbol in the US in his day, Bean’s psycho turn here is nonetheless the most attractive thing in The Hitcher. Yes he’s older now, and well, he does have a big nose, but Bean’s command of these college kids is evident from the moment they almost hit him on the road. The complexity of Ryder-who is he? Where does he come from? What does he want?- is more interesting than seeing if Grace and Jim make it. It’s a horror flick-we know someone isn’t going to survive-but in some part of the back of your mind, you want that tawdry ending where Ryder walks off into the sunset to nab another wayward couple.

Although I expected the film to be billed as ‘And Sean Bean as The Hitcher’, he is rightfully given top billing, followed by Sophia Bush. He’s twice her age-old enough to be her father-yet Bean and Bush (hee) have some interesting chemistry onscreen. Maybe as a woman it’s the fear of rape, or perhaps its my one to many viewings of Bean in the steamy Lady Chatterley, but I was routing for physical action between these two for the duration. You can’t have a rugged, mean Bean and a short skirted Bush without some rough potential. Meyer does give the audience a fine balance of hints and foreplay and lots of f-bombed dialogue. Kudos also to whoever decided to give Sheffield born and bred Sean an American accent. Knowing his true and definitely British accent is being hidden here adds to Ryder’s creepiness. If even that isn’t true about Ryder, what else is there lying there, waiting?
While I haven’t seen the Rutger Hauer version of The Hitcher in some time, the 2007 version reminds me more of Stephen Spielberg’s early road rage classic Duel. Bean’s performance is akin to Duel’s crazy and dubious tractor trailer more so than Hauer. For myself, Blade Runner is the creepy Hauer flick and Ladyhawke is my favorite of his films. Hauer’s most iconic moment in The Hitcher, however, now belongs to Sean Bean. The ‘late model black thunderbird’ car chase and shoot ‘em up has even my honey rooting for villainous Bean. 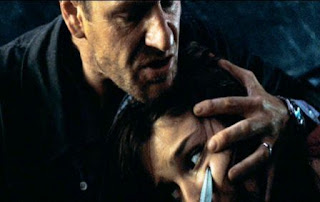 I’m a bit tired of remakes and sequels, and it’s a double edged sword to know The Hitcher is in Matthew Cohan’s line of horror revisits. On one hand, the story is very familiar, but then again, Cohan and his team have seemed to perfect the art of maintaining the best of the original and infusing it with modern filmmaking. The visuals and creative deaths in this Hitcher could not have been done in the eighties. Lighting, however, seems to suffer for Meyer’s fast paced music video style. Sometimes The Hitcher is almost too dark to see anything. Sure maybe it adds to atmosphere or mood, but we want to watch the action in the creepy desert jailhouse. Equally jarring is Meyer’s cuts to outside action. Beautiful open desert shots have even the actors noticeably squinting.
Another place The Hitcher misses more than hits is its somewhat low body count. Indeed perhaps it is even too short for its own horror/car chase genre. Near the end of the film, I found myself missing ensemble horror road trip films- where one by one the nobodys and bimbos are picked off. It might have been interesting to see Grace and Jim with a buddy couple who meets their end courtesy of John Ryder-or perhaps that scenario could have put the film beyond believability. The Hitcher is also partially undone with its over simple dialogue. Some of it is really great-Eldridge’s hick cop banter and Ryder’s ambiguous one liners bring humor and food for thought, but our couple utters too many cries along the lines of ‘What does he want? Why is he doing this?’. Even the bullseye gem ‘I’ll be back in 15 minutes’ makes a cameo. 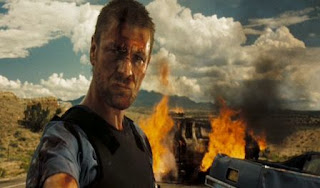 Although The Hitcher came and went in theaters, I expected the DVD release to have more features than it does. There’s an up close segment on Knighton and his definitive bloodfest scene, plus a detailed behind the scenes look with the complete cast and crew. For fans who want to know the ins and outs of all the car stunts-here it is. I was, however, disappointed with the deleted scenes and alternate ending. Outtakes would have been a real treat, but instead we get four different versions of how one hotel room scene could have gone down. Indeed deleted scenes are usually deleted for a reason, and the way that hotel room scene is finalized in the film is the superior outcome.
The alternate ending was a little over the top for theaters-as the cover promised-but not nearly as extreme as it could have been. The highlight of the features for me was Sophia Bush confessing she was really afraid of Sean Bean! 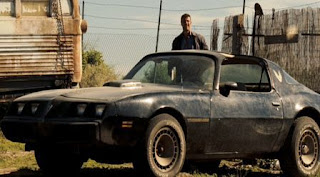 If you don’t like spooks, cars, and gore, then The Hitcher is not for you. Are there scarier and more gory horror films out there? More serious and hard core action, high speed thrillers? Of course, but you can’t find solid acting and character complexity in Jason X.
Perhaps what is the creepiest thing about The Hitcher is that this kind of road rage can happen and does happen. This film is a must see for Sean Bean fans or Sophia Bush lovers. Perhaps the question is not to purchase this DVD, but rather what would you do if one of the S.B.s was thumbing for a ride on your street?
Posted by Kristin Battestella at 4:09 PM

I am sorry I just can't agree! Yes Sean Bean is great but to try and be John Ryder - well it was really stupid. His co-stars were not very good either.
Rutger Hauer will always be The Hitcher.

Yes I guess it would be amust for Sean Bean fans. However anyone who has seen the original will know better. The original cannot be beaten due to all 3 of its stars especially the unmatched and creey performance by Rutger Hauer. Sorry

Disagreement is good-here anyway! ;0) It's tough to find young talent these days. Indeed without Bean the film wouldn't even be watchable. Hauer I've always preferred in Ladyhawke, but that's just me.

The Hitcher STILL belongs to Rutger Hauer. No way Sean Bean could top that performance.

Bean was good, but the remake was dreadful. The scriptwriter has less talent than a piece of wood, and let's not talk about the director.

Grace Andrews, by the way, was an utter and total Mary Sue.

The chemistry you speak of just wasn't there, and her GI Jane thing at the end only evoked laughter.

I'm SO glad it failed.

Thanks for posting Gregory!

I must admit, however, that I am curious as to why this review is the only one to garner any comments? Is it possible this is the only movie we disagree on? 80)

This review is being simulcast at Scars Magazine and The Mighty Bean!