How Old Are You

I should do a Robin solo album. I picked How Old Are You!
by Kristin Battestella

How Old Are You is the best of the Robin solo albums. Made in 1982, then released in 83, this was Robin’s second solo effort. The first, Robin’s Reign, came when the brothers split in 1969. In 82, Robin was in a new relationship, a new father, and he was making this album while on good terms with his brothers. All the songs on HOAY (I love sounding that out!) are composed by Robin and Maurice, and you can even hear Maurice backing on some of the songs.
Robin was clearly happy at this time, or at least happier than he was while making Robin’s Reign. This jubilance is evident in the first song, Juliet. It is a very happy go lucky bubbly song one would never expect from Robin Gibb. He sounds different, and sings quite high through the song and album. Sometimes you can’t understand what he’s saying. The album is very 80s sounding, but that doesn’t make it less enjoyable today. In fact, Juliet will really get stuck in your head. 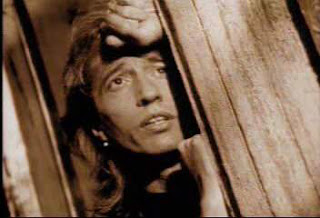 Next is the title song How Old Are You. This is one of the ones it seems you can also hear Maurice. It continues the upbeat style of Juliet. Actually there is no slow song on the album, or any of Robin’s 80s solo albums for that matter! The lyrics on the album are superb. Each song has a hook that will stuck in your head. The arrangements are also interesting. It is mosty just Robin in dubs and overdubs, with Maurice backing on some. However, Robin variates his voice within the songs and it sounds like three or four people at times. Very effective.

In and Out of Love is slower than the first two songs, but still very smooth. It has a bit more of an 80s sound to it, but I like the lyrics, and its one of the few where you can understand what Robin is saying. Even my mother likes this one. She kept asking me who it was, since she refused to believe it was Mr. Quiver Robin. Its interesting that before the 80s solo work, Robin always sang the really sad or sappy Bee Gees songs, but when the group comes together again for ESP, Robin is different. Stronger, more confident in himself and his voice.

Most of the songs on HOAY are ‘love songs’ or ‘girl leaves’ type songs, such as Kathy’s Gone. However, Kathy’s Gone is anything but sappy. This is another one my mom keeps telling me to play over, still in denial this is Robin Gibb singing. The whole album has such a pleasant surprise feel to it. I don’t think anyone expected this kind of strong material from Robin. Twits. Unforuntately, Robin’s solo albums weren’t released in the US. I don’t know why, they were successful in Europe. We Americans can be stupid sometimes.
Robin returns to the higher octaves for Don’t Stop The Night. This and others are story type songs, each has a story being told in it. Very effective lyricly, as is Another Lonely Night In New York. These two are the more somber songs of the album, but they are still upbeat. Combining the high in Don’t Stop the Night with the lower singing in Another Lonely Night in New York is an interesting and very sweet combination for the ears. (Robin updated Lonely Night in New York for his 2003 solo album Magnet.)

Danger is somewhat unique sounding in comparision with the rest of the album. The music is different, and Robin sings in a different voice. It’s a nice break from the higher singing. He Can’t Love You continues the ‘hook will get stuck in your head’ trend. This is the one song that perhaps sounds like the Robin people were expecting, probably because it is the one that sounds like a Bee Gees song. Great story song with a perfectly arranged chorus.

Hearts On Fire is another high song, as is the final song I Believe in Miracles. Hearts’ music seems to be in a different key, and the beat is very strong, which is a nice contrast to Robin’s high holding notes. This is perhaps the one traditional sounding Robin song. Miracles is in the same vein as Juliet, and is a strong finish to the album. I’m not sure what point Robin is trying to make in I Believe in Miracles, but by hearing the song, I for one believe he believes in miracles, and when the title line gets stuck in your head, you will believe in miracles too!
Posted by Kristin Battestella at 12:35 AM