The Lord of the Rings: The Return of the King

Book or Movie, Return of The King is a Must See (or Read)
By Kristin Battestella


My interests in The Lord of The Rings first peaked with I saw Return of the King. Not after waiting in line at a theater, but when it came out on DVD. I was a cashier at Sears, and the electronics department broadcast the 3 hour epic on all the display televisions. My stranglehold on playing Bee Gees DVDs was out voted, but I was willing to watch. Even though my first viewing of The Fellowship of the Ring was ambiguous, and I hadn't even seen The Two Towers, my first reaction after seeing Return of the King was Wow! Oh, and I cried, and I don't cry.


Despite all the special effects, big battles with ancient elephants- oh excuse me oliphants- and girls swooning over Orlando Bloom as Legolas, the big payoff of Frodo finally getting that albatross of a ring to Mount Doom is so emotional, powerful, masterfully done-spin the wheel of adjectives! In the beginning of the trilogy, faithful Gardner Samwise Gamgee (Sean Astin) is portrayed as equally insignificant as the small golden ring chained about Frodo's neck should seemingly be. Sam's power, however, is equal to, if not greater than the One Ring. Samwise's loyalty, honesty, friendship, and integrity are uncorruptable, and Sam is directly involved in the Ring's destruction. In the original book, Samwise is also the ring bearer for significantly longer than in Director Peter Jackson's telling.


Although some feel the ending of Return of The King drags on (Jack Nicholson famously so, as Elijah Wood tells on the extended DVD’s appendices), Peter Jackson and writers Fran Walsh and Philippa Boyens remain true to the book's conclusion. All the endings are resolved, from Aragorn's coronation to the Hobbits' return to the Shire and Frodo's final trip to the Grey Havens. Most of the book's five chapters after the destruction of the ring are attributed to, even hints of the Scouring of the Shire are found in the original Fellowship of the Ring movie. Despite its length, the theatrical version of Return of the King earned a slew of Oscars, including Best Picture and Adapted Screenplay. 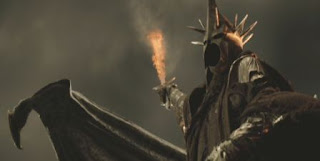 My obsession with Return of the King was solidified with the Extended Edition DVD. Indeed now I can't watch the 'short' version without noticing something's missing. Christopher Lee enthusiasts will enjoy Saruman's reworked, relocated, and restored death scene, and Viggo Mortenson lovers will enjoy the extended Paths of The Dead scenes.


At over 4 hours the extended third film definitely requires a comfortable seat. Extra dialogue (better with subtitles on), extended scenery and looks add to the depth and characters. My favorite additions are most definitely the Houses of Healing scenes. Beautiful music with vocals by Arwen actress Liv Tyler, gorgeous sets, and lush costumes highlight the resolution of Eowyn and Faramir's characters. Here two seemingly dead end supporting characters unite for another happy ending. It’s not wholly surprising considering the relationship between Aragorn and Arwen, but in the middle of the battle to end it all, Tolkien gives these people some sorely need romance. I can’t believe I said that!

Fans and skeptics alike have claimed The Lord of the Rings to be unfilmable. Peter Jackson comes close to perfection, but the gems left on the cutting floor and later found in the extended edition showed me there is indeed more in the book than cannot be filmed.
I'm a used book hunter. Why pay full price for a book when-if you search enough- you can find just about any book for under a dollar? The Hobbit- library sale. The Fellowship of the Ring- thrift store. The Two Towers- another library sale. The third part of JRR Tolkien's Lord of The Rings Trilogy Return of the King, however, has been elusive. Of all the books I've gotten for a dime a piece-Dickens, Shakespeare, Bibles to The Exorcist- Return of The King is one classic fans don't want to give up.


When I finally got my old, glorious, used paperback copy of Return of the King-for a dollar mind you-I was still reading The Two Towers. I couldn’t help but peak at some of my favorite movie scenes in the third book. The appendix and index also found after Return of the King are essential reads as well. Back story such as the love of Aragorn and Arwen and more invaluable history Tolkien himself could not fit into his epic are found here. As a writer myself part of me finds this footnote of Aragorn and Arwen inexcusable. Such meat of a story belongs in the story. Tolkien’s choice however, is masterful. The way other people in the books mention Aragorn and Arwen forbidden love strengthens the characters and the subtext.

Blossoming fans upset that they can’t search Google in Elvish will also love the Appendices. These treasure troves of information include Tolkien’s linguistic basics-everything from alphabets and runes to pronunciations. Beginner fans confused by the out of sequence storylines will also find a timeline of The War of the Ring. What happens to the Fellowship after the book is over is also touched upon, and these nuggets are worth the extra read. These are the kinds of characters you don’t want to leave behind.


The film and novel versions of Return of the King have their own nuances to be appreciated. Some of Tolkien’s wordiness and convoluted sequences I can do without. The Lord of the Rings as a whole is in many ways a very poorly written book. Repeated names, numerous flashbacks within flashbacks, here then gone characters, and even poor grammar. The quirks of foreign and aging language from Linguist Tolkien can however be forgiven. He does play up the idea that he is merely translating an ancient text, and The Lord of the Rings does read like history. This tone and language give the book its tag as an infamous hefty read.

One of the most difficult things one can do is recommend a book. What if he hates it? What do you tell her? Despite those fears, I take the plunge. The Lord of The Rings is one of a handful of books I recommend everyone should read at least once in their lifetime. Even considering the handful of significant differences between the novel and the movie, both are equal and accurate reflections of Tolkien’s world, just in different mediums. As I wept at the end of the movie, I also sniffled at the completion of reading Return of the King. I can’t believe I waited until I was 25 to read it.
Posted by Kristin Battestella at 3:19 PM