I always said I didn’t have the time to read The Lord of the Rings. Perhaps part of me thought it was too tough, long-winded, or overrated. But as a science fiction, fantasy and horror enthusiast, I felt I must have some sort of opinion on JRR Tolkien's definitive fantasy epic. The lives and legends of Middle-Earth took Tolkien a lifetime to produce, and since its first publication in 1956, millions of fans have read The Lord of the Rings-and demanded Elvish be declared an official language. 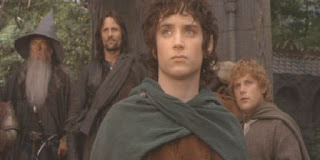 After seeing the Peter Jackson’s extended Lord of The Rings film trilogy, I finally yearn for more Middle-Earth. I dug out my thrift copy of the first installment, The Fellowship of the Ring. Those millions of fans worldwide were correct. So far for round one, the print has surpassed the film. In fact, I also recently saw the 1978 woefully bad cartoon version of The Lord of the Rings. Although it cuts off abruptly halfway through the story, some details in the cartoon are actually truer to The Fellowship of the Ring, and some details animated were dropped from Peter Jackson’s films altogether.

Even though there are countless writing mistakes and absolutely noncommercial storytelling early on in The Fellowship, Tolkien’s slow opening and back story set up the immensities to come. When I first started reading, I thought hobbits were little more than pothead drunkards. Now that I'm through The Fellowship, Frodo is like an old friend. His internal monologues and struggle with the One Ring are so much greater in the novel and truly can be captured on film.

The Elvish line drops dispersed throughout The Fellowship I can take, Tolkien's insistence on including hobbit songs and lyrical Elvish tales, I do however find irksome. I'm sure he means them as a back story narrative and additional character descriptions, but it's tough to read the words to a song without a tune. Tolkien's technique also slows down the linear narrative, sometimes with two or three pages of poems. For someone like myself, who is coming from the films and is not well versed in the history of Middle-Earth, these parts are almost skippable. On the other hand, Obsessive Luthian and Simrallion fans will enjoy Toklien’s attention to detail.

The early chapters of The Fellowship of the Ring describe The Shire in detail, but after the introduction of Strider in Bree, I was an able to put the book down. I carried it everywhere. Work, Bathtub, and to bed when I couldn't hold my eyes open. I skipped meals, and turned lunch breaks into silent sustained reading. I stayed up all night with a gallon of ice cream. Even though I knew the story, I had to continue. I didn’t know I could read so fast! The evil Ringwraiths pursuit of Frodo and their lust for the Ring are perfectly honed by Tolkien.

Novel fans of old already know The Fellowship of the Ring is good, an excellent work of humanity with the odds against them. If you are merely a fan of the films, I strongly recommend picking up a copy of the complete Lord of the Rings, available were most books are sold. Although younger fans might enjoy the more juvenile centered prequel entitled The Hobbit, and scholars may revel in starting at the beginning with The Simarillion, If you are a moviegoer and need a risk-free plunge, pick up the first installment of the Lord of The Rings trilogy. The Fellowship of the Ring is but the page turning tip of iceberg.

Posted by Kristin Battestella at 3:07 PM