The Lord of the Rings: The Two Towers

I always end up on the backend of a phenomenon-not really getting into something until everyone else has. Recently I’ve gotten involved with The Lord of The Rings fandom. Neh-I am certifiably obsessed! At least I am not obsessed alone. You know we are obsessed with The Lord of The Rings when my future husband found out my ring size by trying his replica One Ring on my finger. (A replica I bought him.) How did this craziness come about? Repeated viewings of The Two Towers Extended Edition that’s how.

I didn't see The Two Towers in the theater. I didn't see it when they came out on DVD. I watched the culminating third Return of the King movie before the middle Two Towers film. Only when both my father and future husband insisted I watch The Two Towers did I succumb. I liked it well enough, as I did the Fellowship of the Ring and more so Return of the King. My Tolkien obsession, however, did not really begin until we bought director Peter Jackson’s Extended Trilogy.
Fellowship’s extended scenes were exceptional enough. Tidbit book info here and there and additional character development. Nothing in the extended films is excessive, redundant, or unnecessary fluff. Jackson cut the film's only for length, I'm sure-the extended version of The Two Towers clocks in at over three hours. The extended footage of Eowyn, Faramir, and Boromir ice the extended version.

Although it is much more subtle in the books, Jackson's cut footage of Aragorn (Viggo Mortensen) and Eowyn (Miranda Otto) develops the crush subplot into a full-blown love triangle. In the extra scenes, you get the feeling that Aragorn does generally like Eowyn, and were it not for Arwen, or the Ring, or his destiny, he could settle in Rohan. We of course know different, and the bittersweet feel of the scenes is just the right flavor.

The real treat of the extended Two Towers is a lengthy flashback sequence involving Boromir (Sean Bean) before he journeys to the Council of Elrond. Denethor, Steward of Gondor and Boromir's father, wants The Ring for himself. Favorite son Boromir protests, but abides his father's wishes. Despite a loving relationship between Boromir and Faramir, Denethor nearly loathes his second son. Now that Boromir’s dead, Faramir wishes to take Frodo and The Ring simply to prove his worth to his father. Although they differ significantly from the book, these insights into the Steward family are exceptionally done. Skillfully acted and directed looks and glances do in 10 minutes what takes the book 10 pages.

These scenes and two key scenes added to Return of the King involving the relationship between Eowyn and Faramir impressed, shocked, and intrigued me so much, I started reading The Lord of the Rings. Peter Jackson's vision presented in the extended Two Towers is truly worthy if he can get me to read the books. I never felt I had the time to invest in the epic. Not that I really do now, but the tidbits restored in the extended Two Towers have me wanting more of Tolkien’s world. Who says books and movies have to compete? 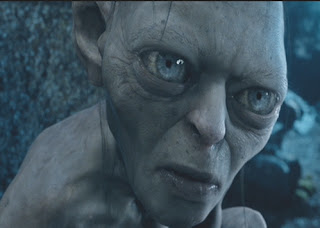 Not only are the movies superior, but the extended trilogy also hails two discs of behind the scenes appendices per film. The wealth of material here alone is worth the price tag (about $80) of the trilogy. Visit your favor retailer for the Extended Editions of The Lord of the Rings, available individually or as a box set.
Posted by Kristin Battestella at 3:15 PM

Don't worry...I'm certifiable too...and the Two Towers is my personal favorite of the trilogy...not that they're not all phenomenal, even if you have to set aside a chunk of your day to watch those extended versions (which is totally worth it).

Hi Kelly! Thanks for taking the time to stop by and comment.

I think I am seriously due for a TTT marathon indeed. The Fellowship and ROTK seem to be on TV a lot, but 2 not so much. It's actually my husband's favorite, too!