This time I’ve tackled Still Waters.
by Kristin Battestella
The boys were doing well in 1997. Hall of Fame Induction, the One Night Only wave. Twenty years after disco a whole generation of new fans were hearing the Bee Gees for the first time. I myself was one of these. My father had to force me to watch One Night Only, but the song Alone was what peaked my interests.
Alone, the first song from Still Waters, was like nothing I had ever heard before, much less like any of the Bee Gees music I had heard. The bagpipes and upbeat tempo should conflict with the saddening lyrics, but it all blends together perfectly with Barry’s verses and Robin’s chorus. I was alone at the time and again the feeling of ‘How do they know what its like?!’ sold me on this song. I listened to the MSN Album Preview of Still Waters, loved it, so I went and bought it. 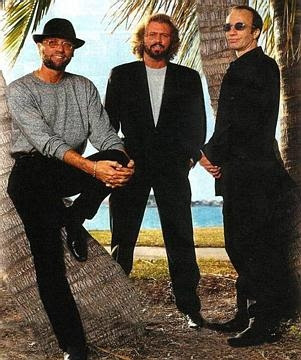 I Surrender sounds slightly different. Barry’s breathly lead is tops. The one complaint I’ve heard about this album is it is too much breathy Barry. You just have to be in the right mood, I guess. The harmony of the boys is great on this album, and the lyrics, well, one should not read them with their parents around!
I burned this cd for my sister, and the only song she liked was I Could Not Love You More. Its a great ballad, again I believe a stupid boy band turned it down. It’s the shortest song on the album, but its build up and lyrics are spectacular. Still Waters Run Deep is next, again with a great harmony in the chorus. There isn’t much Robin on this album, but imo SWRD and the next song My Lover’s Prayer are made by Robin’s interludes. My Lover’s Prayer is a great little song in the old fashioned doowop or acepella sound. One should really listen to this album with that special someone. If you can’t feel the love, something is wrong!
With My Eyes Closed is a very intruiging song. It doesn’t sound like a Bee Gees song, and Barry’s breathy rap may seem out of place with the music. That is until the second turnaround. Robin joins in the background with some sort of sultry chant. The chant fills in the gaps and the two voices come together like the two separated lovers the lyrics speak of. Very effective.

Irrestible Force is a funny one. You need to read the lyrics to understand what Robin is saying, and it took me awhile to understand them. ‘Are they talking about physics?!’ Let’s just say they are not. In the second half of the album, one may not like the echoes and overdubs or find them redunant, but I like the bridges full of harmonizing sounds.
Brother Mo time! Closer Than Close is Maurice’s contribution to the album, and really the only time you can honestly say you’re hearing him. The lyrics are very personal and Maurice’s delivery is well, DAMN! Again everytime you get a taste of Maurice you want to hear more!
Next is I Will, my favorite song on the album. It starts out sounding a little bit like that silly Titanic song, but Robin and Barry’s story of a love triangle is very well arranged and written, musically and lyrically.

Obsessions is a very intriguing listen. The Brothers refer to this as a ‘stalker song’. The extra effects in the song set it off, and some of my favorite perverse lines are in this one. Depending on your mood, you can either get into the groove or sleep quite pleasanty after listening to Still Waters. When I’ve got troubles I can listen to Still Waters, and well, it calms my turbulent waters still.
Miracles Happen is a very inspiring song. It was meant to be a Christmas song for the remake of A Miracle on 34th Street. Instead the song appears here. A boys choir joins the boys for some very heart-warming lyrics.
Smoke and Mirrors is the final song of the 12 track album. It’s strong and fast. You can hear seeds of Robin’s This Is Where I Came In sound in the lead. Supposedly this song is about the ‘smoke and mirrors’ of the business or something, and at one time this was to be the title of the album, but the boys chose to go the sweet and sexy route of the rest of the album. I’m glad they did. Whew!

Naturally, there are two more b-sides that didn’t make it onto the American release. Love Never Dies and Rings Around the Moon were part of the 1994 Love Songs project that never materialized. Love Never Dies is a powerful song from Robin and Maurice. I haven’t been able to find the lyrics for Rings Around the Moon, but what you hear in the song is very uplifting. This song deserves to be in the tops lists of Bee Gees Ballads. Still Waters seems to reflect the feelings of the brothers at the time. At peace with themselves enough to express themselves whole heartily and thus inspire others. So go listen and express yourself too!
Posted by Kristin Battestella at 5:19 PM