I'm Not Ready for This High Civilization, Me Thinks!
by Kristin Battestella

1991’s High Civilization is a complex, multi-faceted album. Please don’t let my title deceive you. Although it takes some getting used to, I like High Civilization. It’s just not an easy album to ‘get’-mentally or literally. If this is a concept album somebody please let me know!

Some fans believe the lead track High Civilization is about the Rapture. I can see a bit of that in the lyrics, but the music here often overtakes the voices. Each song here has its moments, but they seem to drag on a bit too long. Oddly enough, Secret Love is the shortest song. The album’s single returns to the brothers’ Motown revival style. The voices and tune are the catchiest (most catchy?) of the album.

When He’s Gone blends the styles of the first to tracks together well. Most of the leads here are split between Barry and Robin, or Robin and Barry, depending on your point of view. ;0) Happy Ever After is one of the better tracks here, with harmony! No big wig effects or instruments, harmony and sweet lyrics! Yes! Gone and Happy Ever After were both released as singles, but as usual, The United States is not on the same planet as the rest of the countries that actually like The Bee Gees. It’s a shame, there is quality stuff here that fits in musically with what was going on at the time. ARGH! Stupid Warner executives!

I hate to insult songs, I really do, but Party With No Name represents everything that’s wrong with this album. I’d still take it over Staying Alive and Jive Talkin’ though. 80) All you hear is the drums and the title line is the only words that are recognizable. It’s a very big ‘Huh?’ There is no harmony on this album, nor strong individual vocal performances. It’s very experimental, or conceptual, I’m not sure which.

Honestly the only thing I remember about Ghost Train is Robin wailing ‘Ride on my ghost train!’ which I find there is something kinky cool about that. Actually there are a lot of cool subtle effects on this track that only come up only on headphones. Dimensions is the Maurice song of the album. As usual per Maurice songs, Dimensions feels slightly different then the rest of the tracks. It’s a bit darker than Ghost Train. The music doesn’t overtake Mo’s vocals, which as a result, are much easier on the ears then the rest of the album. Now if only I could make heads or tails of what he’s saying! 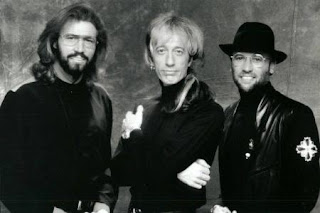 Finally! The Only Love! Perhaps the one recognizable Bee Gees song on the album. This power ballad is superb. Unfortunately, this lone slow song seems out of place here. I’m also surprised this wasn’t listed as a single. Bah humbug it should have been.

Human Sacrifice has one cool part, but it’s kind of creepy. Who wants to hear a song about human sacrifices? True Confessions also has its moments, but it sounds like left overs from Happy Ever After. Barry’s shrill voice seems at odds with the heavy drums.

Ahem. Evolution...Robin wrote this for his wife Dwina although Barry sings the erotic double talk lyrics about his sister-in-law’s ‘alternate lifestyle’. The first time I heard this song I couldn’t believe that they were singing about what I thought they were singing about. You really need to read the lyrics to understand this one. This closing track bookends well with High Civilization. I can see how there may be a concept at work here. The album has come full circle, for if you could look passed the sexual stereotypes in Evolution, maybe you would be ready for the High Civilization to come. I think that is what they mean. Yeah, maybe.

On a totally unrelated side note! About this time the brothers also penned Let Me Wake Up In Your Arms for Maurice’s first wife Lulu. Barry sings back up and Lulu’s voice is still top notch on this edgy ballad. To me it’s right up there with If I Can’t Have You. It’s one of those songs, even though it’s sung by a woman there is something distinctly Bee Gees about it, ironically unlike most of High Civilization!

Together High Civilization is a technical blur. Setting your player on random and having one of these songs come up is a much better way to appreciate the nuances of each song individually. It’s kind of like Staying Alive. An album of just that song, well, after a bit its just noise.
Posted by Kristin Battestella at 11:35 PM