To Whom It May Concern

I am concerned for the lack of concern for To Whom It May Concern! by Kristin Battestella

1973’s To Whom It May Concern is a complex album. It is, in my opinion, The Bee Gees Sergeant Pepper. I shall try and back that up, I promise! Run To Me leads off the album in traditional and modest Gibby success. This one is a staple that can’t be talked about or listened to enough. Arguably their best chorus ever! After the first track, however, the album takes a positive, but unexpected turn. 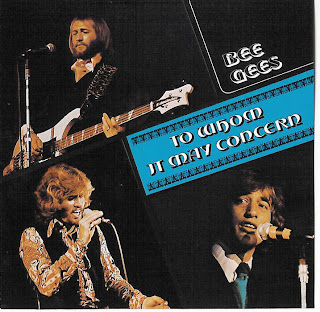 We Lost The Road is okay I guess. It continues the depressing vibe from Trafalgar. The b side cut My World should have been on the album instead. (We’ve reviewed My World and Run To Me on our Best Of Volume 2 rant here) Still We Lost the Road has some interesting read between the lines quality. Are they warning you they’ve gone off their rocker for this album? Maybe.
Woe is me Robin makes his first appearance on Never Been Alone. It sounds a lot like Robin’s solo material. Him and music that’s it. The lyrics are quite powerful. So raw and vulnerable yet with a sarcastic “Yeah I’m fine. Really! Totally!" hint that fits Robin perfectly.
Paper Mache, Cabbages, and Kings. Paper Mache, Cabbages, and Kings! In discussing with other Gibb-ologists, this song is often mentioned, but with little details. I often wondered what was so special about a song titled Paper Mache, Cabbages, and Kings. It is never even mentioned in the song! Well now I know, but I can’t tell...Okay you forced me into it! The song begins with some sort of circus music and talk of elephants. That glorious wtf? thought comes to mind! Then the tune changes into pure harmony that sounds like its straight out of Pepper. The interlude is the most incredible turnaround I think I’ve ever heard in a song. Barry is pouting about his heart being broken like paper mache. At first I thought that was the dumbest line I’ve ever heard. You would think they could come up with something a little less child-like! But then, Robin repeats the same line and it is so gut wrenching and tear jerking. You know that feeling after you’ve argued with someone and you back against a wall, then sink to the floor and just sit there crying? Picture that vocalized! Suddenly the title makes sense. Your heart’s paper mache, you’re the cabbage, and the person that broke it is king. Do I get a prize? >80)
I Can Bring Love is the Barry ballad of the album. I’m not sure of the details on the singles for this album, but I Can Bring Love could have been an ‘acceptable’ Gibb single. The traditional simplicity of Barry and a guitar, damn. The voice and songwriting is here, and it’s smarty placed in between the two wackiest songs on the album. With the success of How Can You Mend a Broken Heart, Whom feels like the brothers are stretching their creative muscles here. Sure we can do Heart, and Run To Me, and I Can Bring Love, but can you handle the rest of us?!

Whom is a tough album to review, because everyone takes every song differently. I Held A Party, every time I hear it I myself think something different. You might have to be on something to understand it. This man in the song Berkworth...Do they just drink together? Get it on? Willingly? Unwillingly?! Is he an imaginary friend?! I just don’t know!! But it sounds dang cool. Very Tommy-ish.
I have one complaint about Please Don’t Turn Out The Lights. It’s too damn short. It really only has one verse followed by perhaps the most impeccable harmonizing I’ve ever heard. Making it more than two minutes might have ruined it, but when repeated three times in a row the song still sounds fine to me!
Sea Of Smiling Faces is surprisingly an upbeat song in what so far has seemed like a bit of a dark album. It has a swayablitiy and a catchy vibe about it. Barry and Robin trade off the leads on most of the album, but Maurice can be heard just as much in the harmony. There are three distinct voices on this album: Barry’s, Robin’s, and The Harmony. Of course Maurice is what makes the harmony. That’s what I’ve been trying to tell you people! ;0)
The record just wouldn’t be complete if there wasn’t a rock out song! Bad, Bad Dreams fills that role to perfection and still manages to have those ‘exactly how I feel!’ lyrics. As loud and rocking as Dreams is, You Know It’s For You does the exact same thing with just Maurice and a few instruments. His voice is so easy and again very Beatle-esque here. It’s so simple and sing along. I’m mean Duh! What else is there? You Know It’s For You!


Previously we praised Alive in our Best of Volume 2 review. It’s track placement here is perfect. It’s calling out the listener as if to say, ‘Do You like what we’ve done?’ However, it’s not the end of the album. How could the last two songs possibly top this figurative finger to the genre?

Road To Alaska is definitely the more recognizable Bee Gees song of the last two tracks. It’s a little bit country with a cool sound effect in the middle. One of 3 fast songs led by Robin prior to 1980! This was the flip side of Run To Me, and in a way deceives the audience into thinking this was all the album was about.
As happy as Road To Alaska is, Sweet Song Of Summer no one in a million years would ever have pegged as a Bee Gees song. It’s main instrument is a moog synthesizer, need I say more? It’s a bit creepy at first, but after you listen to it enough, you can almost hear how the instrument sounds just like the brother’s voices. Or maybe they sound like it? It’s so out there it’s friggin cool.
Fans of the early story song Gibb music may not like To Whom It May Concern. The tightly woven ingredients are all here, but it might have been too out there for the easy listening fans of How Can You Mend a Broken Heart. I can see how fans may have tuned out and eventually forced the brothers to change their sound back to a more listener and dance friendly sound. I don’t know if the creative concepts of To Whom It May Concern were intentional by the boys or not, but the album is definitely a unique look into the mind’s of these musical geniuses.

Posted by Kristin Battestella at 11:17 PM