Homicide: Life on The Street, Season 4 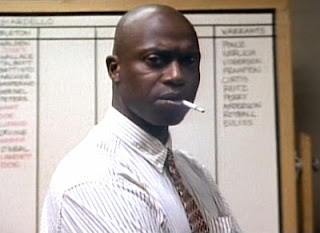 Always a critical darling but never a ratings winner, Homicide: Life on the Street survived for seven seasons on NBC. After Emmy success and high profile guest stars in its shortened first three seasons, Homicide’s studio executives insisted on changes in an attempt to grab ratings. Even with studio interference, Season 4 of Homicide is still top notch.

It seems like a lot I know, and it’s tough to summarize Homicide’s complexities without giving everything away. Some purists dislike Kellerman’s introduction to the series and the poor handling of Megan Russert, but each have their it moments this season. Kellerman is presented as a studio induced pretty combination of Felton and Bolander. He’s divorced but still in love with his ex, sometimes juvenile-admitting he dreams of Bugs Bunny. Kellerman acts like he’s a frat boy on the outside, declaring “Fun is my God”, yet he can’t quit smoking and eventually shares some of his issues with new partner Meldrick Lewis (Clark Johnson). Lewis, of course, is still getting over Crosetti’s suicide. 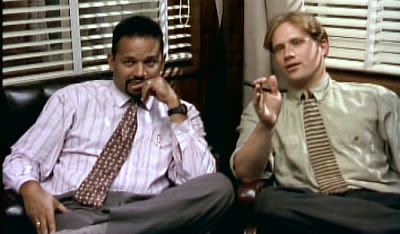 One of Homicide’s strengths is it’s lack of one off stories or stand alone episodes. Crosetti, Russert’s affair with Felton, these issues from Season 3 aren’t forgotten. Season 4 does lose a touch of the show’s early ensemble feel. Instead we begin the focus of pairings and partnerships. Munch suffers the most from this. Without Bolander, his comedic wit and banter suffer, but this Munch is still superior than his touch and go appearances currently seen (or not seen) on Law and Order: Special Victims Unit. Of course, Homicide staples Pembleton and Bayliss have their share of stand out episodes and bonding experiences. 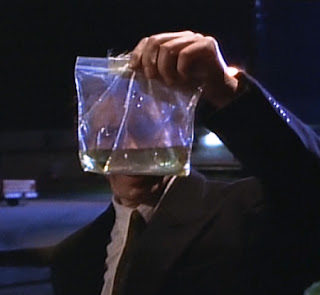 Of course, when any show takes the cast change plunge, it can make or break a series. Homicide could not maintain the edgy work it does without its exceptional cast. Braugher (Glory) is in Emmy form again, particularly in the special two part crossover with Law and Order. Although her role is slightly reduced on the show, Melissa Leo continues to bring new dimensions to the already unconventional Howard. Yaphet Kotto brings more light to oft passed over Lieutenant Giardello, and most surprising of all is perhaps Clark Johnson as Detective Lewis. His family life, potential problems with women as authority, and relationship with Kellerman becomes in some ways the heart of the series. As much as some early fans love the Lewis and Crosetti pairing, there simply wasn’t enough of it when compared to the amount of time and issues that spring from Meldrick and “Detective Mikey”.

Not to be outdone, the standout episodes of Homicide this season still belong to Pembleton and Bayliss. Although guest star Marcia Gay Harden is the focus of the fourth episode “A Doll’s Eyes”, Homicide’s signature detectives are caught in a family’s difficult decision of what to do when their son is shot and left brain dead. Although he lost his faith in season 3, Pembleton’s religious conflicts are still very much at the forefront. Braugher and the Homicide writing team know when to give the perfect dialogue -“God wasn’t returning calls that day” (in the “For God and Country” L&O crossover) or just let the image speak for itself-like when Pembleton sneaks into a back room to watch the Pope visit Baltimore. Tim Bayliss is also never without issue. Kyle Secor walks a tough line between being over dramatic and just right for the sensitive detective. He revisits his unsolved first case in “Requiem for Adena” and debates his homophobic issues in “Hate Crimes”. 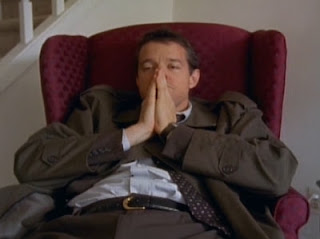 Homicide never seems like a special sweeps episode even though each hour tackles real life issues and touchy subjects. The pop score and musical montages never seem out of place in such a rugged, yet sensitive show. It’s 1995 and Homicide is talking about gay bashing and immigration problems, work politics, and race relations. Homicide is ingenious in its play on ‘it’s not an issue, but it is.’ Pembleton’s declaration in “Hate Crimes” is that ‘We learn how to hate.’ It’s very true, nearly a fact, actually. Everyone knows it, but nobody actually says it. Some much dialogue on Homicide is like a revelation. Writer David Simon and producer James Yoshimura’s work is fascinating in contrast with tales of studio memos telling them there are too many black actors onscreen at once.


Unfortunately, Homicide: Life on the Street DVDs are nearly devoid of special features. The case file interface is cool, but audio commentaries and behind the scenes shorts are few and far between. The extras are no less insightful-I just wish there were more. Another hardship is the lack of subtitles as well. Such crisp dialogue should be there for all to see. It’s so refreshing to hear such tight and life like yet makes-you-think writing on a television show. 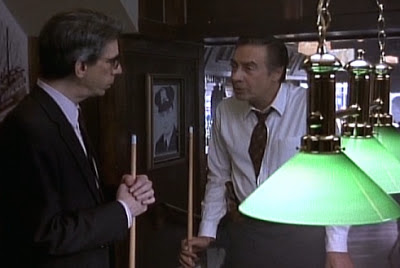 I know I’ve probably meandered more than a review should here, but it is impossible to capture everything about a season of Homicide in so little. Even in reviewing episodes one at a time, I doubt a viewer could keep track of all the references, subtext, comparisons and characterizations. I can barely keep track of Kellerman’s bad ties and his penchant for eating in every single episode. It’s quirky things like this that fascinate me. Even bottle type episodes leave their mark on Homicide. You really learn to know and love everyone on the show, the squad room, Baltimore itself. One of the things that initially attracted me to the show was its real city look. I’ve been to Baltimore many times. I live near crime ridden and downtrodden cities like Camden and Philadelphia. It surprises me to know Homicide reruns are popular in Europe. Maybe they don’t understand the absurdity of deliberately overturning a truck on North 95, but the people and emotions presented ring true for any culture. 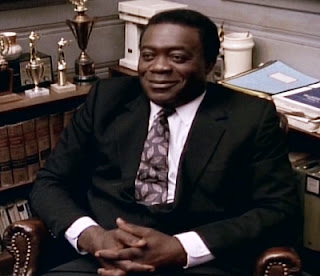 Although I don’t think kids can understand all of its subtleness, Homicide is an intelligent option for tween viewing. The show helped break a lot of television barriers, and unfortunately controversies like mild language, drug use, and violence are now nothing new to younger demographics. After finding a lot of Homicide fans online, I learned many of them are educators or students who use episodes in their lectures and thesis-although its tough to pick just one episode out of so many great ones.

The education and experience of watching Homicide: Life on the Street cannot be found on television today. A cop show about the cops. ! If you’re a fan of The Shield, SVU, The Wire, or any other cop show, Homicide has to be witnessed. The complete mega set and later seasons can be pricey, but look for sales or used editions of the first Season 1 and 2 set. Against network odds and pressures then and now, season four of Homicide: Life on the Street is still better than anything on television today. Strike or no strike.

Posted by Kristin Battestella at 11:43 PM

thanks for nice links...i like this show very much,when i watch this show first time from then i see this show regular and never missed,you can download homicide-life-on-the-street tv show with the help of given link

Thanks for stopping by Stake!

Homicide is one of those shows that has been in syndication much, and it's not at sites like Hulu yet, either. The sets are available on Netflix at least, and the prices have come down a lot.

I need to review the rest of the series!