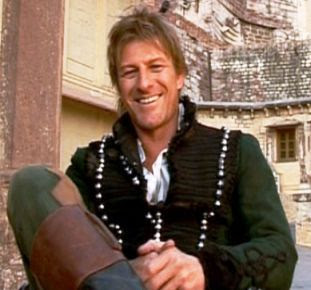 After a ten year break, the BBC returned to its Napoleonic series Sharpe in 2006 with Sharpe’s Challenge. Based on the novels by Bernard Cornwell, this special two part episode is slim on premise but big on action and exotic locales.

Five years after , Richard Sharpe (Sean Bean) is now alone on his farm in after his French lover’s death. He is suddenly summoned to by Lord Wellington (Hugh Fraser), and at first declines the chance to put down an uprising in . ’s first agent in , horse trader Patrick Harper (Daragh O’Malley), however, has gone missing. Sharpe finds Harper once he reaches , and together they must rescue damsels in distress and overthrow corrupt Indian warlords. 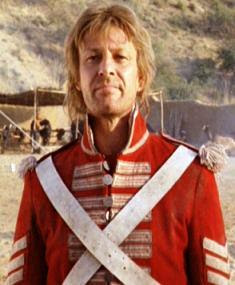 Sharpe’s Challenge is an awkward tale to summarize. On one hand its moving forward, taking place after , but it is a composite of ’s early Sharpe novels Tiger, Triumph, and Fortress. This mix of the two time periods automatically sets Challenge up for conflicting story points and even anger from die hard fans. If Sharpe’s lover Lucille is dead, long time writer Russell Lewis and director Tom Clegg have erased two of Sharpe’s children. Oops. Now that I’ve gone back to read Sharpe’s Tiger I can see where pieces have appeared in Challenge. Its strange to read about Private Sharpe under Sergeant Hakeswill in Tiger when Challenge merely gives us a briefly red coated and pony tailed Bean. Could the powers that be have made a full length trilogy with some new young folk as Sharpe? Bean is no spring chicken, but in this day of reimagings and remakes I’m glad the production has stuck with its fans.

Challenge brings back all of our old Sharpe favorites. It’s great that everyone was willing to come back and storylines were made to accommodate , the decrepit Simmerson (Michael Cochrane), even Ramona. There’s a few snafus regarding characters who were killed earlier in the series that are somehow alive and well here, and Sergeant Bickerstaff is clearly a poor man’s Hakeswill. Sean Bean however, is on form, and the reunion with Daragh O’Malley makes Challenge. The guest stars for Sharpe’s Challenge seem more high end than the series of old. Padme Lakshmi (Now of Top Chef who I knew from her dreadful guest spot on ) is perfectly cast as the icy and exotic Madhuvanthi. I did however expect more from Toby Stephens (Robin Hood, Die Another Day) He just grimaces and pursues his lips a lot and says kinky things. I imagine some British gals find this very pretty, but we’ve seen better, uglier and nastier villains in Sharpe. 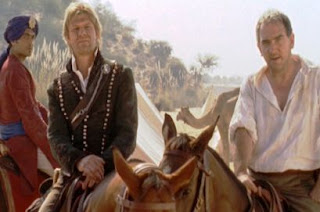 Challenge does give us something we haven’t seen in Sharpe before: . Despite the story’s confusions, was by far the best move for Challenge and future Sharpe productions. Some of the battles seem dusty and small scale, almost like the first film Sharpe’s Rifles where the logistics were still being figured out. On the whole, however, the cultural changes, use of native scenery, historical sites, and local extras give Challenge an extra flair. I’m not sure how accurate the ladies’ costumes are to the period, but they are very bright in what has been a somewhat dark and drab series. And they show some skin, always important for male viewers! At last it seems that technology has finally caught up to the fun stories and action Sharpe has told. Challenge looks so big, bright, and epic. I’m glad this episode is longer than the previous ninety minute installments. The look and excitement of Challenge tell us there’s still fuel left in Sharpe’s engine. And shocker of shockers what does my Sharpe’s Challenge DVD have? Extras, by golly I kid you not! Although the behind the scenes feature has a silly, aloof focus on an Indian extra’s quest to meet Sean Bean, these long awaited insights into the Sharpe series are more than welcome. Fight choreography, interviews with Cornwell and the cast, humorous on set moments. Not all of it is stellar material, but after fourteen Sharpe movies with no extras, I’ll take it! What else am I loving on my Sharpe’s Challenge DVD? The bloopers? The photo gallery? No, the subtitles! 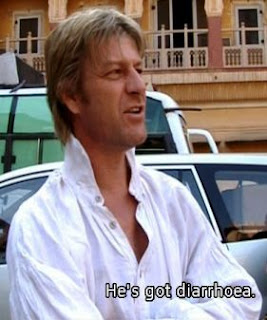 Sharpe’s Challenge is a must for Sean Bean fans and Sharpe collectors. You’re complete collection is now incomplete without it. Challenge may not be perfect, but the spirit of Sharpe is alive and well here. A new telefilm, Sharpe’s Peril, is airing across the pond soon. Is Sharpe’s Challenge the introductory film to a new Sharpe series? I hope so!

Posted by Kristin Battestella at 1:50 AM

Don't forget that all our Sharpe film reviews are simulcast at The Mighty Bean website!

For a separate review on Sharpe's Tiger check out

It was Itv not BBC who aired Sharpe.