Not Much Changed between Dr. No and Never Say Never Again.
By Kristin Battestella

I’m not a serious, die-hard Bond aficionado, but I know what you’re thinking: Surely she knows Never Say Never Again is a remake of Thunderball! Indeed the return of Sean Connery in the illegitimate 1983 Never takes its roots from Thunderball, but my recent viewing of the first EON release Dr. No had me thinking about how little the franchise changed between the original Bond’s first and last appearances.
MI6 agent 007 James Bond (Connery) is sent to to investigate the disappearance of fellow British Intelligence operative John Strangways and quickly falls into foreign intrigue and local superstition. CIA Agent Felix Lieter (Jack Lord) and local fisherman Quarrel (John Kitzmiller) have both heard ill news about Dr. No and his dragon on nearby Crab Key. Bond sets off for the island and must infiltrate Dr. No’s forces before the SPECTRE (that’s SPecial Executive for Counter-intelligence, Terrorism, Revenge, and Extortion) agent can disrupt an American space launch.
Twelve years after his last mission, 007 (Connery again) isn’t ready to leave MI6 just yet, despite changes in the program orchestrated by the new M (Edward Fox). M doesn’t feel Bond has what it takes to be a secret agent in this day and age, but after the theft of two nuclear warheads by SPECTRE agent Maximillian Lago, Bond is back in the game.
Naturally I should begin with the technically not first but still definitive Bond Girl Ursula Andress (What’s New Pussycat, Clash of the Titans) in comparison with unofficially official Bond Girl Kim Basinger. Dr. No’s Honey Rider is truly little more than eye candy. She doesn’t appear until the latter third of the film, and Andress’ voice was dubbed over, further proving it was not her acting delivery that the production wanted. Despite quiet moments explaining Honey’s sad back-story, one has to wonder what she could possibly be there for if not her Swiss good looks. An exceptional woman scavenging for sea shells who just happens to get mixed up in Bond’s plot to take down Dr. No? Sure, it’s why many guys like Bond flicks-heck, its part of why I like them! Unfortunately, the tongue in cheek treatment of women in early features is another nail in the dated coffin. Recent Bond pictures have to have intelligent, independent women worth more than just a subservient romp.
You would think Oscar winner Basinger ( Confidential) would have some of those progressive eighties working women vibes, but she is also the picture of a girl under a man’s thumb. I would say Basinger is very un-Italian looking for such a character, but my father’s family is full of tall, fair Northern Italians. Still, there’s no vocal inkling of exotic , either. We meet Domino Petachi while she’s dancing in her eighties leotards and follow her vengeance against former lover Lago through her barely there slips and towels. Again, it’s not a matter of if she’ll be used and bedded by Bond, but when. Never Say Never Again departs from the norm by suggesting Bond retires with Domino, but can we really see a lasting relationship here? I think not. 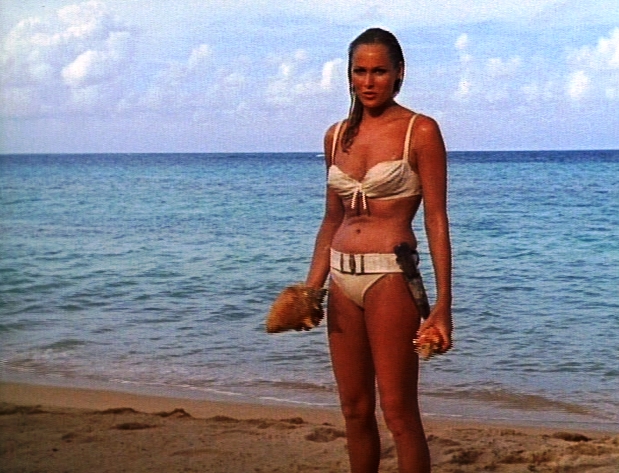 That was entirely too Bond-savvy of you, Kristin. Come to think of it, Never Say Never Again is the only one I'd never see ever again. Oh and maybe Man With the Golden Gun--that lame hick sheriff completely ruined it for me.

Thanks for stopping by, Robert! Yes, I put too much thought into Bond, I can't help myself. Some gems and some really clunkers yet they all follow the same basic pattern. In theory, if you like one, you should like them all. I love the marathons on tv where I can just put it on and take a look when I hear the theme-meaning something good is going on!