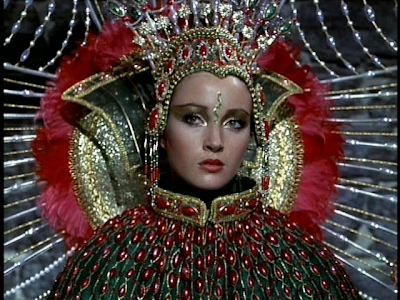 Generally considered at the low end of the James Bond franchise, I like Live and Let Die for its introduction of new Bond Roger Moore and slick performance by Yaphet Kotto. Unfortunately, stereotypical portrayals of Harlem and along with a hefty dose of blaxploitation styling make some portions of Live and Let Die too dated and out of touch with the rest of the series.
MI6 Agent 007 (Moore) travels to to investigate several murders, including the death of a fellow agent. Clues at Mr. Big’s New York Club lead Bond to and dictator Kanaga (Yaphett Kotto). Along with CIA agent Rosie Carver (Gloria Hendry), Bond travels to San Monique, where boatman Quarrel Jr. (Roy Stewart) helps him rescue the lovely Solitaire (Jane Seymour) from Kanaga’s voodoo practices and drug trafficking.
Some Bond pictures tend to drag or go on too long, but the short length of Live and Let Die is just right. Bond does what he has to do and that’s that. We’ve got the action and the babes, but ’s lighthearted tenure begins here with quick pacing and tongue in cheek scenarios. Though Live and Let Die has its faults, Roger Moore isn’t too bad here. Using a magnetic watch to unzip an Italian hottie in his opening scene puts in the cool column. Some of the crocodile sequences and voodoo displays are silly, yes, but these are not his fault. Had been given a tighter, darker script, maybe his sardonic portrayal and less rugged Bond might have developed differently.
Also charming up the cast for Live and Let Die are Yaphet Kotto (Homicide: Life on the Street) and Jane Seymour (Dr. Quinn, Medicine Woman). I like both, so even in the weaker parts of the film, Seymour and Kotto show their talent. Again, some scenes are very silly, from Kotto’s obvious dual role as Kanaga and Mr. Big to Solitaire’s virginal end at the hands of Bond. Solitaire is beautiful and Kanaga is slick, but their dialogue isn’t very strong. Both are merely vehicles for Bond to do his outlandish things. Screenwriter Tom Mankiewicz (Diamonds Are Forever, The Man with the Golden Gun) and director Guy Hamilton (Goldfinger, Diamonds Are Forever, The Man with the Golden Gun) focus more on black stereotypes and seventies motifs of the day rather than giving what could have been an exceptional leading trio something truly meaty. Drugs and tarot cards definitely seem weak after all of SPECTRE’s world domination plans.
Now, some blaxplotation pictures are less derogatory than others and are still pretty good. Unfortunately, Live and Let Die is not one of them. Not only are all the seventies afros and dress very dated, but every black cliché has its moment. Turncoat agent Rosie Carver sports an afro wig and meets her demise after spending the night with WASP Bond. But of course, we don’t see Kanaga bagging Solitaire, do we? I don’t know how accurate the voodoo motifs are, but they don’t look authentic. In fact, all the snakes and skulls rising from the ground are laughable. Even if the opening funeral and jazzy murder are done right, the depictions of Harlem, , and the Fillet of Soul restaurants are just too, well, racist. Bond likes some chocolate love on the side while rescuing the white virgin from the big black badass! I don’t know how this could have been acceptable in 1973, and you definitely could not get away with making so blatant a picture today. Even redneck cops make an appearance! 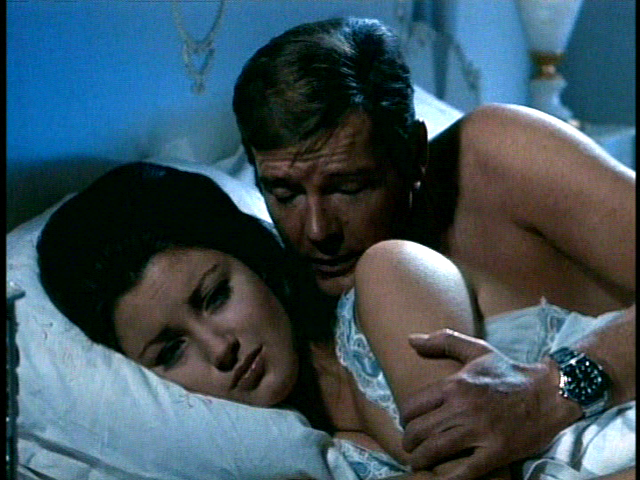 On a better note, who doesn’t love Paul McCartney and Wings’ thunderous Live and Let Die theme? The voodoo title sequence leaves something to be desired, but this is definitely one of the more famous Bond tunes. However, I do wish there was a little less of this gem and a little more of the traditional Bond theme spotlighting throughout the picture. In one scene, a sultry black woman sings Live and Let Die in part of a set up against Bond. It’s not bad, but again it’s a touch of stereotypical blackness that Live and Let Die doesn’t need. After such success with previous Bond vocalist Shirley Bassey, I think this little scene is a slap in the face. Black Bond girls are bad and only good for their jive turkey music for the white boy secret agent! I’m so glad that with kick ass girls like Michelle Yeoh and , this franchise has resolved its early Black and Asian stereotypes. Live and Let Die certainly has its faults, including a weak story and racist overtones. Thankfully, there are some fine action sequences. Even though we traded the loveable Q for bad voodoo, Bond still has great chases-including cool uses of a double decker bus and an extensive boat chase. Bond gets the babes, of course, and the bad guys get their due. In the end, there isn’t much else to ask for in a Bond picture, is there?
Dated and imperfect, Live and Let Die still has a fine cast and solid action. The stereotypical blaxplotation style is not for everyone, but I imagine die-hard Bond fans can dismiss this fault as a sign of the times. Oft aired on television and affordable as an individual DVD, Live and Let Die is available in several collections and bluray sets as well. I really wish the Bond collections were packaged by Bond. The Volume 1 Bluray set hails Dr. No, Live and Let Die, and Die Another Day. Which fans is this set for, and why do they always have a consensus clunker stuck amid the good ones? Collectors no doubt own Live and Let Die, but fans of the cast should also give this one another chance. Some of it is certainly better than the rest, but one can say that about the Bond franchise itself, can’t he?
Posted by Kristin Battestella at 1:23 AM