This Time of Year, You Just Can’t Get Enough Christopher Lee. Period.
By Kristin Battestella
Well, I suppose the title says it all. With whom else can you share your scary, dark autumn nights? 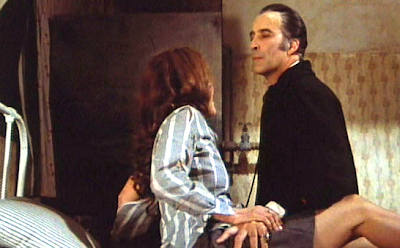 The Devil's Bride – Frequent Hammer director Terrence Fisher (Dracula: Prince of Darkness) helms this elusive 1968 satanic fest in which Christopher Lee is the good guy. Whoa.  Let’s just take in that power of performance right there.  One of his personal film favorites, Lee ups the ante- using all his coy, charisma, and stature for the occult heroics and parental considerations here.  He looks damn classy, and Charles Gray (Diamonds Are Forever) is dynamite as well. Two Bond villains for the price of one- that has to be worth a look!  Leon Greene (A Funny Thing Happened on the Way to the Forum) as Big C’s sidekick starts out as a little stereotypical chum chum disbelieving cheerio, but he takes up the cause wonderfully- though I don’t really understand why an English guy was dubbed for an English movie? The thirties via sixties style is also suave: sweet roadsters and English country car chases, cool suits, and great frocks all around.  Sigh, candlestick phones!  We have genuine frights, smart mystery, and fun cloak and dagger action along with great color and decent, scary effects.  If the eyes are the window to the soul indeed…shudder.  Though I’m not sure of the actual details, the rituals are realistic and the occult material is intelligently handled for a dang good time. Now if only the DVD- also titled The Devil Rides Out – wasn’t so damn tough to find!
Horror Hotel – This 1960 low budget scary also called The City of the Dead opens with a 1692 good and wicked burning at the stake and it only gets freakier from there.  Yes, it looks a little poor in quality, is too dark sometimes, and the hep cat guys are a dime a dozen.  The fog and flickering firelight, however, add heaps of disturbia, and we just know this sinister- er sleepy hamlet isn’t what it seems. Investigating ingénue Venetia Stevenson (Island of Lost Women) is a sunny and fun fish out of water we can get behind as she blindly plunges deeper into the Massachusetts bizarre.  Sir Christopher is of course smashing as a deathly serious but young and oh so suave professor who knows his witchcraft history too well. Even in the seemingly forgotten 80 minutes here, his contribution is essential, his performance quintessential.  Toss in a swanky score and you have all the brewing ingredients needed for future Amicus Productions’ horror gems. Who knew?
To the Devil a Daughter – Though it may look old, this 1976 satanic thriller boasts a great cast- including reluctant occult expert Richard Widmark (Cheyenne Autumn), juicy dame Honor Blackman (Goldfinger), unaware but not so young and innocent would be nun Nastassja Kinski (Cat People), and fearing for the err of his ways Denholm Elliot (Raiders of the Lost Ark).  Now then, let’s top all that off with a downright frightening Big C, too!  This one is very bizarre to start; the rituals are totally kinky, and the intentions are absolutely disturbing.  Lee’s Father Michael is even scarier than his Dracula- perhaps because he is a real soulless man of flesh with such a wicked, wicked agenda.  Yes, the ending is a little flat- resorting to abstract demon talk and psychedelic colors after all that great intelligence and paranoia.  But it’s damn good in getting there, and I’m not sure why there’s so little fanfare about this one.  I really liked it!
The Torture Chamber of Dr. Sadism– AKA Castle of the Walking Dead, Blood of the Virgins, and a hundred other dang titles- it’s tough to find much about this 1967 Lee murder fest co-starring Lex Barker (Tarzan) and Karin Dor (You Only Live Twice).  It’s a pity because whatever you call it, this one’s not bad at all.  Sure, it looks and sounds poor- again thanks to the lack of proper love and restoration- but the production values are actually pretty period piece good.  The costumes and décor are colorful, the locations authentic looking, the atmosphere scary, the dungeons dark and frightening.  Although I must say, the credited inspiration from The Pit and the Pendulum doesn’t come until quite late in the film, and some of the cutesy sixties music may seem out of place to audiences enjoying the spooky or mature camp.  Sir Christopher’s role is unfortunately small, but damn memorable and gruesomely well played.  While it can be found on several horror double bills in multiple languages and cuts, sadly, I’m not really sure what’s going on with all these cheapy video editions and versions here.  Bottom line; catch a viewing of this one anytime you can.
Posted by Kristin Battestella at 1:59 AM

I'm all about Horror Express!!!

Horror Express was in our 2nd Lee List I think, and a Cushing volume is coming up next!!

Thanks for stopping by!

Horror Hotel is on Hulu, and it looks like it is free!