The Hollow Crown a Delightful Shakespeare Presentation
by Kristin Battestella 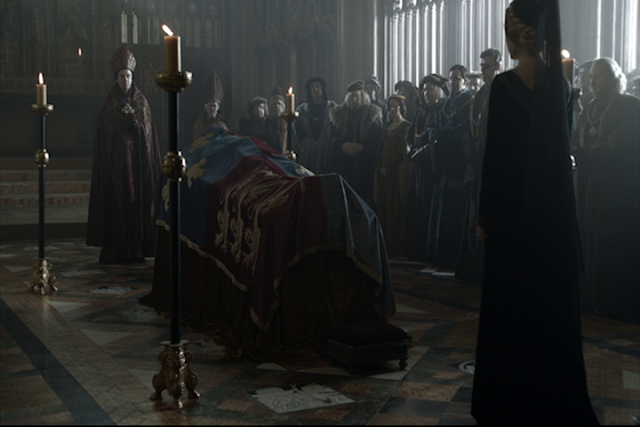 Richard II – BAFTA winner Ben Whishaw (Skyfall), Patrick Stewart (X-Men), Rory Kinnear (Penny Dreadful), David Morrissey (The Walking Dead), David Suchet (Poirot), James Purefoy (The Following) and more impressive players anchor this first telefilm alongside colorful draped fabrics, regal armor, and medieval chorales setting the 14th century mood. Despite great historical locations, coastal scenery, horses, and jousts, the design still feels somewhat stage-like or fittingly small scale – our ensemble sits ready to speak in open stone halls rightfully situated not for royal splendor but rather what's being said. Fortunately, the delivery here is smooth and dramatic without hefty, preachy dictation. This court tension just happens to be in old speaketh, and we're not merely watching a play being read aloud the way so many stateside high schoolers erroneously experience Shakespeare. Of course, it does help to know the history at work – Gloucester, Bolingbroke, Plantagenets, ambiguous effemininity. Subtitles are necessary, and scholars may enjoy having a hand held copy handy to compare text. At two and a half hours, there are perhaps some unnecessary to and fro scenes where folks only move to go and talk somewhere different. Arty, overly fancy transition shots; incredibly dark, difficult to see scenes; and distorted, up close camerawork symbolizing the askew mentalities at work make for some tough visuals on top of already difficult and often confusing Shakespearean dialogue. Ironically, thanks to the sophisticated accents and pretty pentameter, this treasonous spearhead is quite pleasant just listening to it! Richard is petty, unlikable, pretentious, out of touch, juvenile, and, well, Kardashian. Understandably the audience expects his downfall yet we can't look away as he questions his kingship, grows conflicted by his actions, and realizes mistakes made in a messianic fall from grace. This is not an easy part to play, but Whishaw embodies the misunderstood boy and undiagnosed but somehow poetic madness. We don't want to choose sides in this comeuppance even as we look for the neutral historical end – after all, both Richard and the future Henry IV do some despicable stuff. There's sympathy, humanity, and a perfectly bittersweet glory in this usurp.

Henry IV Part I – Jeremy Irons (Reversal of Fortune), Simon Russell Beale (Penny Dreadful), Tom Hiddleston (The Avengers), Michelle Dockery (Downton Abbey), Julie Walters (Billy Elliot), and Maxine Peake (Silk) get Episode 2 of The Hollow Crown off to a bustling, ye olde start with medieval markets, lively music, crowded pubs, and drunken good times. Though candlelit charming with wooden sets and a rustic mood, the interiors can be somewhat dark to see. Fortunately, those impoverished designs fittingly contrast the cold, bleak, echoing, stone court full of depressing somber and arguments – a higher up but not as fun place. Again it helps to know the history in the interim from Richard II – Hotspur, Northumberland, Scottish rifts – and the intercut but separate storylines may seem confusing or uneven if one is unfamiliar with the mix of serious court intrigue and cheeky Boar's Head Inn. It takes half the two hour time for the plots to come together, however its dynamite when they do. While Joe Armstrong's (Robin Hood) Percy revolts and Harry Lloyd's (Game of Thrones) pretentiousness aren't as exciting as they should be, Dockery keeps their dilemma interesting. Ironically, although everything is set in motion because of him, we don't see Irons as the titular king very much. He mumbles somewhat as well but his voice carries the proper weight on the king's shoulders low gravitas– uneasy lies the head that wears the crown and all that. Hiddleston's longer blonde hair isn't my favorite look, either, but he is distractingly pretty as the red leather bound, rakish about town Prince Hal. This is an indulgent viewing for fans just as much as scholars can delight in his rolling off the tongue delivery. He's relishing the role and why not? We so often treat Shakespeare with dread, but these are happy drunken antics well balanced with bawdy fun, serious voiceover soliloquies, and proving one's worth. Hiddleston also does a great impression of Irons, and BAFTA winner Beale is a wonderful Falstaff – a fool not quite ready to leave his selfish ways but lovable even when crude or up to no good. With so many multi-layered characters arcs and performances to follow into Part II, this definitely takes more than one viewing. As fine as we expect Bill's words to be, the between the lines are delightful alongside the small scale but cinematic filming and action-centric Shrewsbury finale. 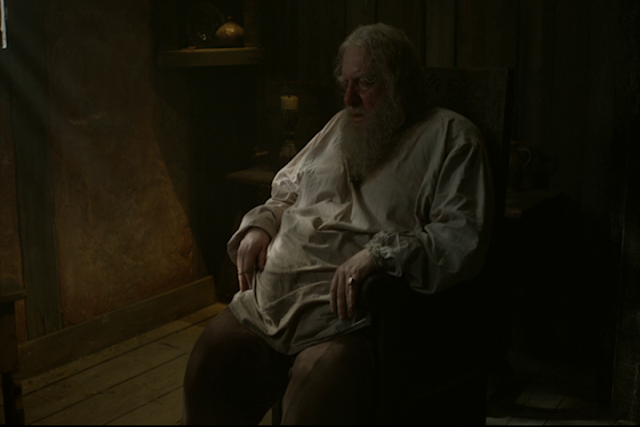 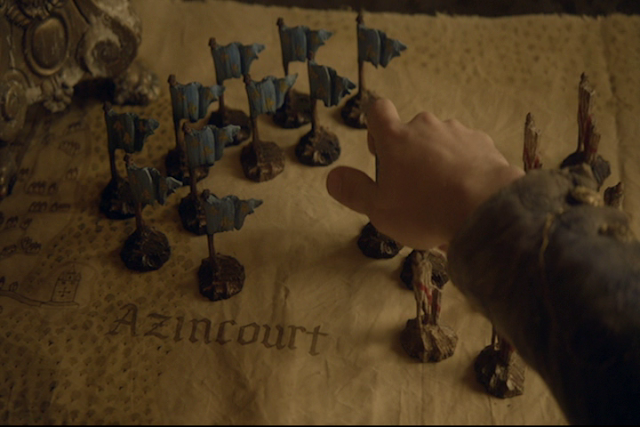 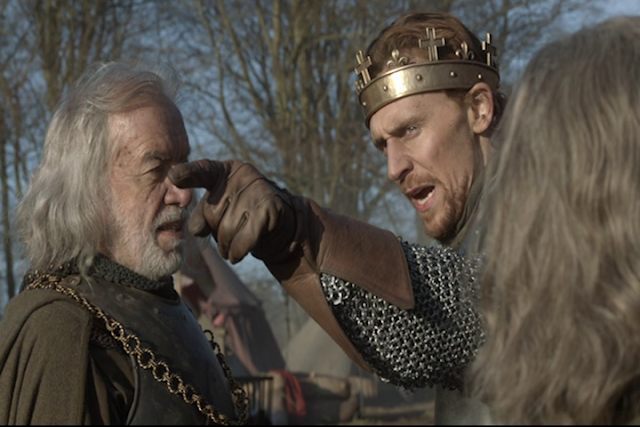 Henry IV Part II – Unlike the cashing in of unnecessarily divided blockbusters, this historical second half was filmed by returning director Richard Eyre (Notes on a Scandal) back to back with its predecessor, utilizing the same locales and cast with choice additions such as Ian Glen (Game of Thrones). Unfortunately, other new and seemingly unimportant secondary characters aren't properly introduced alongside the thin and increasingly somber source material. The pace drags in the middle, growing boring or feeling overlong when the interesting journeys and people we care about are offscreen. The music still creates a quaint atmosphere, however congested arguing on top of the jigs can be frustrating to discern for the non Bard versed. Thankfully, the melancholy court, Latin prayers, and whispering political asides accent the medieval mood. This is a darker picture, with blue hues for castle ills and a tainted yellow patina for Eastcheap before uplifting music, pomp ceremony, and fresh reds and golds reset the tone for Henry V. Jeremy Irons looks increasingly sickly with bleak soliloquies and tender, wise dimension for his sons adding reflection amid his failing health. It's depressing how the separate storylines all sink low despite battle victory and would be elevations, but nonetheless, the intertwined and reversed fates beautifully reveal themselves. Though raised up, Falstaff sticks to his old tricks, using his chance for a clean start for more foolish thinking – like presuming he would be the right hand man for fun and games under King Hal. We can't hate Falstaff thanks to bittersweet ponderings and tender scenes with Maxine Peake as Doll Tearsheet, but he's both too old to right himself and too set in his crooked ways. Prince Hal's so called friends all tail him for their own best interests, but he has to make the big decision to grow up and put away his trouble making pals. We know the history and strife, yet it's still wonderful to see Hal pondering with Henry IV, realizing Falstaff for what he really is, and accepting the right path between his two flawed father figures. Hiddleston appears a half hour in to Part II as the shirtless and charming Hal, however, he seems to have less screen time until his confrontation with Falstaff halfway through – his red leather jacket appears briefly in Hal's only Boar's Head scene before gradual outfit changes suggest the regal velvets to come for the brilliant finale. This final act forgives any sagging with its fathers and sons, deathbed vigils, and tearful men becoming noble kings. There's no time to mourn when the torch is passed, nor is it any easier when the crown goes from one head to the next instead of being built on battlefield legacies. There's a nice behind the scenes feature on this disc discussing both Henry IV parts, and though uneven, this episode does what it sets out to do in making us eager to see what happens to its successor.

Henry V – These final two hours plus of The Hollow Crown make some eponymous changes – from a subdued St. Crispin's Day moment and skipped battlefield carnage to omitted side plots and excised humor. While the music, costuming, Latin funerary, blue for France flair, and red for England palette are charming, the saturated screen is often too dark to see. Up close, congested, slow motion fighting also intentionally hides the small scale production, and at times oft theatre director Thea Sharrock seems to play it safe by not fully utilizing the camera or making any political or warfare statements as this material is ripe to do. The action is also slow to start, with almost twenty minutes of courtiers chirping the pros and cons in each king's ears about Edward the Black Prince and claims upon France before the build to Agincourt and a final romantic but short lived French alliance. The ensemble does well, but the new players aren't properly introduced, creating little endearment beyond the Harry we know and love. The now top billed Tom Hiddleston looks different as Henry V, aged with a goatee, darker hair, and in the field grit. Although he's not an over the top big battle commander, Hiddleston has a gravitas both with words and on horseback. Harry can be personal, soft spoken, and religious whilst also not backing down from leading from the front despite internal fears, lovely prayers, and serious soliloquies. This king is humble and in arms with his men, honest and full of grace but certainly capable of the bombastic and unmerciful. The private battle speeches fit this characterization and keep the focus on the individual before the spectacle as a good play should. Shakespeare perhaps glorified the past but this Henry is a man first and a hero second. This episode wisely stays with Henry most of the time, reducing Pistol, Nym, Bardolph and unnecessary humor. Lambert Wilson (Timeline) is comparatively somber as the King of France, and despite only a few scenes, Melanie Thierry (Babylon A.D.) is immediately enchanting in what could be an awkward courtship. The French lessons are not translated on screen, which may annoy some, however this softened, continental appeal adds to the stage-like mood where Sharrock directs best. I hate to say it as it would be inaccurate to not have the imaginative, descriptive Chorus as narrated by John Hurt (Alien), but if you can see the ships and scenery, you don't need the voiceover, and the characters could have just said the transitions themselves. Fortunately, the script is the thing here, with famous lines and history turned drama discussed in several behind the scenes bonus features. Granted there are production flaws and questionable direction at times. However, this is a great, easy to get behind story, and the condensed plots and reduce battle focus make for a classroom friendly viewing or scholarly discussion. 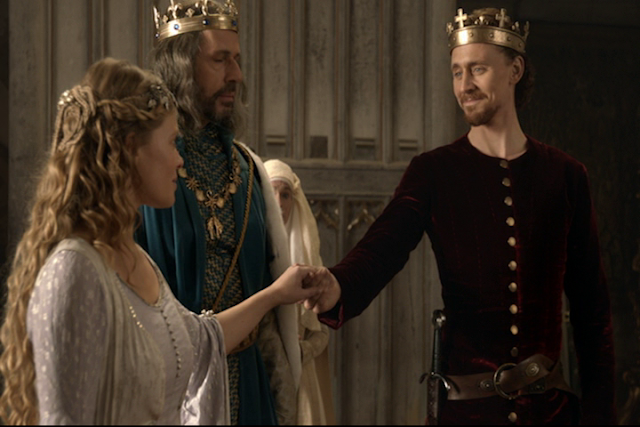 Posted by Kristin Battestella at 10:48 PM