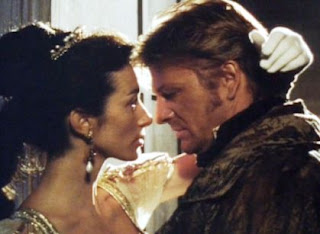 Alrighty folks! Here we are. The end of the end. Really, I mean it! Well… now we know there’s more Sharpe, but in 1997, was it. It’s a fitting place to break the Napoleonic series based on the novels by Bernard Cornwell.

Now that Napoleon has escaped , Sharpe (Sean Bean) has his French lover Lucille’s (Cecile Paoli) blessing to fight again. Now a Lieutenant Colonel on the Prince of Orange’s (Paul Bettany) staff, Sharpe is joined by ever loyal Patrick Harper (Daragh O’Malley), and Rifleman Harris (Jason Salkey) and Daniel Hagman (John Tams) for this last hurrah. Sharpe’s estranged wife Jane (Abigail Cruttenden) wants a piece of the grand action for herself, even convincing her spineless lover Lord Rossendale (Alexis Denisof) to kill Sharpe. Amid the battles and the balls, all of allied Europe is converging on . Sharpe’s reason to fight, however, is a modest one. Just once he wants to see Napoleon for himself. 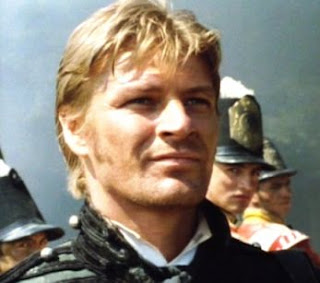 I’ve said before that Sharpe episodes tend to pack a lot into their near two hour running time. But the Battle of Waterloo is perhaps as big as one can get. Director Tom Clegg and writer Charles Wood expertly blend the private battles and internal storylines of the Sharpe series amid complex historic action. In such a well documented and oft studied event, it might be tough to find a crevice for Sharpe, but his place amid the battle is realistic and believable. Everyone has his or her moment, and only a feeling of pride trails . We’ve been with the Chosen Men from the beginning- twenty two hours from to and . Now the viewer can’t help but cheer as Sharpe marches into the sunset. Although the previous episodes have always ended with Sharpe’s march away from the camera (and we know Challenge now follows) ’s concluding scene is perfection. 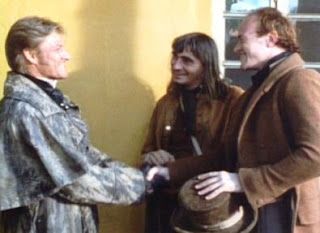 If you don’t have the complete edition, is available individually or in a collector’s set with previous episodes Revenge and Justice. I’ve said it before, but the three together may be some of Sharpe’s finest. You can forgive the original retrospective of Justice when it’s taken with this hurrah. Of course, I would have loved to see some behind the scenes material or reflections from the cast and crew beyond the compilation Sharpe The Legend. I wasn’t that into Sharpe when it was first on television. I was reading Hornblower at the time, so it’s strange that Sharpe ended, ITV began producing Hornblower, and now they refuse to make more Hornblower and have returned to Sharpe with Challenge, released in 2006 and Peril, coming this fall. As beautiful a conclusion was, I wonder why they stopped making shows in 97? Why not go on? There’s more material from Cornwell still to be had. 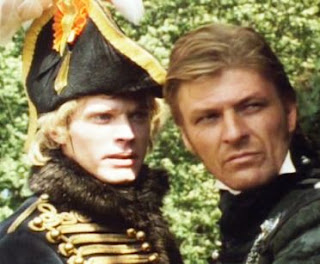 Whether it was Bean’s choice or a production decision to conclude, everyone involved in is up to the task of the finale. Oft underrated, Sean Bean has perhaps never been better. The entire cast seems bittersweet, from the in jokes between Sharpe and Harper to the last hurrah of Hagman and Harris. Everyone has his shining moment and some get their just due, ahem Jane. Paul Bettany is delicious as the corrupt Prince of Orange, and the banter between Bettany and Bean is delightful, just the right level between the carnage of . It took Sharpe’s production team about ten episodes to nail its own value and style, but the theater here is the best battle shown in Sharpe. I can’t recall viewing another recreation of that’s better. We’ve got our regular Sharpe music of course, but again the crew has found battle worthy compositions to accompany the lofty visuals.

Unfortunately there is one downside to . You can’t just pop in the video any time you wish. Alone, it’s a fine television production, sure, but can only be fully appreciated with the previous thirteen episodes behind it. If you haven’t started watching Sharpe yet, what are you waiting for? 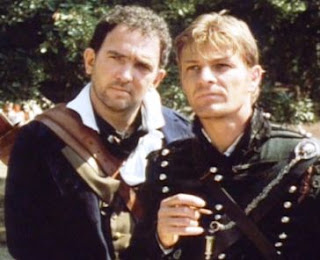 Posted by Kristin Battestella at 1:11 AM