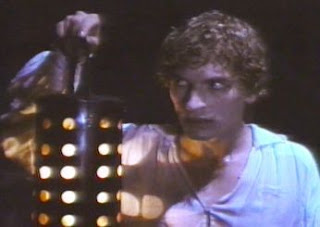 Kinky and Weird Gothic Not For Everyone

Sometimes I wonder if stars Gabriel Byrne, Julian Sands, and Natasha Richardson are embarrassed by Ken Russell’s 1986 horror romp Gothic. I like its sexual and psychological horror blurs between dreams and reality, but I picked up the DVD at the Dollar Store, so maybe that says something?

Young couple Percy (Julian Sands) and Mary Shelley (Natasha Richardson) travel with Mary’s half sister Claire (Miriam Cyr) to Lord Byron’s (Gabriel Byrne) estate outside . The stormy lair is full of dark shadows and sexual fun for the uptight Shelleys, and one night with Lord Byron leads them to discover their worst fears and desires-inspirations that lead to the creation of Mary Shelley’s Frankenstein. There are talented people onscreen and off, but Gothic leaves some acting to be desired. The debut script from Stephen Volk (Afterlife) gives little beyond psychological double talk for the boys and screams for the ladies. Although the principal trio has gone on to further acclaim-obviously Gabriel Burns’ classic turn in The Usual Suspects- they’re all young and unhoned here. Gothic’s performances and dialogue also suffer from an overuse of what I can only describe as ‘Britishness’. Ken Russell (Tommy) is know for his offbeat style, and his eccentric direction may have been a detriment to the mostly British cast- their accents seem fake and tongue in cheek. Folks who don’t like the over the top style will quickly tune out. Just because it takes place in the 19th century doesn’t mean you have to double up on the uppity Brit sounds. I don’t mind this low budget eighties English style, it’s good for an MST3K, but sometimes I wish Gothic could have been a serious look at Mary Shelley and her real life inspirations.

Britishness, does however, serve Gothic well in set and costume design. It’s amusing to see the same house Russell would later use in Lady Chatterley; Instead of a foreboding loveless mansion, here Russell plays up the stormy nights and haunted house nooks and crannies. Regency costumes also add to the horror flavor. The costumes are little more than wispy nightgowns thrusting out all the ladies’ bosoms. It’s a creepy subtle touch about how close sex and horror can be. You know one of two things are going to happen to that bosom: Sex or stabbing. 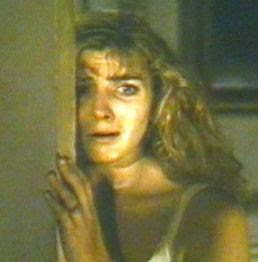 But of course, there is a bit of sex in Gothic. Although it’s mostly heavy petting and nothing hardcore, this one isn’t for kids or old ladies. Gothic’s triumph is in its look at fear and desire. It’s too campy for the audience to be scared, but the kinky connections between adrenaline and fright make this a fine film to watch alone at night. Why do frightening images turn us on? How could Lord Byron with his traditionally unattractive clubbed foot be the facilitator of people’s desire? Why do some people enjoy pain-upon themselves and upon others? Once you get past some of the really weird imagery in Gothic, the finale gives us an ambiguous confrontation that actually has us coming away with thought.

Yes it’s weird, eighties styled, and a very British period piece, but Gothic is a naughty and philosophical look at what scares us and turns us on. It’s the perfect late night Halloween camp. Not bad for a dollar! 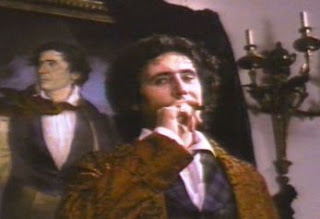 I have never seen this one, though I will say that I am going to have to find a dollar store in my area! :-)

Thanks for stopping by, Bone!