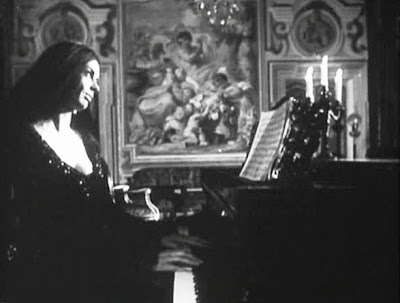 Sigh, the fifties and sixties. Those supposedly so glorious decades and Leave It to Beaver archetypes are rampant with creepers, horrors, scares, and suspense and oh yes, I can’t get enough of ‘em! If nothing else, the treats here give us a chance to celebrate mod goth gal and recent birthday girl Barbara Steele!

Chamber of Horrors – Disclaimers warning of the “Fear Flasher” and “Horror Horn” and a very creepy period wedding with, er, well, necrophilia open this 1966 conundrum. Though originally envisaged as a television production or pilot project, the top quality designs, costumes, and late Victorian style are indeed cinema worthy. Wilfrid Hyde-White (My Fair Lady) is proper English fun, and this actually might have been nice as a series of creepy crimes and wax whodunits. Granted, the House of Wax museum and revenge themes are a bit too familiar; possibly even deliberately Vincent Price knockoff-ish. The original spin of having the proprietors of said museum also being amateur sleuths feels like its reaching, and yet these elements are enjoyable enough to forgive all that. Despite a slow start and more mystery than the promised scary, the over the top support is a treat, too. Unfortunately, the pace and scope can’t quite make up their mind. Considering the aforementioned marital naughty and brothel shenanigans, the juicy is fairly tame. It takes 45 minutes to get to the heavies deserving of that opening warning, and there’s a nagging small mindedness trapping all the fun. The intelligence for a twisted, involved series is there, but the big horror movie crazies are not. If the viewer accepts the behind the scenes struggle and let’s this remain a stylized but campy TV delight, one can really have a good time with the romp here. 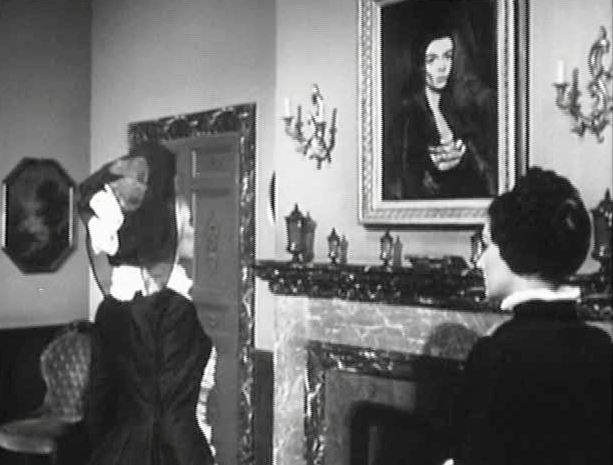 Nightmare Castle – Spooky piano music, lookalike motifs, gothic décor, black and white mood, and lovely costumes make this 1965 Italian horror film sweet. Not to mention Barbara Steele (Black Sunday) is a real treat, too- along with raunchy greenhouse affairs, juicy whippings, naughty dialogue, and vengeful torture. Paul Muller (Count Dracula) is a bit of a Poor Man’s Cushing, but he has some nice inheritance twists and mad scientist diabolicals. Are there ghosts? Who’s going mad? Will deviant science receive its just rewards? Creepy heartbeats, camera tricks, scary sounds, screams, and haunting dream sequence effects are superb against the crisscrossing vengeance, innocence, corruption, and scares. Some may dislike the dubbing and/or subtitles, granted. The hunt and chase for the various video editions or quality prints is made more difficult thanks to numerous international titles and assorted running times. Is the pursuit worth the effort? Yes.

Terror Creatures from the Grave – Why not have another 1965 Italian delectable with horror queen Barbara Steele?  The very loose “inspired by” Poe ties are reaching here, but perhaps there is an intentional coffin-esque pattern in the black and white, small-scale Victorian design and frantic, claustrophobic camerawork. Visually, this is actually quite nice looking, with unique camera frames and carefully staged snapshots from scene to scene. The plague back-story is spooky and foreboding to start, but some scenes are stilted thanks to an awkward narration, lack of action, and slow, uneven pacing.  Until now, I also didn’t realize so many horror movies begin with driving and highway montages – even period ones! The ladies’ costumes are somewhat hoochie before historical, too. Thankfully, the early roadsters are sweet and crazy thunderstorms, creepy gals, and fearful servants add heaps of atmosphere. A few good scares jump out as well, and the music and early gadgets are perfectly macabre. Thanks to some of the plodding pace and poor print quality, this probably won’t be fun for today’s CGI obsessed. However, fans of the cast and moody noir horror audiences will enjoy the intriguing hint of gothic romance, undead murder mystery, and vengeful ghost story found here. 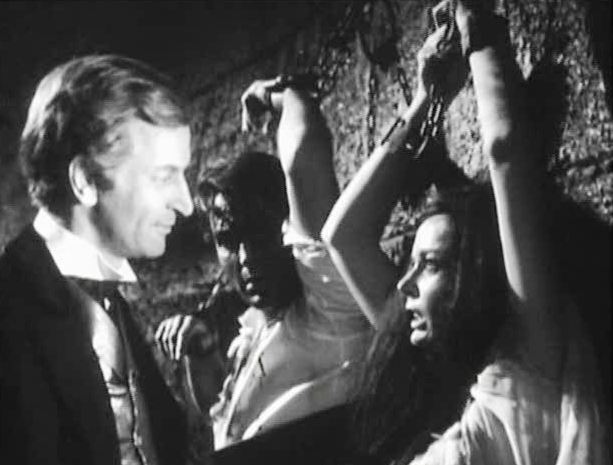 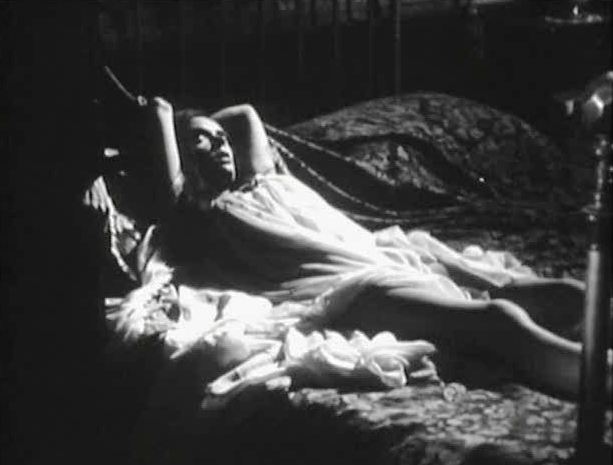 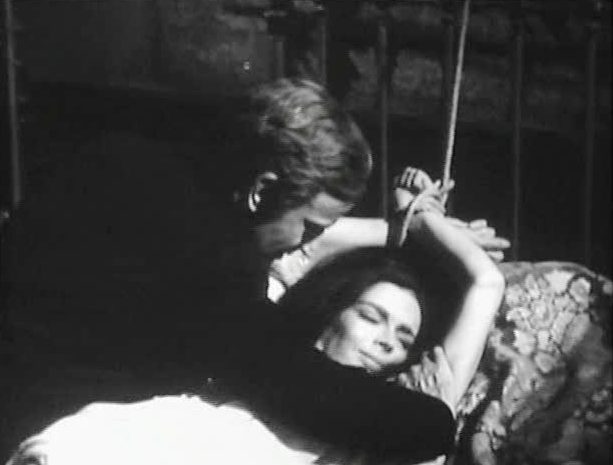 The Crawling Eye – The true The Trollenberg Terror title actually seems like a better name for this 1958 SF gone awry tale, as highlighting the eponymous monster effect isn’t really a very good idea. Thankfully, climbing terrors, ropes fraying, men falling and natural fears of snow, cold, and mountains keep the pace interesting. Toss in a weird psychic chick (Janet Munro, the boy who’s a girl in Swiss Family Robinson), past radiation iffy, missing mountaineers, and local superstitions and you get plenty of peril.  Great pulsing, heavy music and nice scares and violence increase as the suspicions and conspiracies get crazy. Unfortunately, the familiar premise would have been more interesting if not for the seriously hokey science equipment and faulty logic. The tone is too stuffy and British dry, and the mountain photography and poor backdrop designs are kind of, well, strange. All that might be a cult horror fan’s low budget or dated charm, granted. However, it is dang tough to tell who is who, and the deadly moving mists and that titular eye are too laughable for most viewers to take seriously, which hampers a lot of the campy fun. 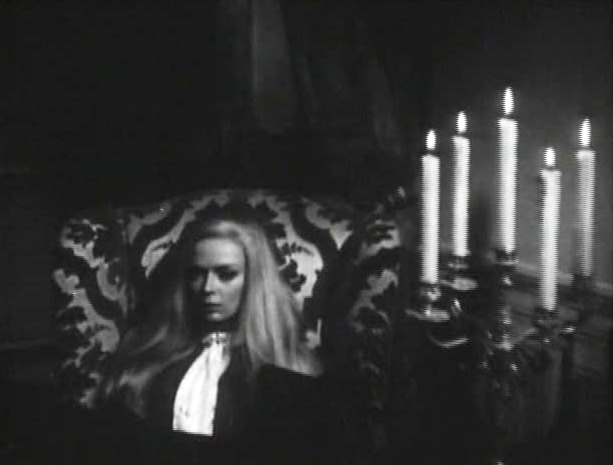 Bride of the Gorilla – Animals talking to Perry Mason in some sort of Tarzan gone bad? This black and white 65 minutes from 1951 co-starring Lon Chaney Jr. (The Wolf Man) and Barbara Payton (Kiss Tomorrow Goodbye) should be more scandalous and saucy than it is. There’s fun wildlife photography to match the hot temperatures and steamy, scorned woman subtext, and the décor is an eclectic mix of Old World fifties and South American motifs. Unfortunately, the over the top fifties narration, typical music, and slow, dry rhythm are only part of the problem here. After all these years as the aforementioned television detective, it is simply too tough to believe Raymond Burr as an angry, hard up, villainous Latino. The entire cast is wasted thanks to the bland pace, and poor Lon Chaney has some really dumb stuff to deliver! Complete with a corny spell casting old lady cliché firmly in place, what starts out as a normal fifties drama somehow ends up with an unseen pseudo gorilla instead of a dry love triangle. As if it weren’t already going downhill, the veiled monster elements are too tacked on to care. If one likes watching the campy, tumultuous fun of train wrecks, perhaps one could find something here. Sadly, I think this one may even be painful for fans of the cast to watch. 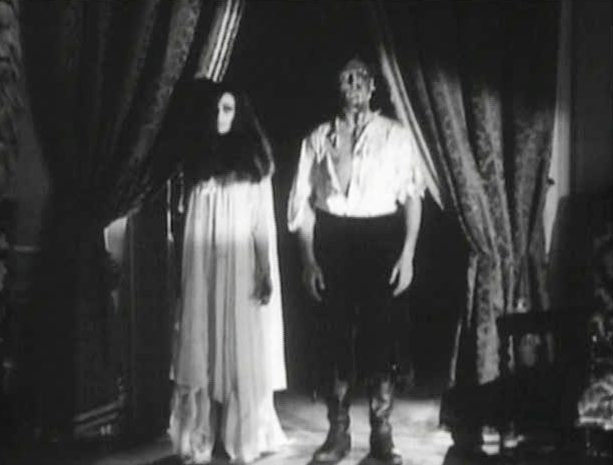 Posted by Kristin Battestella at 4:09 AM