Sixties and Seventies Vampires, Oh My!

Yes, unbelievable as it is among all our recent undead teenage angst, vampires have really been around for a long time.  Now that Twilight has finally come to an end, newly grown up bloodsucker fans and old-school vamp obsessives alike can revisit these campy, sexy, mid-century ghouls or open the juicy retro coffin anew. 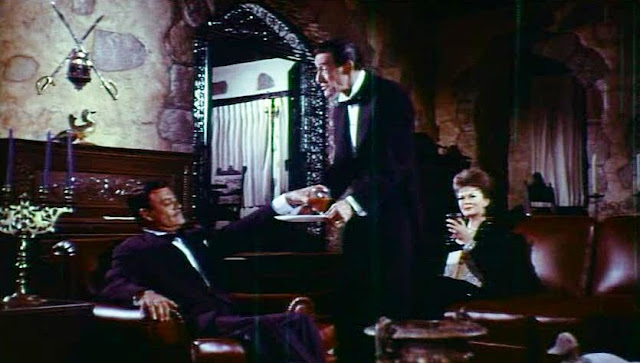 Blood of Dracula's Castle – Oh yes, John Carradine’s (Bluebeard) a butler serving Double O Positive Blood in this 1969 vampfest from director Al Adamson (Dracula vs. Frankenstein). Swanky sixties tunes, hot rod cool cars, ironically sunshiny photography, and sweet fashions à la mode all create a mid century meets medieval feeling along with the gothic screams, dark forests, great candles, and charming castles. Thanks to a resident werewolf, human sacrifice, and an outdoor chase or two, the pace keeps up with the flashy mod vamps and sardonic wit onscreen.  However, there is surprisingly little blood considering the title – our aforementioned cupbearer and his nobles’ refined sensibilities for new…vintage as they say notwithstanding! Unfortunately, the low budget video releases also carry some strange green lines and print damage. Unless you think the innate film flaws add to the creepy character and stylized atmosphere, this one is really in need of a proper digital restoration. It’s also weird that all the titular mayhem is taking place in a castle in the middle of Death Valley, USA, but you have to go with the kitschy.  This is not high art, but dungeon secrets, fun scares, short shorts, and bullet bra bikinis keep this hour and a half entertaining. 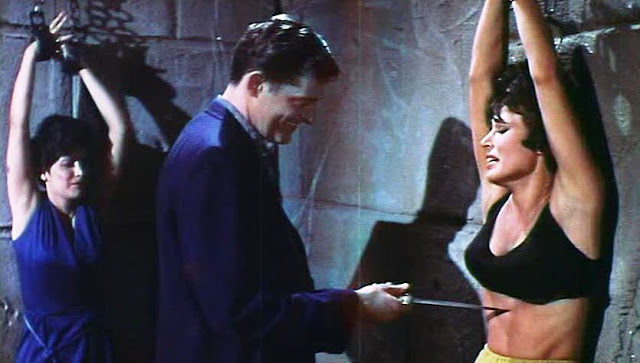 The Bloody Vampire – The English version of this black and white 1962 Mexican import El Vampire Sangriento opens with eerie slow motion, silent carriages, tolling bells, howling wolves, and creepy forests to set the macabre mood. The candles, Old World Feeling, secret crypts, great architecture, and period costumes counter the almost comically out of place and unmatched dubbing, but there are some eerie good effects, thankfully. Fun Bats, zooms, and coffins mask the fact that once again, there isn’t much of the titular blood. However, the religious arias are a bit out of place and too reverent for the subject. Likewise, some of the sound effects are more fifties UFOs than scary. Fortunately, a few corsets and kinky bedroom threats accent the household violence, vampy bitch slaps, and whips. Although, I’ve never heard a vampire tell his victim/bride to put some clothes on before! It might have been neat to see a South American set tale rather than the standard Eastern European mold, but the English translations add to the gothic horror homage. Count Frankenhausen has a maid named Hildegard “The servants must call me Frau” and a daughter Bronehilda at his cave the “Haunted Hacienda.” Yes, and did I mention that “Vampirina” is the blood of a vampire? The English track is tough to hear, and it’s all back and forth wooden exposition on deadly flower roots, grave robbings, early autopsies, science versus death, vampire mythos, and secret vampire hunting family histories. It might be a dry translation or stilted from the innate Espanol, but at least this isn’t in the over the top telenovela styling we expect today. The pace does pick up for the last half hour, and once you’re past the niche logistics and morbid humor, then this is a good little hour and a half. 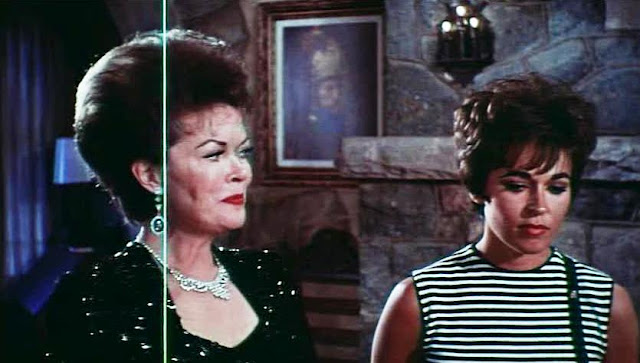 Crypt of the Living Dead – There’s isn’t a lot of information available on this black and white 1973 tale also known by the wonderfully bad title Hannah, Queen of the Vampires.  Andrew Prine (V) looks so young and the architecture and medieval religious designs are well done, yes. But sadly, the drab, colorless photography hampers the fun, gothic atmosphere. Was this later day black and white filming done by production plan or necessity? The editing is also either very poor or there has been some unfortunate film damage, and the plot is a little slow and silent to start, with too many setups and tough to hear dialogue when we do have it. The nighttime action is almost impossible to see as well, and the frantic camerawork and extreme close ups make what should be straightforward scares somewhat confusing. All this production doom and gloom and yet the script and cast actually aren’t that bad. The music and eerie effects are sinister enough, and there’s a historical spin on the then-contemporary skepticism and ethical debates. Die-hard vamp fans looking to have a fun nighttime viewing will enjoy this. However, the finale is a bit overlong and repetitive for horror lay folk, and those low budget values will hinder the natural fears and good scares for today’s more visually treated audiences. 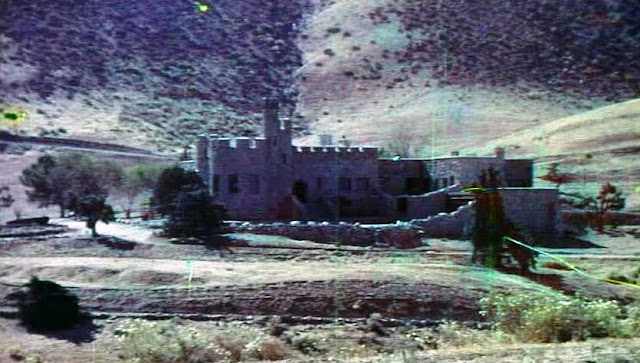 (It's a castle...in the desert!)
The Vampire Happening – Freddie Francis (The Evil of Frankenstein) directs Pia Degermark (Elvira Madigan) in this 1971 German undead and fleshy romp accented by tongue in cheek scares, jazzy porno music, and incredibly bemusing imagery. From the bug-eye-glasses wearing folks on an airplane watching saucy movies like “Transylvania 1971” to the heady gothic castle where all the nudity and sexy torture goes down, this is how horror comedy should be done. The spooky atmosphere and eerie environments are excellent; the sexy players and fun plot don’t take themselves so seriously. It’s a given that the English dub is bad – though the dialogue is great when you hear it. Some of the zooms and filming angles are weird, sure, and I wish the video print were restored with just a bit more polish. However, the rest of the creepy sound mixing, dreamy effects, and boobaciousness are just fine. The audience for this type of film is almost certainly very niche – we’re beyond Once Bitten but not on the same level as Porky’s. Nevertheless, if anyone twisted and humorous enough is ever seeking a lighthearted bachelor party film near Halloween, this might be the picture. Could a straightforward and sophisticated telling of the story have been any good? Probably. There is a decent but juicy and period morality undercurrent here, but why go with the flow? Although I don’t suspect anyone today can pull it off, I’d actually love to see a retro remake! 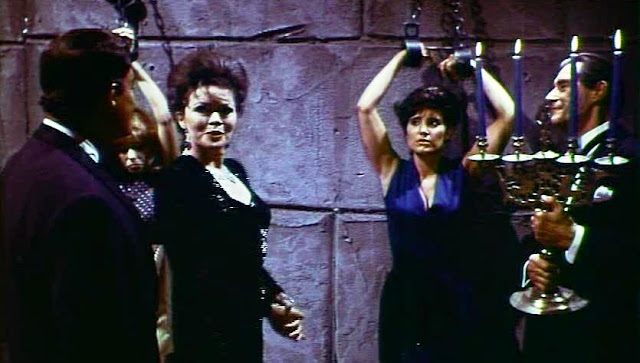 The Vampire's Night Orgy – Spanish director Leon Klimovsky (The Dracula Saga) uses an unusual wide screen format for this hour and twenty minutes from 1974. The color is very washed out, too, and unfortunately, the picture is often too dark or tough to see. Like most of the foreign or obscure horror of this era, there’s edited versions and lost prints, and some scenes are regrettably dated and look the likes of seventies porn. Thankfully, those are about the only problems here.  Crazy funerals, wild music, and a nutty countess add to the demented ambiance of ticking clocks, creaking doors, and spooky sound effects. The dubbing is actually in sync and performed well, too, with a few words of un-translated Spanish adding to the Euro flavor. From the interesting premise – an en route house staff’s bus breaks down in an seemingly abandoned town that really has an all too generous blood drinking population – to a bit of kink, nudity, and cannibalism, the screams and foreboding build up are solid. Sure, most of the men look the same with huge mustaches and I’ll be damn, there isn’t a lot of blood to be seen. However, the child actors aren’t annoying, and the vampire violence is well played. One by one, victims are taken down in fast, almost gang rape terror, and the chase finale and twist ending earn top marks. Though in serious need of a restoration and some may have trouble getting past the dated look, this is a nice little scary movie. 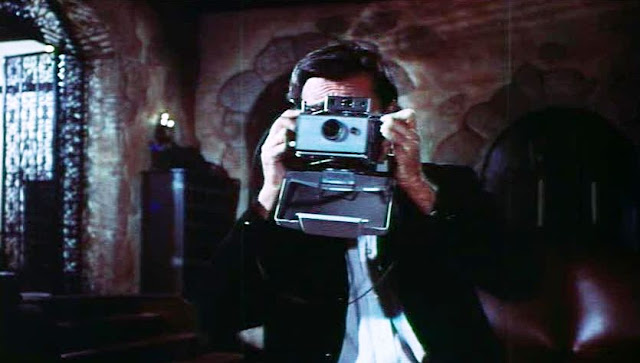 Posted by Kristin Battestella at 3:08 AM