Where are all the Mid-Century Mexican Horror Films?

Where Are All the Mid-Century Mexican Horror Films?

From The Witch's Mirror to The Curse of the Crying Woman and more, I've thoroughly enjoyed the mid-century Mexican horror productions I've seen from the forties, fifties, and sixties. I would wholeheartedly like to see more, but where did all these Mexican horror movies go? Read on for my rant about the frustrating difficulty in finding these quality classic scares.

Thanks to directors such as Rafael Baledón or the likes of Abel Salazar's filmography, one can filter, search, and find dozens of Mexican horror films on IMDb, Wikipedia, and more. We know they exist, so where are they and why aren't they readily available? Ten or fifteen years ago, a budget DVD set with twenty or fifty so-called horror classics was a get what you pay for way to find a few old horror gems amid the so bad it's good obscure, public domain scares, and cheap VHS quality rips. This was how I first found some Spanish horror delectables. Today however, those sets aren't really viable compared to affordable streaming options. Unfortunately, be it the free horror channels, discount streaming tiers, or the big mainstream options, none of them have any of these films. Back when we had Xfinity and could browse all the thousand channels on the guide including the Spanish cable package, I used to see some great horror films listed on the peliculas de clasicos channels. I'd write down great titles like Museo de Horror, El Beso de Ultratrumbo, La Cabeza Viviente, and more but can't find any of them anywhere. How with today's instant access to everything are these films still so inaccessible?

Cultural Drift is No Excuse!

It takes a lot of digging and research to find these titles, and although it's easy to search with Spanish language filters, that creates its own set of problems. Sure I've been able to find a few Salazar sixties horrors or Mexican movies, but those searches also yield a lot of Paul Naschy pictures from Spain (and searching for his Waldermar werewolf films is another aggravating not all available pursuit). Soon, these lists skew to Spain, European productions, Jesus Franco, Dario Argento, and Mario Bava. Seventies Italian giallo pictures are not what we're looking for, and finding the right version of a film with different releases, run times, and different titles per country only adds more fuel to the frustrating fuego. Sometimes you think you are getting the right movie and it turns out to be something else, or worse a film you've already seen under a different name. I myself am guilty of putting all my Spanish horror viewing lists and recommendations together because it's so tough to find just the Mexican scares. Of course, Spain and Mexico are different cultures with different español and different identities, and it's problematic to presume they are interchangeable. Many years ago I had a vehement argument on an online film forum when a commenter said he wanted a role to be cast with Penélope Cruz or Salma Hayek or “one of those types.” O_o This person could not see why I objected to these actresses being lumped together as one and the same. On a non-horror note, I highly suggest the Maya Exploration Center's Professor Edwin Barnhart's Great Course lectures including Ancient Civilizations of North America, Ancient Mesoamerica Revealed, Lost Worlds of South America, and Exploring the Mayan World to educate oneself on the history of Southwest, Central, and South American communities.

The Classics are Better.

What irritates me most is the perception that because Hollywood or mainstream horror is more prevalent, that means it must be better. In my recent viewings, however, that's been far from the truth. I've enjoyed the majority of independent Australian, New Zealand, Irish, UK horror, and European productions, sure. Canadian pictures, on the other hand, have been more mixed bag. When the festival finds are true to themselves, they've been good – but you can tell the difference when a north of the border production is compromising itself in hopes of an American sale and wide distribution, catering to the formulaic and cliché. I had such high hopes for The Curseof La Llorona. It starts well with colonial Mexican scares so viewers think we're in for some period piece Hammer flair, but sadly the film – written and directed by white men, because of course – degrades into the typical kids in peril with whoosing entities and trite jump scares. Cultural fears are dismissed and protective warnings are treated like Mysticism 101, and the entire time I was waiting for it to end, I had one thought, which was that The Curse of the Crying Woman was better. There's an entire Wikipedia page called “Golden Age of Mexican Cinema” but where are all the films? Netflix if you're lucky has one DVD copy, and when that breaks, it's just saves and unavailables.

It's Frustrating and Offensive.

For viewer looking for quality horror of any kind, it's disturbing how unique storytelling, different cultural scares, and the many horror stories to be told must be bent to serve white mainstream horror. The fact that these films are not widely available almost feels like an intentional burying – the way a great Asian horror film won't see the light of day stateside because the rights were bought up and it is being deliberately suppressed until the rich white blonde jump scare cliché remake is released first. Why aren't these classic, quality films being celebrated? Why are they not freely available to watch at any time? A black and white picture? So what! Spanish subtitles or a bad English dub? Big deal! Is it because they are not in English that white America suspects releasing these films properly won't be profitable enough for them? Well that's just too damn bad because I want to see these films. Do you have an inside source on where to find some classic mid-century Mexican horror movies? ¡Damelo! 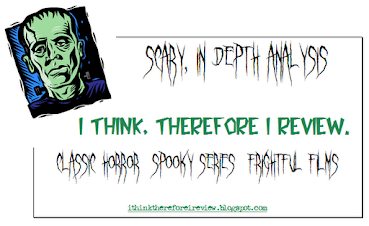 Posted by Kristin Battestella at 2:22 PM