My first Andy Gibb review, of his first album, from a record, of which this is my first review! Did that make sense? 1977’s Flowing Rivers is my favorite Andy album, and in my opinion his best. He looks the hottest on this cover, too! Unfortunately, in hindsight we can see Andy started at the top, and for awhile he kept it up, but eventually the high life brought him down.
Flowing Rivers begins with the smash hit I Just Want To Be Your Everything. How can anybody not like I Just Want To Be Your Everything? I liked Everything even as a kid. My Dad couldn’t understand how I liked Andy Gibb but not The Bee Gees. “They’re the same thing!” Honestly now, we must admit the vocals on Everything are a bit ‘Barryfied‘, but that’s why it sounds so good.

To me the rest of the album is much more true to Andy himself. Unlike his later work, which became more and more Barry, with Andy writing less of the material. Andy by himself wrote eight of the ten songs presented here. Words and Music starts off slow, and actually sounds rather weak early, but it picks up steam with each turn of the lovelorn lyrics. Andy also adlibs with a touch of falsetto at the end. His falsetto-not the Barry imitation-is very sweet and true.

Dance To The Light Of The Morning is a cute country song that would get the gang at the pub up for a dance. Andy’s vocal arrangements are perfectly placed and have a sing a long-ability. Maybe this is the tweaking of producers Barry, Albhy Galuten, and Karl Richardson, but it sounds dang cool.
Too Many Looks In Your Eyes and Starlight are the first slow tunes presented. Andy’s songs have such a sweet romantic flare. It can seem idealistic at times, but it also has a feel of innocence or ‘young love’. Side One ends with you totally relaxed and feeling those special feelings. 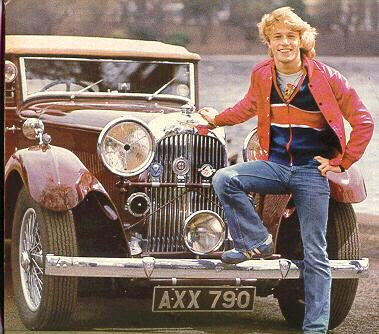 The B-side of the record begins with the second Barry orchestrated hit Love is Thicker Than Water. Written by Barry and Andy, Andy’s voice seems more breathy natural here-less like the Barry imitation on I Just Want To Be Your Everything. I love the humming and instrumental breather at the end. (Actually this song sounds kind of scratchy on my record. I guess the previous owner played this song a lot.) The title song Flowing Rivers returns to Andy’s country feel. This one plays more like a page of a road trip journal, chronicling the highs and lows of life, fame, and the road. It’s up and down rhythm parallels this perfectly. It’s quite catchy.

Come Home For The Winter is even more country. The country styles themselves are completely different, however, and I am left to ponder what would have happened had Andy explored these country singer songwriter poetic styles further. Andy’s later duets with Olivia Newton-John are nice, but seemed forced somehow. These are easy tunes you’d expect to hear at someone’s barbecue. I like Andy this way.

Let it Be Me sounds like that Everly Brothers title. Forget that! Andy’s song here is like a cross between country and disco. No lie, square dances and disco balls do go together! And this song is good. Fittingly, In The End slows the album to a close. Andy’s lyrics of saying he tried his best are fitting but eerie. Flowing Rivers opens and closes with very strong songs from Andy, begging the question: What could be next?

Those who think of Andy Gibb as nothing more than a Bee Gee imitator will be pleasantly surprised at this listen. The similarities are evident, but these songs are worthy of the Gibb Catalog in their own right. Flowing Rivers is a very poetic and honest country album that proves Andy had the Gibby Talent to do whatever he wanted to do.
Posted by Kristin Battestella at 2:58 AM