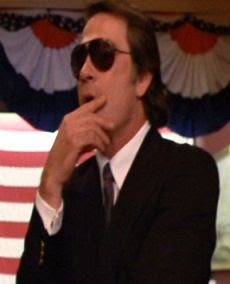 
I’ve had other actor obsessions before my current Sharpe and Sean Bean tangent-just so you know. Sometimes I like an actor for his looks, but he’s got to have charm, talent, and charisma, too. That is why I also love Tommy Lee Jones. When I discovered the 1988 neo noir Stormy Monday boasted both Jones and Bean, well, you can guess how long it took me to make that purchasing decision. 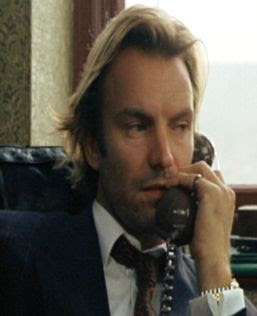 Call girl Kate (Melanie Griffith) is trying to get out from under the thumb of corrupt businessman Cosmo (Tommy Lee Jones). Kate’s been waiting tables, hoping to leave New Castle, England and return home to Minnesota. Unfortunately Cosmo arrives for ‘America Week’, hoping to buy out club owner Finney (Sting) along with other strategic business and political maneuvers. Finney’s everyman Brendan (Sean Bean) meets Kate accidentally and the two become romantically involved, unaware of the plot brewing around them until it’s too late.


I have to say right away that my dad hated Stormy Monday. He claims it’s the weakest film in which he’s seen any of the four leads. If you don’t like atmospheric neo noir films, Michael Figgis’ 1986 moody Monday is not for you. Nowadays I think audiences favor fast paced mystery-suspense thrillers; unlike sixty years ago, where quiet, deliberate noirs slowly built to twists a la Laura or The Maltese Falcon. While its brewing story and blues music have an audience, I can see how not everyone would like Stormy Monday. Dare I say its style is too European for us me me me Americans? Perhaps. 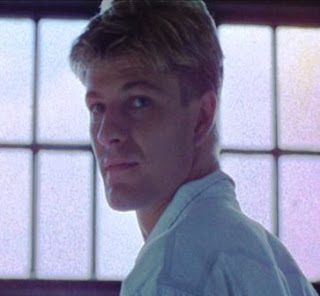 Thankfully we do indeed have a fine cast in Stormy Monday. In only his second major film, the very young, very blonde, sans tattoos, and be-earringed Sean Bean holds his own against some serious performers. Purely on an indulgent scale, that must have been some choice to make back in the day between Sean Bean and the equally young and pretty pouting Sting. We meet Brendan as a down and out baby faced musician, but he’s quickly drawn into this crooked New Castle underground along with Kate. Melanie Griffith also starts out bright eyed and busy tailed, or at least hopeful, but her despair over her inescapable fate takes over despite her romance. Griffith’s part is also a bit depressing. I can see her need to vary material, but after the light hearted Working Girl, folks might be turned off by Griffith’s dark turn here. The timing of the two films, however, was critical in boosting the cast and crew to new fame. Bean and Griffith make a cute on screen couple, but also an odd one. Some of their scenes are fine and steamy, but in others, Griffith looks far too old for Bean. He’s yet to become his rugged and villainous self, remember.

Of course, Tommy Lee Jones is his wicked self ala Under Siege. We don’t get as much of him as I might have liked, but Jones’ presence alone raises the level of every scene he’s in. We know the situation is dangerous because Tommy Lee Jones says so. We know Cosmo can do whatever he wants and always has his way. This of course, can’t bode well for Sting’s Finney. Maybe Sting has never fully made it on screen as an actor’s actor, but even today his one named star power is a given. Instead of trying to stretch his actor chops like Dune or The Bride, Sting plays the owner of a jazz club who has babes and occasionally plays bass. But of course, it will be Finney who gets his way, right? Jones and Sting play a fine cat and mouse game while Bean and Griffith inadvertently interfere. Who has the upper hand? Who is really the star of the film? You aren’t always sure. 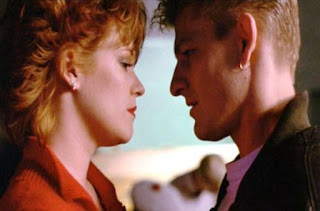 Stormy Monday involves a secondary, largely musical and humorous plot involving the real life Krakow Jazz Ensemble. Some of their music is good, some of it is so bad it’s funny, and some of it is just plain bad. It’s not all meant to be easily listening, but you must like blues or jazz to enjoy Stormy Monday. The on location production looks very eighties and very poor, but the music, mood, and ambiance are very rich. It’s strange that some of America’s trends and pop culture comes from the UK, but the country’s film production seems so low budget and ill defined compared to Hollywood. The film’s ‘America Week’ theme has eighties connotations and relations on screen and off. 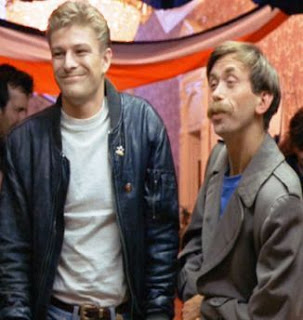 Thankfully, the music touches everybody the same way. All the music onscreen has a source, whether its being played in clubs, through the juke box, or because everybody is listening to the same radio station. Director and writer Figgis ingeniously unifies the entire film through song. Naturally those that like Stormy Monday can see it as the precursor to future fine work from Michael Figgis. Leaving Las Vegas, anyone?


My DVD was very affordable at under $10, but it has little features beyond trailers and weak menus. The story by Figgis is perhaps a routine one, but the atmosphere and music, along with fine lead performances and chemistry, make Stormy Monday a must for any fan of the cast. A small indulgence for you this Valentine’s Day.
Posted by Kristin Battestella at 12:05 AM