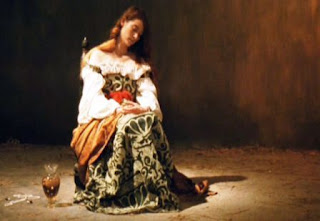 Like most Italians, I’ve always known of Caravaggio and his paintings. Like most Sean Bean fans, I was very happy when the 1986 film Caravaggio came out on DVD last year. It’s weird, hot and bothered, full of layers inside and out. It may not be for everyone, but Caravaggio is an art house lover’s dream.

Young painter with promise Caravaggio (Dexter Fletcher, Nigel Terry) mixes business with pleasure as he sells himself and his art on the street. Eventually he’s taken in by the church and paints religious masterpieces, all the while living a very heady and underground lifestyle. The beautiful (Tilda Swinton) and street fighter Ranuccio (Sean Bean) model for some of Caravaggio’s paintings, but their twisted love triangle cannot last.

When I think of Caravaggio, firstly I think of the incredible canvases onscreen. Director Derek Jarman (War Requiem, Jubilee) has recreated Caravaggio’s paintings in painstaking detail. The highlights of the film are the sequences showing Caravaggio painting his masterpieces from posing models. These scenes are lit perfectly and saturated with vivid colors. It’s as if the art itself was on the screen. American audiences may not take to this quiet, still life look and feel, but you can’t deny the breathtaking living art in Caravaggio. 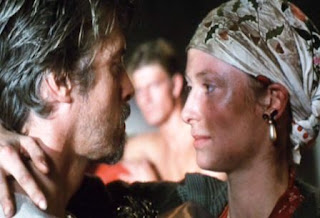 On the other had, this is one very weird and out there movie! The loud and maniacal sequences are too dizzying and border on the senseless at worst and seem out of place amid the film’s silently beautiful scenes at best. Viewers can take their pick on production values-either considering them extremely poor and low budget or intentionally sporadic and sparse. Why couldn’t Jarman make a straight, period piece costume drama detailing the life of Caravaggio? Regardless of the film’s finances, Jarman chose to make Caravaggio the way he did. Yes, a lot of it is incredibly weird and too over the top, but parts of the movie are also a lot of fun. The intentional anachronisms in Caravaggio add much needed humor and a light air to the film. Typewriters, motorcycles, and calculators add some fun class to this abstract time and place. These pieces also add commentary and statements without words, much as a painting would. Obsessive muckrakers clicking away on typewriters and priests chachinging on their silver calculators-these subtlies say more than exposition ever could. 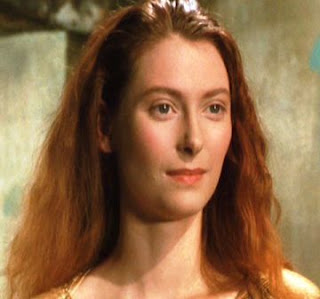 Despite its lovely look and bizarre feel, the cast of Caravaggio is what makes the movie. Nigel Terry (Excalibur) is fittingly weird and heady as the adult Caravaggio. He is perfect as the X factor and catalyst between and Ranuccio. Its no surprise that this trio worked with Jarman again in 1989’s War Requiem. Although neither is the star and I wish both were onscreen even more than they are, the film debuts of Tilda Swinton (Michael Clayton, The Chronicles of Narnia) and Sean Bean (Sharpe, The Lord of the Rings) put the icing on Caravaggio’s cake. Swinton is both ugly and gorgeous as the jealous and power obsessed . She starts out dirty, ugly, and boyish, but ends up lush, gorgeous, and tragic. Swinton doesn’t say much here, but her onscreen presence is undeniable. Her chemistry with the very young and beautiful Sean Bean is also exquisite. 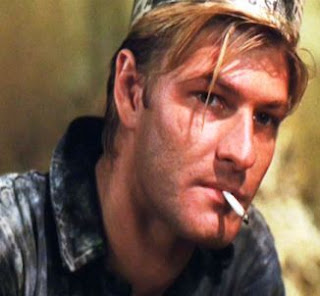 Sure, I like Sean Bean, but you can’t often call his villainous performances or rough heroes beautiful. In Caravaggio, however, Bean’s Ranuccio is hot, aggressive, statuesque- but severely flawed at the same time. It is no wonder Caravaggio falls prey and preys upon these two misguided young lovers. The cast and the silent symbolism of power and wealth make the film-particularly during one lovely modeling scene between Bean and Terry and the subsequent hammock scene between Swinton and Bean. Yowza!

Naturally, it is easy to see the parallels between director Derek Jarman and his onscreen Caravaggio here. Yes, there’s a lot of subtext and statements both veiled and exposed, but there’s so much more to this film than speculation about Jarman’s controversial life and style. I myself am not a big fan of directors or writers knocking on audiences’ heads with obvious statements and commentary. Thankfully, Caravaggio can be enjoyed for its weird and beautiful style onscreen without any heavy handedness from Jarman. If you’re looking for it, you’ll find it, but you don’t have to adore Jarman to appreciate the vision here. Some of that vision is, in a way, coming from the titular sixteenth century Italian painter himself. His paintings and style dominate the screen- adding to his art and genius and his bittersweet life.

The DVD presentation mirrors the portrait-esque style of Caravaggio with interactive, moving menus. The subtitles are essential in picking up the film’s soft dialogue. There are plenty of interviews and commentary, conceptual art, storyboards, trailers, and galleries to immerse the viewer with Jarman and Caravaggio himself. My DVD also came with a lovely write about the film. 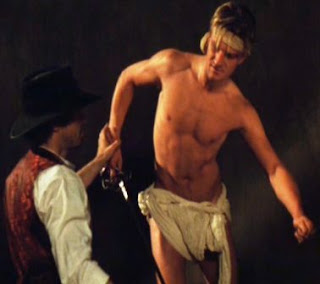 I think it goes without saying that not every is going to like Caravaggio. Although there is nothing extremely overt, prudes or anti art house folks should avoid anything by Derek Jarman. If you have a problem with homoeroticism or anti Catholicism on film, you should also skip Caravaggio. That being said, fans of the titular painter and Jarman’s work probably already adore this film. Bean and Swinton fans should tune in as well. Some of its bad, some of its good-and some of it you may not fully get the first time around, but Caravaggio is a beautiful film with a talented cast. Take a chance on this gem today.

Posted by Kristin Battestella at 11:19 PM