More Classic Horror, What Else Can I Say?
By Kristin Battestella
I can’t help myself; I’ve been reliving the undead scary spooky greats of yesteryear!
The Brides of Dracula – Peter Cushing returns- without the titular Big D- for this 1960 Hammer sequel directed by Terence Fisher (also of the precursor Horror of Dracula).  Here the once again young, suave, taking names and staking dames Van Helsing puts the cross to Yvonne Monlaur (Circus of Horrors), Martita Hunt (Great Expectations, Anastasia) and Andree Melly (The Belles of St. Trinian’s).  Though the Hammer sets are a little familiar, naturally; the scary sound effects, Goth Victorian dressings, lots of candles, and plenty of red velvet work toward a great, old fashioned, classy atmosphere. This chick spin on Bram Stoker’s plotting is unique, juicy, and dangerous-all these sexy women with secrets, screams, and fangy hysteria!  This probably wasn’t the first of the Hammer Dracula series that I saw growing up, but it’s the one that sticks in my mind best- mostly because of a sweet climatic finale.  Granted the inconsistencies are iffy, but that windmill of danger, doom, and retribution is classic awesome.
Creature from the Black Lagoon – Despite director Jack Arnold’s (It Came from Outer Space) scary but well done creature design, clear underwater photography, and crisp black and white action still looking damn fine, today you would never know this 1954 classic was a 3D release.  Sure, it’s tough to tell the men apart sometimes, and you have to wonder about the latent kinky between Julie Adams (Tickle Me) and our eponymous amphibian.  However, there’s an extra touch of science versus nature, revenge reversal, and sympathy here that trumps any visual gadgetry of the time.  The music is great, accenting some fun but no less scary jump out moments, and it all combines for a damn entertaining eighty minutes.
The Evil of Frankenstein – Baron Frankenstein is back!  Once again solo, Cushing handles this 1964 third film in the mad scientist focused Hammer set with gravitas and complexity.   Not so innocent assistant Sandor Eles (Countess Dracula), Kiwi Kingston (Hysteria) as the more traditionally styled monster, and creepy hypnotist Peter Woodworthpe (Inspector Morse) do drag a few scenes down.  However, there’s great spooky and demented music, delicate Victorian accents, cobwebbed castles, and all kinds of cool evil laboratory Rube Goldbergs to keep things pretty and entertaining.  Yes, longtime horror studies may notice the flashbacks and continuity here doesn’t always make sense.  Big whoop.  Other than a few inconsistencies and some screen or matte work, there’s actually very little to woefully date this movie- unlike modern effects laden films that rush for the now and get passé within five years.  Director Freddie Francis (Dr. Terror’s House of Horrors) keeps things in the ‘made to look old’ classy vein, with plenty of tragedy, smarts, and some fun horror hysterics, too.  Frankenstein uses an oil lamp as a weapon, beat that!
The Haunted Strangler – Boris Karloff (Bride of Frankenstein) stars as a meddling novelist in this 1958 Victorian thriller packed with amateur detective mayhem.  Despite our oft horror expectations of Big BK, he’s on form as a pesky do-gooder highly motivated in digging up an old serial murderer case.  Even if it’s black and white and a little small scale for 1860s London and I’m not sure one can call this one total horror, this all looks period spooky good.  Bones, rats, gravestones, and some kinky for the time on screen and off- intense prison whippings, lengthy can can routines, and drinks splashing all over up close be corseted bosoms!  Yes, perhaps things get silly and obvious for the big reveal; but Karloff keeps the plot intense and entertaining. Besides, one of the victims is named ‘Martha Stuart’, which has to account for something.  And there’s even subtitles and features on the new Criterion DVD release.  Sweet.
London After Midnight – This pseudo restoration of the 1927 lost Lon Chaney (The Phantom of the Opera, The Hunchback of Notre Dame) classic uses script, score, and stills to recreate director Tod Browning’s (Dracula, Freaks) murderous vision as best as possible. Film students or old school enthusiasts will probably want to take a gander just for the novelty or Chaney’s masterful get-ups. Others- like my Dad- will find the not so silent non-moving motion picture annoying as hell.  Technicalities aside, this is a dang fine drama of suspense and mystery.  The eerie presentation and well-styled plot easily captivates the viewer for its short less than an hour run time and doesn’t let up.  And yes, you have to, like, pay attention, and not, like multitask, and like read some stuff- because there’s no talking…What horror!
Mark of the Vampire – Okay, maybe London After Midnight isn’t for everyone. However, this 1935 remake sanctioned by director Tod Browing has all the grassroots vampire hysteria, cobwebs, and creepy crawlies a viewer needs in a horror mystery. Toss in some suspense, legalities versus the supernatural, and a few twists, and there isn’t anything hokey or un-entertaining here. The then-contemporary thirties onscreen charm and scary effects look lovely with the layered black and white photography, though the European townsfolk is stereotypical and Brit-ified like the usual screaming maid and mousy butler. Lionel Barrymore (It’s a Wonderful Life) is great, and while Bela Lugosi (Dracula) doesn’t say much, he looks downright spectacular.  On a personal note, I’ve come to the freaky conclusion that I look just like Carroll Borland (Scalps) as the undead Luna.  Make of that what you will. 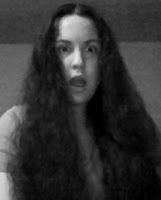 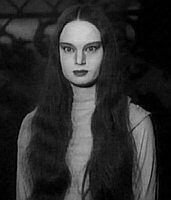 Posted by Kristin Battestella at 1:09 AM