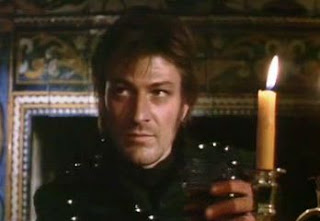 Sharpe’s Rifles a Nice Introduction Book
By Kristin Battestella
No, no, I haven’t forgotten Sharpe!  Though a lot of busy did take me away from reading Bernard Cornwell’s 1988 prequel Sharpe’s Rifles from time to time, I wanted to write a few literary notes in comparison to the telefilm. Usually, I post my book commentaries with the film they align to, but this one was too long for the comments section! I guess I had more Sharpe thoughts than I thought!
So do please also see our complete analysis on the 1993 television adaptation of Sharpe's Rifles here.
Cut off from his battalion in the Spanish winter of 1809, raised from the ranks Lieutenant Richard Sharpe must unite a small group of rifleman after the death of his Captain.  He buts heads with the big Irish rifleman Patrick Harper and reluctantly unites with Don Blas Vivar as he and his Spanish volunteers seek to deliver the Banner of St. James to Santiago de Compostela and unite Spain against French Colonel de L’Eclin and Vivar’s brother Count Mouromorto, a French sympathizer. To make things worse, Sharpe must protect The Parkers, stuffy Methodist missionaries, and their lovely niece, Louisa.
Naturally, character additions, changes, and small-scale productions create a few differences from book to film. Besides the insertion of Teresa for the debut Sharpe show, the book Sharpe’s Rifles concludes with a heavy cavalry battle and butchery fest, rather than a smaller cathedral stand.  Rifleman Hagman is somewhat prominent on the page, but remember, the other rifles were television creations.  The Parkers storyline is changed as well, tying into the bank draft plot of the film rather than creating a love interest for Sharpe as Louisa does here.  Though Teresa’s premature introduction creates a few inconsistencies for the subsequent Sharpe’s Eagle episode, her lady is a superior onscreen move. The written Louis is just a little too wishy washy- only there to create an obligatory love interest where none is really needed.  There’s enough going on with Sharpe’s struggle to lead the Rifles along with the back and forth with Vivar.  We don’t need a little girl to occupy space or distract Sharpe, especially since nothing good comes of it anyway.
The written Vivar, however, is given more dimension.  Instead of being a wise almost fatherly support, he’s slightly more harsh and desperate in his rescue of Spain.  Vivar’s kind, even bemusing on occasion and develops a great relationship with Harper, but there’s also a great element of competition with Sharpe. The tug of war over Louisa near the end of Sharpe’s Rifles spells it out, but the devil’s advocate conversations and battle strategy discussions do far more in showing Sharpe’s style and embittered English tone versus Vivar’s intelligence and Spanish pride.  Sharpe’s Rifles does unfortunately suffer from some weak villainy.  Colonel de L’Eclin feels broad like every other insurmountable French officer that we somehow know will get bested by Sharpe, and the visual character design of the Count of Mouromorto is far more creepy than the faux mysterious written version.  Vivar is actually more deadly and action forward than his turncoat brother.
Sharpe and Harper are great as always, but again I feel there wasn’t enough of them. The quiet character scenes are far more interesting than the historical battle details, even though those are sweet too.  Sharpe’s Rifles does fall prey to the big omnipresent battle for the finale.  Sometimes it is almost as if Sharpe is only a supporting player, a host and the battle is the focus of the tale.  Shouldn’t it be the other way around?  The French tricks and twists for the Santiago de Compostela siege are also totally obvious, and after an entire novel of building character, intelligence, and character intelligence, everyone is made to look kind of stupid. The reader is repeatedly told the right versus left and inside versus outside clues that we don’t need at the expense of the players.  The conclusion feels really rushed- three pages to wrap up three hundred page’s worth of story with Captain Hogan being introduced on the last page!- and sometimes, I get kind of tired of Sharpe for the big battle endings.  Yeah, there is a battle, Sharpe gets the bad guy, and he marches on.  They kind of all feel the same now.  But of course, when you like Sharpe and Harper you want to see them kick ass and bag the bad guys.
Sharpe’s Rifles was an elusive book for me to find a few years ago, and the edition I finally got is a red TV tie -in reissue with Sean Bean on the cover, hehe! Though slightly uneven among players and battles, and again a step down from the original core of Sharpe books, Sharpe’s Rifles is the perfect example of a true prequel.  How did our Sharpe and Harper meet? Overall, that question is answered, and for those looking to jump into the written Sharpe, Rifles is a good spot to dive in.
Posted by Kristin Battestella at 2:06 AM