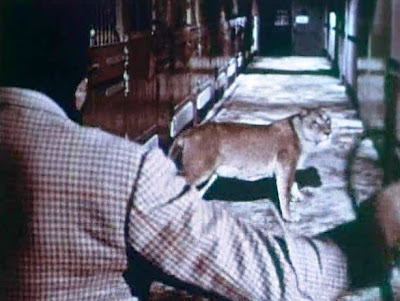 More Old School Horror Mayhem!
By Kristin Battestella
Let the Spring roar in as we travel back in time and celebrate with more scares, monsters, and freaky of yesteryear!
Circus of Fear – The production values for this 1966 AIP thriller do look old, with a lot of darkness, very poor video quality, and weird sound that can certainly lead to some onscreen action confusion.  The near silent opening heist is also slow to get things underway for a 90-minute movie. Once the crimes begin, however, John Moxey’s (City of the Dead) little tale is not bad at all.  Some of the dudes are a bit of the same old hepcats, but it’s great to hear Christopher Lee (Have you not been to my blog before to learn the greatness that is Sir Christopher?) before we truly see him.  Of course, it’s easy to think he’s the killer thanks to his booming, lion taming statured self, but…  Leo Genn (Quo Vadis) is a slick investigator, too. The smart build from the seemingly standard action to the titular delights crisscrosses with fun circus and animal footage.  Unseen throwing knives, quick visuals, and first person perspective murders heighten this pleasant backdoor build of suspense.  Sure, it’s not really horror, but if you aren’t expecting all out scares, this becomes a surprising, intelligent, worth a look mystery. 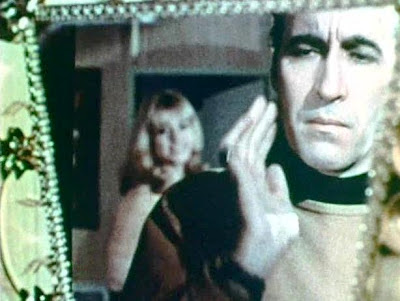 The Revenge of Frankenstein – Finally, finally I’ve got my hands on this 1958 Hammer sequel!  Now called ‘Victor Stein of the Switzerland branch’, Peter Cushing (I see your lack of Sir Christopher and raise you a Grand Moff Tarkin!) is once again delightfully ruthless in his delivery and actions- and looking fine while at it, too. A 19th century doctor with ladies packing into his waiting room, hmm… He seems so reformed to start, helping the poor and suffering patients- but we should know better! Cushing’s wicked suave villainy trumps all the inconsistencies in this series.  Despite director Terence Fisher’s (helmer of all except Evil of Frankenstein) best efforts, at this point, I don’t even think it matters what order you watch Hammer’s Frankenstein films. Fortunately, the stylized gore and expected Victorian flavor make up for any errors- even if the tone is more English than Continental.  The laboratory is sweet, and the bodily transformation for the hunchbacked Karl (Oscar Quintak and Michael Gwynn) tells a lovely story. Frankenstein’s just misguided, isn’t he? This new body is a good thing, right? Unfortunately, the extremes for science are just too murderous for the brain to handle, and the scares, shocks, and freaky deformities are perfection. 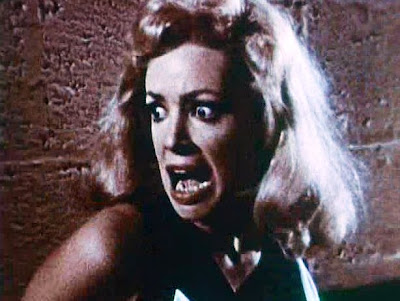 Sisters (1973) – Margot Kidder (Superman) is very convincing as twins in this AIP parallel act from director Brian DePalma (Carrie).  Though one wonders about Kidder’s French accent and forced Quebec angles, the New York time capsule is a treat. Ferry rides, a very young World Trade Center, and a great Bernard Hermann (Psycho) score accent the nostalgic styles and black and white uses. Old TV game show sounds, show within a show productions, and newsroom footage create space for voyeuristic ideologies, within within perceptions, and mind’s eye theories.  Intercutting and split screens build tension towards jump in your seat moments, and there’s cool fake seventies blood.  It’s not chick horror per se, but imperfect ladies duking it out conflicts the audience. Do we favor Kidder or Jennifer Salt’s (Soap) nosy but on to something reporter? Honestly, it’s just neat to see some hoofing it research instead of an internet montage! Barnard Hughes (The Lost Boys) and Charles Durning (Tootsie) are fun support, as is Salt’s real life mom Mary Davenport as her pesky onscreen mother who doesn’t understand this working woman thing.  There are dated and stereotypical racial tensions in the plot that I don’t want to spoil, too. Lisle Wilson (That’s My Mama) is actually identified by the other characters as ‘the colored guy’ after he wins a game show prize for ‘dinner at The African Room’.  Yeah, even wrapped in a fun, sexy opening and brief nudity, it still feels iffy for today.  The twin sciences might also be wrong now or just inappropriate, along with the crazy people scares, wacky nut house doctors, and brainwashing fears of the mentally ill.  I figured out the twists early, but this is still a treat in getting there. 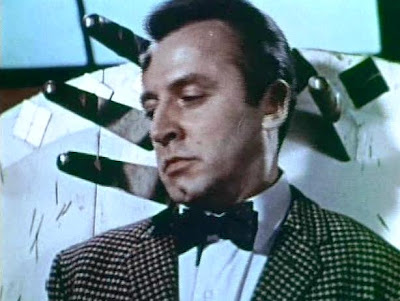 Torture Garden – Director Freddie Francis (The Evil of Frankenstein, hehe) and writer Robert Bloch (Psycho) team up for this 1967 Amicus anthology of forewarning evils.  Even though these 92 minutes are small scale with very dated, on the cheap décor; it’s still dang spooky, with a solid, demented carnival vibe. You wish your Halloween set ups were quality enough to attract a wonderfully insistent, Penguin on acid Burgess Meredith!  Though the dialogue is tough to hear, the unusual filmmaking angles and real English locations are great.  The sinister music and black cats in the Twilight Zone-esque First Tale ‘Enoch’ are sweet, too. These tales are solid, involved stories, and Tale 2 ‘Terror over Hollywood’ is sexy without the flash and nasty of today.  ‘Mr. Steinway’ adds Barbara Ewing (Dracula Has Risen from the Grave) and a disturbingly good classical score for Story 3- although twisted similarities to Psycho run throughout the show. Freaky Clytie Jessop (The Innocents) also moves between each tale, but the framing story is somewhat weak, with disproportionate story lengths and a rushed, even confusing conclusion.  Oscar winner Jack Palance’s (City Slickers, Shane) mustache is perfectly sinister, but strange to say, his part here seems like a would be poor man’s Christopher Lee.  Thankfully, always-classy pimp Peter Cushing is excellently creepy for the ‘The Man Who Collected Poe’ Tale 4 finale. 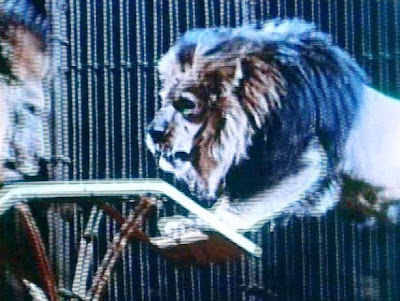 Meow!
Posted by Kristin Battestella at 10:58 AM

Lee is so good in Circus of Fear. Always nice to see him playing against type. His lion tamer/caring father is very sympathetic. Great post!

Hi Laura! Thanks for coming by again and commenting. And this time I caught up with you!

I agree, even if the movie is low budget or less than stellar, Lee always brings something of depth and class to the table. I love it!

Sisters is also available now on Hulu Plus as part of the Criterion Channel!