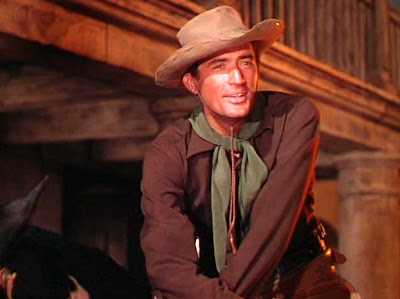 I Think, Therefore I Review is ringing in April by taking part in a special Birthday Tribute to Gregory Peck!

Our new Gregory Peck Greatness analysis and viewing list is coinciding with Flix Chatter's Beauty is Forever: Happy Birthday, Mr. Gregory Peck!  So be sure to visit them for more of the Peck Party!

Now then, onto the review respect...

Well there’s no time like a spring birthday to give some respect to the quiet greatness that is Gregory Peck, is there not?

Captain Horatio Hornblower – I feel like I’m going to say too little about this 1951 adaption of the original C.S. Forester Hornblower trilogy simply because I want to say so much!  Yes, a significant but saucy portion of the Flying Colours novel is avoided- a fifties hero such as dear Gregory would never have a French affair!  Nevertheless, director Raoul Walsh (They Died with Their Boots On) wonderfully combines the spirit and adventure of Beat to Quarters and Ship of the Line with vivid globe hoping naval action, great ship designs, and some good old sea faring flair.  And Peck portrays the introverted and often melancholy Hornblower smashingly!  It’s not an easy role to play thanks to the written complexity and inner angst, but Big GP adds layers of charm, subtly, and a hint of humanity while being no less masculine and badass. Upon seeing this film as a kid, I loved it so much that I up and got obsessed with the literary Hornblower, and they remain some of my most favorite books twenty years later!  Now, if only Virginia Mayo (White Heat) wasn’t such an inferior miscasting as Lady Barbara, but at least we have a dash of Christopher Lee (Lord of the Rings) to make up the difference. 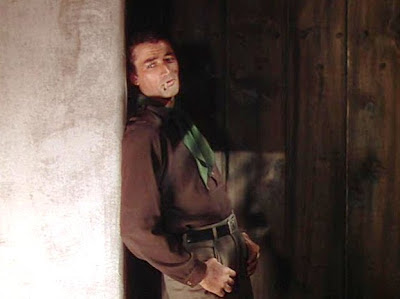 Duel in the Sun – Well well, Good Old Gregory is playing the villainous lothario for a change!  David O’Selznik’s notorious 1946 hot mess took every director and their grandma to complete, and it still thinks much too much more of itself than there actually is- narration, prelude, overture, exit music, and all. The latent thin line between love and rape and racism is all over the place, and an insipid, supposedly sexy Jennifer Jones (The Song of Bernadette) and a limp Joseph Cotton (Citizen Kane) contribute nothing.  A delightful and classy Lillian Gish (Birth of a Nation) is barely there, and Butterfly McQueen’s (Gone with the Wind) demeaned Vashti is a desperate and insulting attempt to akin to that greatness. While fans of the other cast can certainly tune in, in my mind, Gregory Peck is the only reason to see this picture.  Yes, it is tough to believe Our Man Gregory as the naughty boy to start, but the film is lifted whenever he’s onscreen.  The juicy ne’er do well Lewt is damn entertaining.  Hell, he’s even likeable and charismatic with his shameless self!  A must see for Peck devotees, even if you just fast-forward to his scenes. 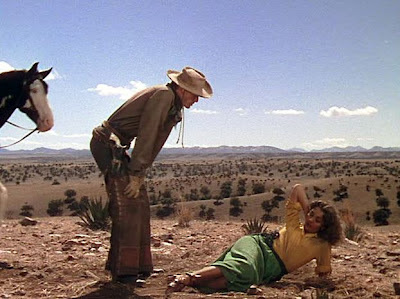 To Kill a Mockingbird – I don’t suppose there is much more I can really say about this utterly exceptional 1962 adaptation of Harper Lee’s modern literary classic from Oscar nominated director Robert Mulligan (Fear Strikes Out) besides the greatness that’s already been said by everyone ever.  When one needs to cite a picture that is as perfect as its book source, look no further than this Best Adapted Screenplay winner.  I suspect The American Film Institute knows its stuff, and it named Peck’s Academy Award winning portrayal of single dad and Southern lawyer trying to do the right thing Atticus Finch as America’s Greatest Movie Hero of the 20th Century.  By gosh, if we only had a political candidate as special as Atticus!  You can watch this in the classroom when your young for Scout (Supporting Actress nominee Mary Badham, This Property is Condemned), Philip Alford’s Jem, and Boo Radley (The Godfather’s Robert Duvall in his debut). Then again, as an adult you can still shed a strong tear for Brock Peters (Star Trek IV) as the wrongfully accused Tom Robinson. This film is a must see to say the least, and if you need to read one book in your lifetime, this should be it. 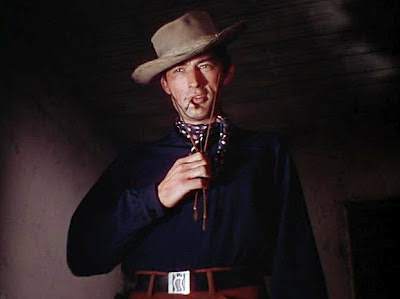 The Omen – Dashing diplomat Gregory Peck, a lovely Lee Remick (Days of Wine and Roses), wonderfully disturbing satanic chants, and Billie Whitelaw (Hot Fuzz) and Damien Harvey Stephens as the freakiest nanny and kid pair you’ll ever see! Maybe contemporary audiences might erroneously dismiss this 1976 quiet sinister because it’s not the slash and gore horror mess we so often churn out today. However, there are plenty of creeps, wicked deaths, and demonic shuddering still to be had here, with a perfectly tormented and fatherly GP caught in the crossfire. I don’t know why they bothered with a remake!  Seriously, who can replace Our Man Gregory? No one, and the slice and dice imitators completely fail against classy horror granddaddies like this. 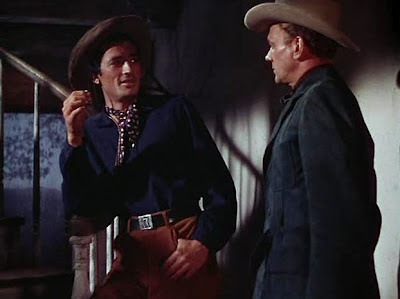 Roman Holiday – Reporter Peck- make that Best Foreign Actor BAFTA nominee Peck- woos the fish out of water Princess Audrey Hepburn (Breakfast at Tiffany’s) in this romantic time capsule of 1953 filmmaking and Italian splendor. The black and white photography sometimes hinders the Edith Head (All About Eve) costumes and royal grandeur, but it’s still enchanting decoration nonetheless- and the accolades followed indeed. Though coming from an aristocratic background herself, Audrey’s Oscar winning debut is charming, delightful, and still relatable and endearing to audiences high and low almost sixty years on. Cap it off with Tall, Dark, and Handsome, and any viewer should be sold. 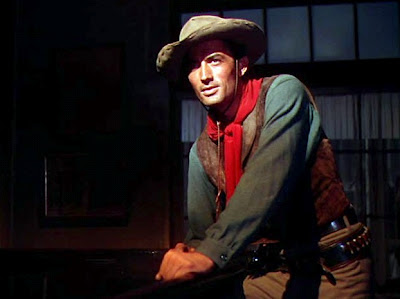 Spellbound – Oscar winner Ingrid Bergman (Gaslight, Anastasia) and a very young and charming Gregory Peck mix mystery, romance, nut houses, and psychoanalysis in this 1945 Alfred Hitchcock (Rebecca, Psycho) thriller questioning dreams and memory. Is our amnesiac Peck the killer? Surely no! Can gentle Bergman heal his mind before she’s the next victim? Exceptional performances by the leads, tight black and white direction and filmmaking by Hitchcock, and a great mystery with visual panache keeps this picture viewable-even after you know how it ends or watch it a dozen times.  This one is actually my favorite Gregory Peck film, and I am very biased- or couldn’t you tell?

Can’t get enough? Browse our Gregory Peck label for our previous reviews and stayed tuned for more. And be sure to keep up with Flix Chatter's ongoing Peck praise! Until then, here are a few more screen captures from Duel in the Sun to tide you over! 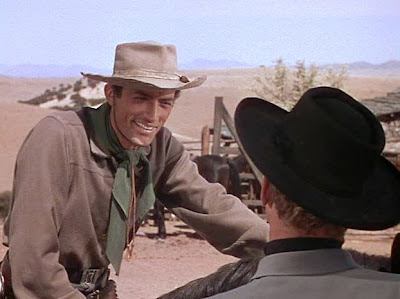 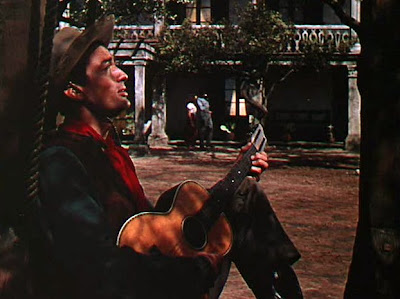 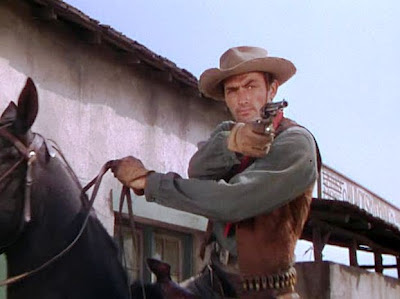 Posted by Kristin Battestella at 12:29 AM

LOVE this, thank you Kristin for joining the b'day party :D It's cool that you included all the photos of Lewt all over the post, ahah. He sure is one sexy scoundrel wasn't he? I tell you, I could not take my eyes off him, and to think that most people only see him as Atticus! I actually saw 'Duel' before I saw 'Mockingbird' so it's fun seeing Peck tackle so many different types of roles so convincingly. Thanks again for taking part, I included your review of Yellow Sky as well, one of my fave Greg's westerns!

Hi Ruth! It's been a virtual praise fest indeed. Thanks for letting I Think, Therefore I Review take part!

As I said, the movie in the end serves as the perfect Peck drool vehicle. I can see both. You'd like to think this handsome naughty grew up to greatness! I'm not sure what Peck film I saw first as a kid. Probably Hornblower or Spellbound. He just leaves a big impression!

Yay Yellow Sky! I still can't find that The Gunfighter vhs, though!