No one’s December is complete without Little Miss Dynamite, and this 1995 CD reissue Jingle Bell Rock puts all of Brenda Lee’s perennial hits in to one swanky session.

Naturally, we begin with Rockin’ Around the Christmas Tree, and who doesn’t love this ritzy little ditty, honestly? Known to today’s generation most likely thanks to its appearance in Home Alone, the decidedly fifties sounding guitar and brass blends remain hip and timeless. Though covered more than thirty times with multiple renditions in recent years especially, this original version still surpasses each holiday season. This Time of Year’s position in between two major Christmas hits, however, hampers its easy, mellow, traditional balladry. It’s not as sing a long-able or familiar, but it’s nonetheless a great lullaby that let’s Lee hold a note or two. 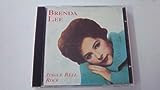 More famous as Bobby Helms’ original rendition, Brenda Lee adds a softer country swing to the expected Jingle Bell Rock fun. I’d rather hear her than the sweet tooth background chorus, but the fifties sentimentally keeps this a head nodding and toe tapping tune perfect for a casual trimming the tree or dancing about the kitchen while baking with the kids. Likewise, it’s almost as if Lee’s singing directly to the children by the fire on Strawberry Snow, another unique, original track slowing Jingle Bell Rock down in lullaby fashion. Again, this is an unusual placement to alternate the slower country songs amid two well known modern Christmas hits, but this is still a charming, cozy tune.

Silver Bells better captures Brenda Lee’s big voice in familiar, bittersweet, timeless ballad refrains. We can reminisce and whisper along before jazzing it up with her new, unexpected spin on Winter Wonderland. Is that a tropical whiff accenting those drums and quirky rhythms? These beats add an almost tongue in cheek smile to the same old same old whilst rocking out and keeping to the smooth feel of Jingle Bell Rock. Understandably, Blue Christmas is slowed and somber with time for every big, sad note, allowing the country crossover vibes some shine.

A Marshmallow World brings the fun back, and I can just picture little Brenda Lee in her big puffy skirt singing this with a lot of Candyland cardboard lollipops and gumdrops in the background. Despite its yummy lyrics, it’s decidedly happy and rousing and makes you want to get up and move. Unfortunately, as was the mid century style, all the songs on Jingle Bell Rock are a short 3 minutes or less, making this session a quick listen at just 24 minutes! It’s almost as if the reissuing makers wanted to make a fast buck on everyone wishing to capture Home Alone magic by owning Rockin’ Around the Christmas Tree on CD.  That may have worked 20 years ago, but this wouldn’t be prudent today when individual downloads reign. It’s also a bit unfair to the rest of the songs here, as none of these tunes is bad. Granted, some of the softer, unknown tracks won’t be everyone’s contemporary cup of coco, but Jingle Bell Rock is an overall pleasant sound even if it’s arraigned with no other standouts and plays a little too safe or generic for the unique, big voice at its disposal.

Since it was a single from Merry Christmas with Brenda Lee in the past, I’m surprised Christmas Will Be Just Another Lonely Day is somewhat unfamiliar and isn’t heard more on radio today amid the now constant months of holiday airplay. One wouldn’t know this wasn’t any other break up song – except for the lyrical December mentions – thanks to its decidedly and absolutely pop stature. Normally, I might be a little angry at such a secular takeover, but this treat is still toe tapping catchy and has some big room for that big voice. The Angel and the Little Blue Bell returns to the easy, sentimental fashion and concludes Jingle Bell Rock with tender storytelling lyrics, almost in a goodnight, sleep tight harmony.  You can put the kids to bed with this one, indeed! While information on this particular Jingle Bell Rock compilation is a little tough to find, it appears this is simply a reissue of Merry Christmas from Brenda Lee with two tracks missing, Santa Claus is Coming to Town and Frosty the Snowman. Other Brenda Lee holiday reissues and compilations are not only available but numerous for individual download desires, and Rockin Around the Christmas Tree: The Decca Christmas Recordings Remastered seems to combine all the tracks from her two holiday albums in one place.

Brenda Lee’s big voice and small stature makes Jingle Bell Rock a friendly, nostalgic listen for old school fans and a fun, holiday good time for today’s little ones to sing along. Obviously, it’s completely secular and thus smooth for the seasonal office or classroom. Perhaps it’s not the best compilation thanks to the somewhat uneven order of the tracks, but contemporary listeners aren’t bound to album listings and official downloads of Jingle Bell Rock are available for audiences to pick and choose as they wish. Despite its quick, seemingly standard approach, overall Jingle Bell Rock is a dang catchy little time that easily fits into today’s playlists.

Posted by Kristin Battestella at 4:43 AM