From its fun album cover and festive music to reverent moments and mellow notes, the squeaky clean musical imagery of the brother and sister duo known as the Carpenters rings true in this 1978 family friendly Christmas Portrait LP.

Arranger Richard Carpenter leads off Christmas Portrait with a quiet O Come O Come Emmanuel vocal before the five minute instrumental Overture of Deck the Halls, I Saw Three Ships, Have Your Self a Merry Little Christmas, God Rest Ye Merry Gentleman, Away in A Manger, What Child is This, Carol of the Bells, and O Come All Ye Faithful. While Have Yourself a Merry Little Christmas and Carol of the Bells have bigger treatments later on the album, it would have been stunning to hear all these carols complete by Karen Carpenter, one of the greatest 20th century female voices. That would have been glory aside, this is a great little medley of family friendly carols to get the seasonal spirit rolling. A smooth mix of brass, jazz, tender, merry, and medieval tickle the ears of one and all before a big orchestra finish. Christmas Waltz slows the session down a notch and feels slower than the seemingly jolly Sinatra staple, yet it’s a fittingly seventies update with wintry fluff and Karen’s big bittersweet notes. It is however too short at just over two minutes.

Likewise, Sleigh Ride begins soft with just Karen’s inviting opening lines but quickly turns into a whimsical rendition with more of Richard’s harmonizing and vocals than some casual Superstar Carpenters listeners may expect, as so often audiences think of her awesomeness and not necessarily his behind the scenes. Richard’s singer/songwriter folk-esque arraignment and the happening swift are easy for everyone to sing along to as they sway about the tree. Some of the musical bells and whistles are a bit dated, too seventies innocent or youthful for such mature sounding voices, but this bell bottom time capsule creates a December young at heart nostalgia before segueing into It’s Christmas Time/Sleep Well, Little Children. It’s Christmas Time has an effortless, music box tone and classical harpsichord design. Instead of The Hustle, one expects to break out some Minuet steps and tire themselves out for the pleasant choir whispers of Sleep Well, Little Children. The kids are indeed put to bed with this lullaby pillow cloud softness while the full en force Have Yourself a Merry Little Christmas sentimentally speaks of the adult melancholy. This is of course already a mellow tune, yet it’s made even more bittersweet with Karen Carpenter’s vocals. If you aren’t thinking of Judy Garland’s dynamite with this tune, then you’re thinking of Karen’s rendition here. Her voice is simply meant for a song like this, and this is the longest single track on Christmas Portrait.

Of course, Karen’s deep, emotional style doesn’t feel meant for fast songs and she sounds slightly different from their Close to You, eponymous album, or A Song for You days on Santa Claus is Coming to Town. Although anything I perceive as flat could simply be from the ills of a warped record, the Carpenters did previous record a slower version of this children’s admonition. Sure, it’s a bit too quick in tempo and only a minute long, but this ditty is also unfortunately squashed between two seasonal and perfect ballads. The Christmas Song is another slow seemingly brooding mid century piece just perfect for Karen’s stylings. Just hearing her linger on the somewhat lesser heard opening lines makes this sentiment worth the wait indeed. Thus far Christmas Portrait feels like a tender seasonal delight, but Silent Night is actually the first full length carol with Karen’s lead. That voice and this tune, that’s all the spiritual needed to put Side 1 down for the night in perfectly reverent lullaby fashion. The building angelic arraignment from Richard and the backing choir wonderfully lifts without becoming a bombastic, big finish rendition. Karen does all the verses too, and although this isn’t a long track at just over three minutes, the listener gets the feeling that every spirited note and heavenly string is going to take however long it is going to take. 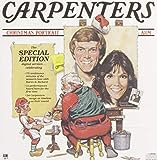 Let’s flip our vinyl over and begin Side 2 of Christmas Portrait with the unnecessarily hyper Jingle Bells. This rendition comes off as a weird, speedy little miss – a one-minute scat wannabe that’s way too fast yet can’t get over with quickly enough. First Snowfall/Let It Snow is a much nicer and softer sentiment, another pleasant, breezy nostalgic ride combing seventies swift with a trace of fifties youth and memories in its first leg. Likewise, Let It Snow is a little faster but continues the old-fashioned ring a ding ding hip. Carol of the Bells, however, is a sweeping instrumental piano treatment from Richard. Its pulsing, fast-paced rhythms imply an Old World secret or hidden magic of Christmas at work just beneath the Solstice’s veil – making for a perfectly atmospheric winter tune.

And of course, we come to the nouveau holiday essential Merry Christmas Darling and it’s of it’s time yet instantly relatable dreams and thoughts of loved ones. Although this track on Christmas Portrait is a new recording – not the oft-heard original single – the slow, brooding, long notes from Karen are all here along with room for us to sing along to Richard’s backing sounds and easy style. Those three titular words and their soft refrain will get stuck in your head. How much so? I had Merry Christmas Darling stuck in my head for days before I finally listened to my Christmas Portrait LP!  Just knowing it was here was enough to rouse the holiday humming, as does the mere mention of I’ll Be Home for Christmas. Perhaps these two mellow merriments are too similar to be back to back, but again, this low, tender type of tune is so Karen Carpenter the placement doesn’t matter. Toss in a few rendition changes, lengthy ad lib notes, and some backing chorales and we’re down in the dumps with this familiar, weeping seasonal. Thanks to this largely secular session, Christ is Born is a somewhat surprising track for Christmas Portrait. Such a reverent tale makes the listener again wish we had a totally gospel set with Karen. Can you imagine? This Perry Como recording may not be a well-known tune today, but its lyrics and big alleluias are certainly spiritual enough to strike a chord.

Christmas Portrait looses some of its holiday luster with this uneven five-minute plus medley of Winter Wonderland/Silver Bells/White Christmas. Winter Wonderland is erroneously sped up when it could have been another graceful Karen solo, and an alternating, hectic choir competes with her slower moments before the sudden, unusual Silver Bells. Though brief, too many extra high notes and musical littering ruins what is usually such a subdued ballad. Thankfully, White Christmas salvages some merit with its traditionally bittersweet refrain. The  wartime origins survive in the end, but I’m not sure how these normally can do no wrong classics got squished together in this jumble – the arraignments don’t match and each is more than due its own time. Fortunately, Karen takes her time in sending out Christmas Portrait with Ave Maria. This might be an odd choice to conclude the album with such lovely church expectation – it’s even a bit deceiving to open and close with carols when the set is generally seasonably neutral. Though meant for more operatic vocalists, the anticipated Carpenters magic comes in for the big Latin repeats and Christmas Portrait bows in respected religious fashion.

CD options for Christmas Portrait vary, with an initial release compiling its track listening between Christmas Portrait and the 1984 album An Old-Fashioned Christmas. The Carpenters: Christmas Collection, however, is a faithful two set CD or download with the original LP order intact. Christmas Portrait itself could have been a double vinyl release – there’s certainly enough holiday material only singers like Karen Carpenter can deliver to fill such an album. Indeed An Old-Fashioned Christmas was composed of more material from these sessions and released by Richard after Karen’s untimely death. Christmas Portrait has a few stylistic ups and downs, granted – even on a holiday release, not everyone today will like the Carpenters’ wholesome style. However, this is a perfect time capsule of the period thanks to its breezy yet classic and timeless tunes. It’s jolly and festive as needed but tender and even mournful at times, and Christmas Portrait provides a traditional, family friendly, casual seasonal mood fit for a sophisticated party or baking with the kids.

Posted by Kristin Battestella at 9:20 AM