From Russia with Love


From Russia with Love – What’s Not to Love?

From the wonderfully simple pre-title sequence fake out and onscreen chess matches to cat and mouse games, suspenseful train bound conversations, and dangerous water escapes, the second 1963 Eon produced James Bond picture From Russia with Love just about has it all.

The mysterious SPECTRE organization’s Number 3 Rosa Klebb (Lotte Lenya) uses her previous SMERSH position to enlist innocent Soviet clerk Tatiana Romanova (Daniela Bianchi) in luring MI6 agent 007 James Bond (Sean Connery) to Istanbul, where he will face revenge for his killing of SPECTRE operative Dr. No and unwittingly help destabilize covert global operations in SPECTRE’s favor. Their assassin Red Grant (Robert Shaw) shadows Bond in Turkey while 007 and British ally Kerim Bey (Pedro Armendariz) pursue the stolen and much sought after Lektor decoding machine. Once Tania’s defection and the Lektor are secured, Bond sets off toward England on the Orient Express – but Grant and more SPECTRE accomplices, traps, and intrigue lie in wait…

Dr. No director Terence Young helms this adaptation of Ian Fleming’s fifth Bond novel replete with SMERSH meets SPECTRE debut action and us versus them Cold War intensity from returning screenwriter Johanna Harwood and future franchise writer Richard Maibaum. The opening villainous perspectives and what you don’t see Blofeld implications add a wonderful mirror to the expected MI6 chat with M, quips from Moneypenny, and training or gear from Q. Granted, the Lektor is a typewriter-esque MacGuffin plot point, but its theft and the vengeance over Dr. No keep the action moving amid the Russian, Turkish, and Bulgarian twists and turns. While the pace does drag a touch before the confrontations in Turkey and its tough to tell who is who or who is using whom and what game is being played, that’s also kind of the point of From Russia with Love. Some globe hopping can be confusing as well, but this storyline is relatively linear, allowing for a streamlined pursuit and paired down, mano y mano finish. Blessedly, From Russia with Love is also not of the time Cold War political or dated with heavy debates and analysis and thus remains charming and watchable. Perhaps we take the ease or difficulty of the international travel seen here for granted, but great map overlays and train montages capture Bond’s dangerous European escape. Of course, there’s an underlying innocence and tenderness as Tania is swept up in the SPECTRE intrigue, too, and some gadgets and spy hijinks are simply good fun. Station T is in Turkey, Y in Yugoslavia, archaic cameras are also recording devices, incriminating film is actually film, and a mere smile lets you walk into an enemy embassy right before it’s bombed.

Thanks to From Russia with Love’s slightly Empire Strikes Back villainous leanings, it takes almost 20 minutes for Sean Connery to appear as Bond– fashionably late to his MI6 briefing with his tiny sixties shorts, naturally. This should be a simple assignment for 007, for this time he’s supposed to schmooze the girl and retrieve the Lektor for Queen and Country. Of course, Our Man James leaves dames all over Europe instead – sometimes two at a time – followed by excellent quips, wry delivery, and perfectly timed Bond tunes. Despite a darker more action oriented approach, From Russia with Love has time for barely there towels, saucy bedroom scenes, and girls whose mouths are too big – or just the right size. Connery is swift and smart in the one-on-one wordplay as well as the juicy moments. He’s badass in a fedora and still gets rough and tumble for helicopter dangers and the big speedboat finale. Daniela Bianchi (Dr. Kildare) may provide a more innocent Bond Girl as duped clerk Tatiana Romanova, but her increasing heart for Bond and her eventual questions about the spy system are believable and endearing. Her softness works in the plot and contrasts perfectly with her harsh superior Klebb. Then again, where else would a women meant to seduce Bond meet him but in bed? It’s perfectly understandable that this scene is now used to test prospective Bonds and Bond Girls. Who’s teasing whom and is this really about the romance or the spying? Tania is both deeply entwined in both and yet technically uninvolved or unaware of where SMERSH stops and SPECTRE begins. The audience relates whilst going along for the ride thanks to charming if dubbed dialogue, just enough skin, and post-innuendo cigarette smoking. 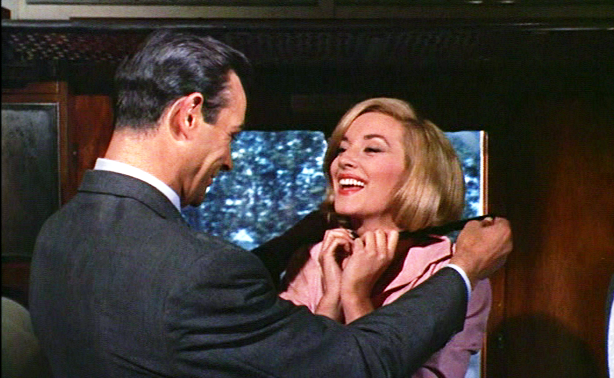 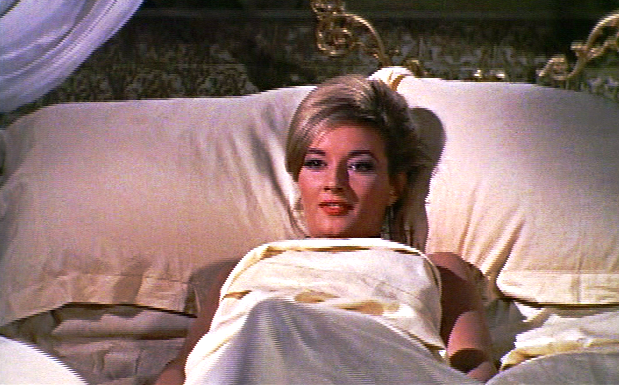 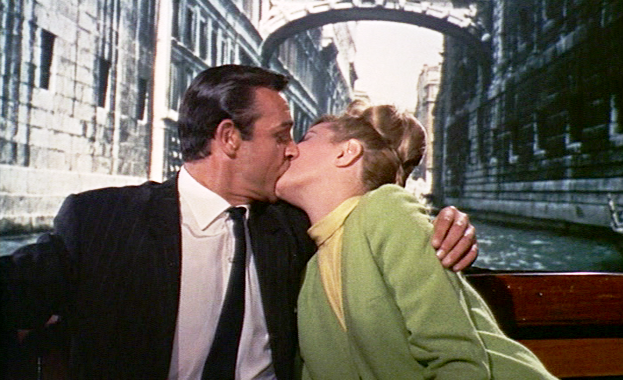 By contrast, Robert Shaw (Jaws) matches Bond toe for toe as the largely silent and bleached cold SPECTRE henchman Red Grant. Where Bond is often a little too upfront about his spy game, Grant slowly and steadily works behind the scenes to achieve his employer’s means. I don’t want to spoil From Russia with Love for the few viewers who haven’t seen it, but Grant’s antithesis appearance adds wonderful tension – especially because this slick, enemy workman is so deadly, gritty, and realistically based instead of like the franchise’s later, more fantastically hung up evil associates. Unlike the usual Bondian formula where half the picture is spent with near miss henchmen or sexy villainesses before over the top socials and meet and greets with the quirky Big Bad, Grant sprinkles From Russia with Love with his own assassination motivations and even a little out 007ing 007. Likewise, SPECTRE and their numbered agents add to the MI6 gone bad rivalry with Lotte Lenya’s (The Roman Spring of Mrs. Stone) Number 3 Rosa Klebb. The ex-SMERSH gal is crusty, unforgiving, but bizarrely motherly and latently lecherous toward Tania. It’s everything a Bond Girl isn’t, and it’s simply glorious!

Fortunately, the rest of the supporting players add more fun and trivia to From Russia with Love. SPECTRE’s Number 1 a.k.a. Blofeld is simply credited with a “?”, and Eunice Gayson makes her second and final appearance as Sylvia Trench – the would-be perpetually interrupted girlfriend of James Bond. Although this debut appearance is brief, Desmond Llewelyn is called by his proper Boothroyd name rather than as the “Q” we would come to know and love. Lois Maxwell has some cute moments as Moneypenny – and I do so love a good hat toss! – but Bernard Lee is perfectly stuffy as her M boss, too. Pedro Armendariz (Fort Apache), however, is suave, cool, loyal, and bittersweet in his final performance as Istanbul chief Kerim Bey. He has some of the Bondian lady love, too, and From Russia with Love provides a nice helping of bikini clad women, gals in sassy frocks, and ladies in uniform. Be they friend, foe, or mere eye candy, these Bond Girls speak in numerous languages or accents and gasp, even advance the plot along with the titular foreign flair. The fight for her man gypsy camp girls do seem slightly stereotypical or dare I say it, pointless, but I’m sure some men would argue belly dancing is practically required in a 007 picture. Thankfully, the lady dubbing in From Russia with Love is also reasonable and not nearly as obvious or ridiculous as some subsequent Bond productions.

Well, 007 certainly has a loaded briefcase in From Russia with Love – literally! Nicely confined sets, hotel rooms, and train cars keep the plot personal, intimate, and dangerous along with hand-to-hand, close quartered combat and hidden knives. Some of the fights don’t have any spectacular finishes per say, only a quip or two from Bond, but these largely rough and silent battles seem more deadly – you know, the way real spies probably do it! Of course, there’s still plenty of room for fast paced truck chases, helicopter pursuits, and fiery aquatic stand offs. I waited to re-watch From Russia with Love so I could see again for the first time on blu-ray, but Netflix was always playing the waiting game with it. Fortunately, I received the limited edition blu-ray set Bond 50: The Complete 23 Film Collection for Christmas, and From Russia with Love looks magical indeed! No obvious lines mar the backdrops and matte shots, the nighttime gypsy raid photography is just right, and the color is somehow revitalized in de-saturated, made to look old perfection. Miniatures and set interiors blend seamlessly with stunning real locations such as Istanbul and Venice while the Orient Express train scenery is perfectly lit. Brief SPECTRE super villain yachts and island fortresses establish enemy might and power, and that shaking belly dancing and whole lot of fringe in the fun main title design anchors the colorful, sexy innuendo. Those opening credits and their neon flair don’t need much else, and the titular song with vocals by Matt Monro is smartly used as radio romance music within the film along with the swanky, perfectly placed John Barry orchestration, the new 007 mix, and the expected James Bond Theme. Commentaries and trailers are usually a given when it comes to video special features, but Ian Fleming treats, storyboards, character breakdowns, and more behind the scenes fun put the spit and polish on From Russia with Love’s delightful blu-ray release.

Defections, double agents, double crossings, global intrigue, dalliances for good and ill –almost all the clichés and patterns we expect in a Bond picture originate with From Russia with Love. Sure, the poison shoe dagger is reaching and has become the likes of Austin Powers parody gold. However, if that’s as fantastical as From Russia with Love gets, then I’m not complaining. Audiences who have dismissed the franchise over the years or think they dislike the gadgets and excess of what is the seemingly typical Bond design of the later Moore or Brosnan eras should also give From Russia with Love a fresh chance. This is a complete, all around action picture from start to finish for mainstream thriller fans and there’s nothing not to love for Bond Lovers.

Posted by Kristin Battestella at 12:53 AM