Phantoms, spirits, ghosts, and the supernatural – who doesn’t love a good old haunted house tale, ghost story, or bump in the night scare? Regardless of if you spell it spectre or specter, don’t take in these apparition accounts alone! 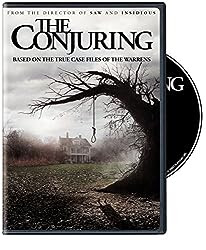 The Conjuring –Vera Farmiga (Up in the Air) and Patrick Wilson (Insidious) lead this 2013 possession thriller along with Ron Livingston (Office Space) and Lili Taylor (Six Feet Under). Although some of the cast may seem a bit too modern and it’s tough to tell the kids apart at times, the 1968 beginning has the fashions, feeling, and creepy dolls for immediate atmosphere. No attempted cool opening credits waste time – the opening crawl explaining the true story basis and Warren demonology casework does just fine before the 1971 station wagons, old TV static, home movie reels, and ominous music accent the main Perron tale. Granted, there is always a hardened dad, nobody pays attention to the dog’s warnings, the clocks all stop at the same time, and they go into the previously boarded up basement! The Warrens also seem fake and over confident to start, withholding information amid a slightly uneven back and forth establishment of the Perron haunted house period Poltergeist meets Ghost Hunters Warren family relationships. Fortunately, the plots and sympathies come together amid foggy lakes, eerie wide camera lens perspectives, uneasy upside down pans, creaking doors, and sleepwalking kids – that’s a creepy blindfolded and clapping game they play! The editing on the jump moments from director James Wan (Saw) is surprisingly subtle, startling the simmering audience at different times with different things and allowing for a personal build instead of in your face, all the time unfulfillment. Kids in peril, bodily bruises, excellent silence and darkness, heavy breathing, and over the shoulder fearful reveals keep the phenomenon intimate despite the old time research montage and cliché centuries old history. Most visual tricks happen in camera; the pacing focuses on fear and personal reaction even as complex, multiple occurrences mount thanks to an off kilter contrast, stillness, or action movement. Horror fans accustomed to recent under 90 minute standards may find the near two hours here long or too similar to classic supernatural fair, but the tension follows through from start to finish, progressing to a wild exorcism finale. Ghost Story –Fred Astaire, Melvyn Douglas, Douglas Fairbanks, Jr., John Houseman, Patricia Neal, and a bewitching Alice Krige shine in this supernatural 1981 tale adapted from Peter Straub. Firelight, dangerous snowscapes, and perfect mood music accent the storytelling atmosphere, and cluttered old houses, period décor, quaint thirties charm, and a mysterious Victorian derelict anchor the classy old guard and their demented Chowder Society. Ghostly laughter, eerie sounds, old time elevators, and scares unseen until it’s too late match the hazy effects and dreamy style – keeping the viewer unsure but intrigued. Is this a dream, reality, guilt, or apparition? Granted, the plot isn’t faithful to its source, bad effects are humorous today, and some of the acting crazy is hokey. Those who don’t know the cast may also find it tough to tell who is who and be confused in putting the connections together. The unusual framing design and back and forth flashbacks add some humor and romance that may detract from the spooky tone, and wise horror viewers will spot the simplistic plot holes, too. However, it’s pleasing to see older protagonists deal with sudden shocks, death, sex, and mature topics while clashing over generational changes, phantoms, and longtime regrets. It’s both thrilling to see the jolly old school unravel and suspenseful to watch uncomfortable nudity and an ominous we don’t know what lingering over any seemingly happy times. We like our gent ensemble yet suspect the past illicit – thanks to the period settings and refined performances, the decades old scope and personal stakes have room to stand out even if this isn’t all that scandalous compared to contemporary tales with lots of gore, cults, and torture. The paranormal tone and gothic atmosphere are not super scary for the most part, yet there are some excellent, intense moments here along with a macabre little mystery and ghastly finish. 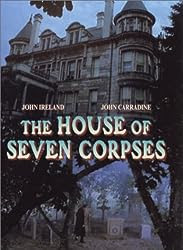 The House of the Seven Corpses – Cranky director John Ireland (Red River, All the King’s Men), the aptly named John Carradine (Bluebeard, The Grapes of Wrath) as creepy old man Edgar Price, and aging actress Faith Domergue (This Island Earth) star in this 1973 haunted house film within a film full of red decor, black candles, and color tinted photography. A creepy death reel further sets the gothic mood along with Outer Limits music, feline fears, and spooky old house bumps in the night. Who knew behind the scenes equipment, filmmaking troubles, seemingly innocent script incantations, and shooting in a haunted location held so many perils? The viewer is just waiting for a retractable knife switch a roo stabbing! The voices are tough to hear most of the time, but the light humor and snarky banter works because the ensemble knows they are making a scary movie – the wooden, fake filming and crappy scenes are a fun audience comfort before the real suspense and spine chilling scary mounts. Conflict amid the onscreen crew and production furthers the fears and shocks as the titular risings begin while plenty of great screams, twists, and ghoulish intensity keep the viewer invested even if we suspect how the scares will play out. Although the ending is somewhat unexpected, even abrupt because the house history is confusing and left unresolved thanks to some plot holes, this is still a bemusing, atmospheric 90-minute ride.

Lights Out – I like short films and wish they got more mainstream attention and recognition, but I don’t think I’ve ever reviewed something this short at under three minutes. I can talk longer than this is! However, director David F. Sandburg’s (Earth Savers, Ladyboy) winner of the Bloody Cuts Horror Challenge 2013 starring Lotta Losten got me. Not many purportedly scary films these days can capture this unseen suspense, the increasing infringement of the unknown in the sanctity of the home, bedroom, and childhood under the covers safety. How can you flight or fight when fear is coming to you? Sure, jaded viewers may balk at the lack of dialogue or motivations. Why not call a friend in the night? Leave? Lock the door? Scream! Perhaps the end isn't as fulfilling as the initial shocks that either glue you in for the topper or make you drop your precious mobile viewing device, either. The lighting, shadows, and design, however, are top notch, and we’ve all been there – thought we saw something in the dark or retreated at the paranormal possibility. This relatable hook and scares totally works. If bigger industry names or Hollywood studios don’t notice Sandburg and this smartly simplistic viral sensation, they should certainly take note at the taut tension and straightforward filmmaking. Is it easy to keep up this intensity at this short a sample? Sure. Was the minimal design required by the competition and an indie shoestring budget? Probably. But is this how modern horror should be done instead of all the in your face 3D mayhem, fluff, trite, and obnoxiousness? Yes.  View if you dare on Sandburg’s page here: http://vimeo.com/82920243.

But Not so Delightful… 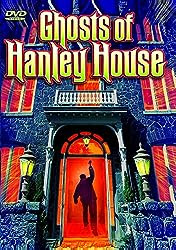 The Ghosts of Hanley House – Great thunder, screams, fun sound effects, footsteps, shadows, ticking time, and chiming grandfather clocks set the mood of this 1968 black and white haunt. Objects moving by themselves, unseen chokes, and opening doors lay on the titular further along side antiques, séances, and creepy décor. Unfortunately, bad music, faux hep cat cool, dated dialogue, ridiculous up close shots, flawed editing, and wooden acting from the unknown cast hamper any chance this seemingly tired premise or its twist might have had. One can forgive low budget feelings, the dares to spend the night in a haunted house, the cliché old woman who knows the story, and the inexplicably psychic lady believer, sure. However, viewers can’t overcome the overlong 85 minutes, padded plot, and poor audio – it sounds like they are throwing their voices from off camera! The slow pace and stupid actions are too tough to enjoy, and the darkness or flashlights going off and on will be annoying to some. These lighting schemes ought to be eerie and effective, forcing the audience to look and listen for the ominous sounds and scary reveals. But sadly, the dry scripting and stilted cast ruin any atmosphere, and there’s almost no reason to care once we get to what should be a very fine kicker. Pity.

Posted by Kristin Battestella at 3:08 AM


Portions of this review are now featured in the Horror Addicts Guide to Life anthology!


Do you love the horror genre? Do you look at horror as a lifestyle? Do the “norms” not understand your love of the macabre?

Despair no longer, my friend, for within your grasp is a book written by those who look at horror as a way of life, just like you. This is your guide to living a horrifying existence. Featuring interviews with Midnight Syndicate, Valentine Wolfe, and The Gothic Tea Society...

For more information, visit Horror Addicts.net or join the gang on Facebook!