Let’s look back to the previous centuries with these period films and old fashioned serials from the turn of this technological century. Shall we? 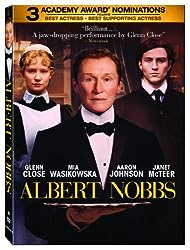 Albert Nobbs – Glenn Close (Fatal Attraction), Janet McTeer (Tumbleweeds), Mia Wasikowska (Jane Eyre), Brendan Gleeson (Braveheart), Aaron Taylor-Johnson (Kick-Ass), Maria Doyle Kennedy and Jonathan Rhys Meyers (The Tudors) tackle social and gender taboos in this 2011 Irish drama. Oil lamps, pocket watches, and lacy frocks set the 19th century mood alongside hotel maids and formal dinner settings, and we recognize Close despite the nom de plume, gruff voice, and masculine wrappings. Why has this woman assumed such a humble ruse? Nobbs has been counting her meager tuppence tips for decades, however, this is not a con but rather a tender, relatable situation – especially compared to arrogant, wealthy patrons. Mr. Nobbs is clearly capable on the job, so what does it matter if he is a she? Although costume parties, other disguised roles, and hidden subtext add to the discussion, the line between serious or funny and personal or social commentary is uneven. It's played too comical that one would find kindred souls conveniently underfoot, yet fearing discovery, one can't to thine own self be true. Back story exposition implying man hate, sexual trauma, and “turning” women toward this masculine switch also feels mishandled. While this tone may be intentionally hypocritical – same sex relationships are frowned upon unless you can pay to keep it quiet but older men having affairs with younger women or heterosexual but abusive, pimp circumstances are okay – these side plots loose steam for the finale. Work equality, cross dressing, lesbianism or asexuality, marital deception, and reversed gender roles add heaps onto a conversation that works better with just the intimacy and self realizations from Close and McTeer. This was a passion project for Close and there should be more strong lead roles for women, masculine or not, and I applaud the effort in bringing not so new issues to light. Prudish, traditional period piece fans may not like the unique dialogue, but social historians and audiences seeking gender topics will enjoy the whimsy and performances here. 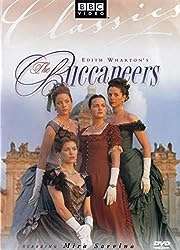 The Buccaneers – Mira Sorvino (Mighty Aphrodite), Carla Gugino (Spy Kids), Cherie Lunghi (Casualty 1900s), Jenny Agutter (Logan’s Run), and more mix the New American money with the Old English nobility for this four hour 1995 adaptation of the incomplete Edith Wharton novel. Divine costumes match the romantic notions, cross continental décor, fine locales, hefty manors, and pretty countrysides, and we at the 21st century bottom love such visual splendor. With these past social pressures and up turned, judgmental noses, however, being at the heights isn’t enough – it’s the right society trends and getting invited to the best parties in complete Dickensian who you know wrapped in for love or money sponsorship. This ‘keeping up with the Joneses’ excess, training, planning, and trapping is obviously an unsustainable pretense. Wharton herself came from the very estate that inspired the Joneses phrase, which is now a ruinous reflection of this gilded but embarrassing and bitter era, and it’s interesting now to think we are so different with our seemingly glamorous but gold digging, money for nothing celebrity indulgences. Some of the titular ladies’ plots and storylines do interweave unevenly while the frumpy ladies decide their fates over tea, and most of the men are written as limp, pedestrian louses. Despite being potentially dry and melodramatic, time here moves quickly with blink and you miss it traveling or pregnancies, and seriously, new fans of Downton Abbey haven’t been paying attention to all the previous British period dramas! In addition to literary scholars or historians having a comparative study and viewing analysis, there are enough pleasing characters, scandals, and twists to keep this quartet entertaining. 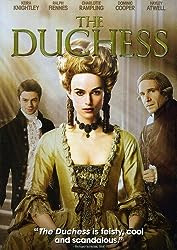 The Duchess – Georgiana Cavendish, Duchess of Devonshire, is the star of this 2008 18th century tale featuring the eponymous Keira Knightly (Atonement), her duke Ralph Fiennes (The English Patient), the always classy Charlotte Rampling (Swimming Pool), and friendly rival Hayley Atwell (Agent Carter). Paired down historical liberties are certainly taken alongside the too young arranged marriage, but all seems happy to start – until an awkward wedding night, producing an heir pressures, and marital expectations aren't as Her Grace had hoped. Knightly, however, is well poised, and gasp, the popular, outspoken duchess expresses herself and gets involved with Whig politics! Tumultuous affairs and love triangles add twists and turns, but this doesn't go for saucy sex and cheap skin despite its scandalous source. Sons are more important than daughters, women are blackmailed with their rightly or wrongly begotten children, and men are allowed to get away with anything while women have to take their abuses. The progressive talk might be lost on today's audience thanks to big, old speaketh words, but modern viewers can hate past ways and still understand the things that haven't changed. The likeable cast doesn't hit us over the head, either – which isn't an easy task when Fiennes is playing a stunted, tough talking, of his time aristocrat more interested in his dogs. Beautiful pets though they are, matching the glorious estates, candles, delightful frocks, harpsichords, and divine interiors. The big hair and absurdly tall feathers, however, do look heavy and take getting used to – and one has to chuckle when one of those giant things catches fire! The recognizable Spencer connections and mismarketing may have hurt the film's reception, but comparing the history onscreen and off is quite interesting. This is a subdued, pretty well put together and surprising modern costume drama. But really, no wonder the tawdry always got out, they just talk about their juiciest scandals right in front of all the staff, maids, and footmen! Tsk tsk. 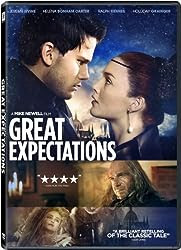 Great Expectations – Magwitch Ralph Fiennes (Voldemort), Miss Havisham Helena Bonham Carter (Bellatrix), and Mr. Jaggers Robbie Coltrane (Hagrid) go Dickens 2012 with Jeremy Irvine (War Horse), Holliday Grainger (The Borgias), Sally Hawkins (Happy-Go-Lucky), and Jason Flemyng (X-Men: First Class). The old time fog, bleak, and cold are felt here with threatening, dirty, up-close convict dangers and poor cruelty at home, creating a jarring juxtaposition against the potential for Christmas kindness and holding fast to doing what is right despite difficult times. Will we be rewarded at some time unknown or is there always one ready to deceive and take advantage of the goodhearted? People treat one differently when society raises him and we pretend to be something we are not. Would be lovely greenery and estates marred with decrepit cobwebs and decay accent the harsh nature and bitter nurture at play – although the chemistry between the young leads falls flat with repetitive dialogue and a Dickens-lite, Young Adult tone. Perhaps Bonham Carter seems too quirky as Miss Havisham thanks to her Burton associations, but her madcap, warped pain would be fitting if it wasn't presented as unevenly gothic and comical – the fire scene, I hate to say it, is laughable. Big, junky jewelry and ugly hairstyles are iffy, too. Brief CGI cityscapes and modern digital saturation are unnecessary compared to appropriately crowded London streets and cramped period interiors, the score is too generic, and flashbacks on Miss Havisham's marital cause and the Magwich back-story feel too...music video. The pace drags in time away from the elder cast, but these 2 hours move fast over the well known plot. There are better, fully envisioned adaptations – perhaps this release was simply too blink and you miss it soon after the 2011 television version – but the paired down style, elder ensemble performances, and the tough to beat story lend their appeal to contemporary eyes and a classroom discussion. 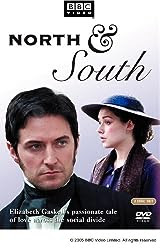 North and South – Not to be confused with the John Jakes Civil War epic, this four hour 2004 British adaptation of Elizabeth Gaskell’s novel stars Richard Armitage (The Hobbit), Brendan Coyle (Downton Abbey), and Daniela Denby-Ashe (EastEnders) as the headstrong Margaret Hall. She certainly puts her foot in her mouth a time or two, bangs up all the social protocols, and cluelessly meddles in strike business! It helps to know a bit about the titular backgrounds to understand this mix of snotty upscale and misplaced airs, but lovely mid nineteenth century costumes, candlelight, and green country balance the crowded bleak, gray, and shabby industrialism. The scale and ensemble may be small compared to more recent period spectacles, but the Dickensian highs, lows, and social divides are mirrored in the harsh wonder of machinery and unforgiving factory potential – there is no in between or reward for principles here. Armitage and his husky voice do well in toeing that line between tender business sense and hardworking experience, and his dilemmas over cotton fortunes won or lost, striking workers, and starving families feel more interesting than the sometimes melodramatic, dry, and superficial etiquette or proposal troubles for Margaret. I’m not an Austen lover nor an Armitage drooler and sometimes I wanted to slap Margaret when things here got too sappy! The will they or won’t they love hate romance feels somewhat misplaced against the soft Dickens labor plotlines – deaths, crime, and twists seem broad or not as deep and heavy as they should be. However, the pace moves quickly and there is plenty here for fans of the novel or cast to enjoy in social study or literary rediscovery.

Posted by Kristin Battestella at 4:02 AM