Yes, I am superstitious about the number, and 666 Park Avenue probably began with one foot in its 13 episode grave thanks to its polarizing name. Though flawed with an unclear theme and a rushed rectification, this 2012 limited run remains a frightfully fun marathon.

Although 666 Park Avenue is loosely based upon a book, the series ironically shares several similarities with the equally ill fated series The Gates, which aired two summers prior on ABC. Our new tenants move into a luxury, too good to be true apartment building, taking a working position in a community where their predecessor left under unusual circumstances. The ridiculously short credits also flash a lone title card before the listings scroll over the opening action, making who's a regular or who's merely recurring tough to deduce. Like The Gates, 666 Park Avenue also pads its short 42 minutes – or less – with unnecessary song montages, and despite a classy billionaire interracial couple at the top, diversity is lacking elsewhere. Does ABC keep repeating this formula hoping to get it right? The numerous writers and directors have no consistency for 666 Park Avenue, and the characters are their roles rather than truly bloomed personalities. The mismatched couples are unevenly developed and only seen hurrying home or leaving late. Some are in on the spooky while others are not, and most of the residents only interact for a hello or goodbye in the surprisingly tiny lobby. The Drake seems more like a hotel thanks to a weekly revolving door where regulars are left hanging for other going nowhere spooky. People are being sucked into the walls for goodness sake but 666 Park Avenue moves away from its scary core for irrelevant corporate schemes, Madoff name drops, and political double talk. Instead of sullying evil with the same old prime time hitmen or political assassinations, maybe not being so New York City steeped or having been period set may have let the building intrigue shine. The wicked blackmail in the second half of the series does better, but the ridiculous need to have an upscale party literally every other episode gets old fast. Truly, no one episode of 666 Park Avenue is all super, the audience never receives the answers we really want, and poor structuring muddles the quality paranormal pieces.

Fortunately, 666 Park Avenue is more spooky than nighttime soap opera with an adult cast, mature situations, desperate pleas, eerie phone calls, and mysterious contracts due. Thunder, spooky zooms, and ominous doors lead to residents with suspicious blood on their hands, petty thefts, and one creepy laundry room. The Pilot gets to the ghostly prospects early alongside deadly quid pro quo requests and a nefarious Order of Dragon past. This first hour feels like a decent haunted house movie, showcasing the eponymous elevator mishaps, spooky stairwells, and murderous flashbacks. Perhaps episode five “A Crowd of Demons” uses a Halloween party excuse too soon – we don't know the players enough to see them dressed up yet – but this is an atmospheric good time once the ghosts break loose. After an uneven first half, “Downward Spiral” begins to get to the bottom of The Drake only to have its reveals delayed until Show Nine “Hypnos.” Stock crashes, evil men in suits, sacrifices, and past rituals pepper the upscale where we least expect it. Play up those literal trips down memory lane, the mental hospital scares, bricked up fireplaces, and spooky books! “The Comfort of Death” toys with ghosts in the mirror and long lived curses while “Sins of the Fathers” adds priests and more 1927 living history coming back to rent an apartment. Reappearing pills taunt an addict, a knightly organization battles The Drake's Order of the Dragon – a lot of should have been there all along paranormal is tossed in too late along with a halfhearted evil topper in the “Lazarus” finale, and those dangerous bathtubs, past drownings, and bricked up bodies make viewers wonder why 666 Park Avenue wastes so much time on shopworn auxiliary in its early episodes. 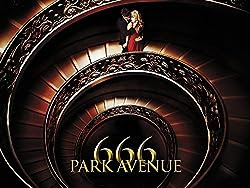 Where the eponymous complex's supernatural threats are quite interesting, our would be heroic couple Rachael Taylor (Jessica Jones) as Jane and Dave Annabel (Brothers & Sisters) as Henry are a touch too innocent, plain, and naive for 666 Park Avenue. They don't seem like much of a pair, just New York ambitious with lots of parties interfering while Jane's connection to the building – which should have been immediately solidified – is strung along until the seventh episode. There's generic architecture talk, but Jane merely breaks a few things and knocks down some walls in her haunted house reveals without finishing projects or following through on the top to bottom explorations. Eventually, it seems like the idea of Jane and Henry being building co-managers is dropped altogether, as the totally unaware of the paranormal Henry doesn't seem to care about Jane's pleas to move or her fear for her life until she goes missing and ends up in an institution. Of course, Jane has no right to complain about Henry's politics getting shady when she has been keeping secrets about The Drake the entire time, and these plots that should be powerful are erroneously intercut with weaker B and C stories. William Sadler (Death in Bill & Ted's Bogus Journey yes!) is great as Jane's estranged father, however, his horror heavyweight potential comes to 666 Park Avenue too late. Likewise, Henry's spooky dreams don't happen until the finale, as if the potluck writers simply forgot that Jane had the supernatural visions. It's not the actors' faults, nor the dozens of writers and directors who otherwise do fine work, but it seems like there was no character bible for this duo, leaving the audience anchorless to the very persons for whom we should cheer.

13th floor penthouse power couple Terry O'Quinn (Lost) and Vanessa Williams (Ugly Berry) certainly have the slick and suspicious afoot capabilities, but once again the mixed motivations on 666 Park Avenue hamper their scene chewing. At once, Olivia seems like a clueless fairy godmother lavishing on the newbies. However, one too many times she deus ex machina conveniently helps Gavin out of an evil jam before being unaware again by the next episode. Gavin, of course, threatens someone every hour to prove he is the top of the top, using politicians to get rid of mysterious rivals or swiftly dealing with dangerous minions. He knows all along about some secrets yet is blindsided by other evil trickery. If he's so powerful, why is his demonic brand such a slippery slope under constant threat? The rug is cut out from under the viewer when his evil hierarchy, past Order of the Dragon connections, and good versus evil religious aspects are never fully explained. 666 Park Avenue plays with pedestrian dirty politics too long, and I swear they literally pull a Seven from Married...with Children and send the Dorans' pointless daughter down the stairs to never be heard from again.

Sadly, I'm not sure the yuppie marital discourse of Robert Buckley's (One Tree Hill) struggling playwright Brian and his wife Mercedes Masohn (Fear the Walking Dead) as bitchy photographer Louise are necessary at all. Sure, they add bubble bath steamy and voyeurism, but oddly, 666 Park Avenue remains tame in the would be saucy affairs. Paranormal drug addictions and fatal attraction with Helena Mattsson (Betrayal) as Louise's assistant Alexis become completely uninvolved with the aforementioned characters' storylines, and although the gambling debts being tattooed onto Enrique Murciano (Without a Trace) as romantic Doctor Scott are a neat Karma twist, it never goes anywhere. The paranormal stamp on Brian's writing is late in the game to save the wishy washy between his women, and we don't know what's really going on with Alexis and her debt until Episode Ten. Rather than juggling too many superfluous paranormal residents and their wannabe The Devil's Advocate deals with Gavin and compromising the series, 666 Park Avenue should have combined these plots for just one strong younger couple, thus earning a second year to introduce some deadly love triangles.

But wait, there's more trite with the stereotypical magical negro psychic and rebel teen Samantha Logan (Teen Wolf) as Nona. Not only do redundant ghosts also impart similar mysterious warnings, but Nona doesn't always share what she knows, inexplicably leaving only the audience aware of the clairvoyance. Of course, Nona also has a magical negro grandmother in a wheelchair, and Ghost Guinan herself Whoopi Goldberg also makes an appearance as some kind of Matrix Oracle where, I hate to say it, she seems more like she's just talking on The View. Erik Palladino (ER) as doorman Tony is also treated as a subservient ethnic minority picked over for a higher position but used as a thug or handyman and deliveries as needed. 666 Park Avenue also has a black widow obsessed with youth, an obituary writer who changes people's lives with her pen, and two detectives snooping about The Drake. Well, one detective anyway – Teddy Sears (Masters of Sex) continues as another going nowhere side plot while his female black partner is never shown again. Typical.

Thankfully, symphony moments and ironic classic tunes add upscale accents to the blackmail and violence on 666 Park Avenue while creepy dream travels, phantom hallways, and hidden aspects of the building slowly reveal some sinister. It's frustrating when something spooky happens only to be cut away for an ominous commercial edit, but distorted wide lenses and through the keyhole photography add a sense of askew not found on your typical New York drama. The women's over-arched eyebrows give them a perpetual wow face, people researching their family history never bother to use ancestry.com, and some special effects look mighty poor. However, folks being sucked into the floor is pretty darn cool, and the 1920s styles make up for the contemporary lookalikes and lacking attention to detail. 666 Park Avenue has too many people, side politics interfere with the paranormal goods, and it takes half the thirteen episodes to really get going. The Drake's spooky promise is never fully refined, and the episodic dragging once again proves that network television needs to catch up with today's tightly paced shows and no time to waste storytelling. 666 Park Avenue should have been a taught 6 episodes rather than bloating itself with broad filler. Ironically, while improving on The Gates with its more spooky adult drama, these same pitfalls that shuttered The Gates condemns 666 Park Avenue.

It's annoying when such creepy potential and likable actors don't get the well thought out summer event series they deserve. Could have, should have – 666 Park Avenue is by no means great. Yet despite my negativity on the show's never quite hitting the right notes, it was indeed entertaining to marathon for the weekend, and 666 Park Avenue fits well for viewers new to horror, budding paranormal teens, or those looking for something upscale and spooky but light on fear.

Posted by Kristin Battestella at 3:58 AM