This contemporary quartet of movies and anthologies big and small provides plenty of quality murder, mayhem, paranoia, gore, and more. Your welcome. 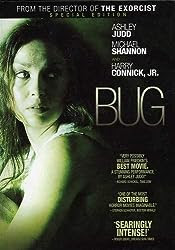 Bug – Retro telephone rings, an isolated and rundown motel, and blue neon lighting establish the would be rock bottom for beat up, lonely, straggly haired waitress Ashley Judd (Double Jeopardy) in this 2006 psychological scare directed by William Friedkin (The Exorcist). Unfortunately the solitary drinking, drug use, and one sided phone conversations become much worse thanks to the enigmatic and awkward Michael Shannon (Take Shelter) and his forthright perceptions on crickets and conspiracies. The smoke detector, a pizza delivery – even the disappearance of Agnes' son years prior is newly suspect. Violent, intrusive ex-husband Harry Connick Jr. (Copycat) is equally solid thanks to meaty one-on-one dialogues, masculine tensions, and terse back and forth exchanges. There's exposition, sure, but these conversations realistically rely more on past emotions and mistakes the characters already know. This is a messed up, small, and sad little world with more pronounced accents for the Oklahoma setting and a one room design that looks ten years older anchoring the dramatic first hour as the creepy crawlies, military history, and medical paranoia increase. Just because one can't see the infestations that doesn't mean they aren't there, right? People flipping out over bugs invisible to the audience can be unintentionally humorous, granted. However, the well edited camera cuts and movements within the tiny stage space ala the Tracy Letts (Killer Joe) source play accentuate the increasingly crazy theories and jumping to conclusions extremes – which are in turn ridiculous and unbelievable. Even if there is a grain of truth impetus and misplaced maternal instincts realized too late, sparse uses of bite marks, blood, plastics, tin foil, and bug lights – as in dozens of bug lights and wall to wall tin foil shiny – isolate our lead pair within their conspiracy together. The zapper glow adds a surreal, padded room reflection where homemade madness trades one type of abuse and insanity for another. Let's pull out our own teeth because the government put bugs in our fillings! Okay! This is not scare a minute slasher dicing horror as some viewers would expect but rather a freaky thinking person's examination of mind and body fears and inside and out delusions all done without CGI and $250 million hyperbole. As to the slightly confusing post credit clips, I suspect the first is where Agnes' mental breakdown began and the second is when her delusion passes the point of no return. Of course, I could be wrong, as it probably wasn't the smartest idea to watch this particular movie while I had a hives breakout!

Darknet – This 2013 Canadian anthology series jumps right into the First of Six half hour episodes with an internal website design, ominous subway obliviousness, and mysterious keys in a terminal locker leading to more clues. Our young and hip protagonists are often alone, in over their heads, and unaware they are horror subjects, and the seemingly random, intercut mini tales make it tough to grow attached whether our anonymous victims are in the played videos or surfing the visuals in real time. These aren't characters, just people being scared from scene to scene. Surveillance camera black and white accents the suspense and ironic toppers in each vignette, but the non-linear excuses only provide short term effectiveness. Through the keyhole views, police investigations, voyeurs, and saucy witnesses help rebuild tension in Episode Two, and bickering couples, incessant buzzing, faulty electricity, and erotic treasure maps don't lead to a happy ending. Whether the stories are creatively connected or not, the disjointed twists aren't necessarily crafty when the audience is duped into a confusing short attention span structure. Episode Three serves up eerie escorts, homeopathic pills, perilous jaywalking, and worse telephone repairmen – those tasers do come in handy! Despite the lack of logic needed to keep the shockers afloat, the storylines are quite quality along with the desperate prescriptions, kitchen hallucinations, and surgery fears of Show Four. Yes, be suspicious of house call doctors, cryptic contests, and fishy hotline calls! The isolation, blurred camerawork, and disembodied voices go well with the medical horrors, proving the plots here don't always have to be solely murderous. Cubicle ho hum and new town paranoia also do excellently in the full length story for Episode 5, using the alarming videos within an escalating tale for what ifs instead of the previous plot hole shockers. Ironically, the Finale goes back to hacker games and cheap sex thrills, weakening the killer tapping on the window simmer and turnabout is fair play surprises for a limp finish. A Season Two is in the works, and this kind of instant shock value fits its online Vimeo platform – where the over reliance on technology, messaging, social screens, and scrolling matches the current horror trends. Worse sex and violence can be found on the internet, however, and in five years, that technological steep will compromise all watch-ability. That's not to say the series isn't without promise, but its fleeting by design choices over brewing scares is only a fright fix memorable in small doses. Hopefully,the next batch will correct the kinks and notch up the fear. 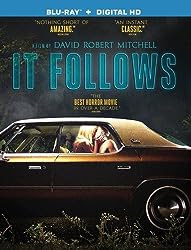 It Follows – A scantily clad girl running away in red high heels makes for a spooky start amid the rural, seemingly innocent Halloween leaves, sidewalks, and backyard pool safety here. The audience automatically suspects sexual violence – childhood fun and teen movie harmless quickly change to lipstick, pink lingerie, gruesome beach findings, and chloroform. Dating and sexual awakenings aren't so blissful, eh? Fortunately, the bathing suits and backseat panting aren't filmed for titillation. Outside of a few slow pans up a girl's bare legs to reflect what's on a guy's mind, the nudity here is for scares – the disheveled naked woman silently approaching and banging on the door allows the viewer to fill in our own saucy worst fears amid the middle America dated and downtrodden Michigan bleak. Old televisions, retro porn mags, and big station wagons with kids at the wheel add a nostalgia lost alongside the slightly eighties after school special music and Amityville lakeside scenery. Ice cream parlors, school halls, swing sets – this supernatural STD and sexual predator is everywhere with absentee parents, hospital visits, and assault evidence feeling bad but not really doing much about it, mirroring how our society both allows for the heartbreak whilst also saying she gets what she deserves for having sex. Oh, you consented, it will haunt you, but just get rid of it by passing it along. Sorry! We perpetuate a Little Red Riding Hood pursuit and sexualized too soon and then shame the victim with the Pilate need for water and a cleansing rain. Long hallways, locked doors, and Freudian disguises represent an abusive, festering trauma that all too often happens silent and unseen in these suburban locales where we least expect it. Of course, those friend zoned boys are willing to risk catching this crazy shit just for a chance at some vag! After all, it's for her own good, right? Do you prostitute yourself just to stave off the inevitable and allow the supernatural abuse and systematic robbing of our blissful youth? The horrifying answers are wisely left open to one's own interpretation, however the aquatic finale falters greatly. Again, perhaps having another eye for writer and director David Robert Mitchell might have strengthened some of the teen stupidity and invisible humorous – these kids fight before considering how to make it visible to attack. One character is completely useless – she is shot and no one cares – and although the clam shell meets birth control case design is smartly symbolic, this e-reader compact holding all the literary references is too on the nose, distracting from the otherwise fun old time horror allusions and general lack of modern technology. The absence of a research montage is also odd and no one looks into paranormal or religious cures, but shrewd pans and camera shots where the audience sees the titular approach when no one else does make for some scary moments. Like The Babadook, the real world horrors we aren't supposed to discuss are addressed without being preachy, and the social commentary amid the fears keeps the viewer doubly on edge. 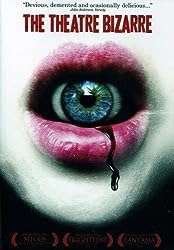 The Theatre Bizarre – Udo Kier (Shadow of the Vampire) is discomforting in his puppet makeup and makes for a bizarre animatronic host indeed for the “Theatre Guignol” frame story linking this 2011 anthology. Our First tale “The Mother of Toads” is self aware with Lovecraft references, croaking old ladies, reptilian rituals, and disturbing nudity – but the vacationing couple clichés may bore horror viewers expecting oomph. Tale Two “I Love You” escalates from a dramatic break up and bad sex to a painful look at two timing revelations and honest cruelties. Again, the violent reactions are predictable, but the distorted editing is a pleasing accent on the unabashedly R skin and splatter. The Third segment “Wet Dreams” offers a weird therapist, torture devices, and several creative varieties on every man's fear of uh... dismemberment. Dream analysis blurs the line between conscious moments or imagination, but that abstract also muddles some of the sympathy involved. “The Accident,” however, has pretty scenery, a little girl asking hefty questions, intercut motorcycle fatalities, and upsetting animal scenes. Why do we lie to comfort our children? While such somber may seem out of place here, this vignette isn't trying to scare but instead relay what is scary to us. Next, rapid life flashing before your eyes editing, back alley stupor, drug fixes, and eerie needles anchor the premise of “Vision Stains.” What if memory collection was within the eye itself? Should it be stolen in a dark violent high disguised as some sort of vigilante justice? The solitary narration makes the structure difficult, but that askew perception is also necessary to the storytelling. Gluttonous decadence, sex meets food sustenance, and avante garde orgies make for some fun fetish extremes for the finale “Sweets,” and director commentaries and lengthy interview features provide more insights. The overall tone, however, does seem sexist on both sides – male directors telling tales about bitches but those gals are apparently justified over such creep dudes. The balance isn't quite right, and if viewers are going to pick and choose their favorite segments individually, the concepts might have been nice to see in a new Tales from the Crypt style series instead. A lot here is too weird, derivative, and uneven thanks to the unique design, but there is still some choice horror entertainment, too.

Posted by Kristin Battestella at 4:56 AM