Indulge your cravings with this batch of elusive or obscure, foreign, and somewhat rare but mostly bloody good vampire pictures from decades yore. Blood and Roses – Mel Ferrer (Falcon Crest) leads this 1960 French/Italian Carmilla influenced production brimming with lovely outdoor locations and lookalike relatives mixing romance and Karnstein history. Though the currently gathered descendants scoff at vampire myths and stories of peasants taking stakes into their own hands centuries ago; familiar names, 500 year old Mircalla voiceovers, and a costume party in a ruined abbey add period piece mood to the modern suits, fifties frocks, and swanky cocktails for a slightly baroque blend. While not as lavish as the later Hammer pictures, this is indeed colorful thanks to quality titular motifs, white wedding dresses, and red fireworks. Peppering creepy words accent the smoke, crosses, tombs, heartbeats, and vampire spirits ready to possess anew. Mirrors, screams, and zooms make for some suspenseful moments – unseen vampire deceptions escalate over the discovery of bodies with neck wounds. However, there is a symbolic sensuality, implied saucy, and very Bava-esque pretty in the surreal, black and white dream sequence winking with water, sanitariums, naked mannequins, and nurses with bloody hands. It's a bittersweet, medieval feeling with all kinds of lesbian vampire shade, blonde versus brunette rivalries, and so close you want to be her Single White Female innuendo. Director Roger Vadim (Barbarella) certainly liked his statuesque blondes, and there are fine personality changes for his then wife Annette Stroyberg (also of Vadim's Les Liaisons dangereuses) as the bewitching, possessed Carmilla – she's minuet dancing, can't work the record player, and horses misbehave around her. Elsa Martinelli (Hatari!) is also divine in several portrait like stills paralleling Carmilla's feminine desire to be loved as much as her necessity for blood. Different edited or longer versions effect the plot here, but the dubbed 74 minute edition is currently available on Amazon Prime. While it won't be scary for modern audiences, this sophisticated and creepy but no less tender tale is impressive and worth seeing. 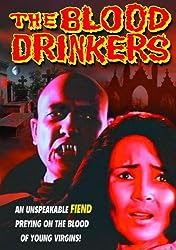 The Blood Drinkers – The full screen print of this dubbed 1966 Filipino production is somewhat flat, but the unique, cost cutting color schemes create a bizarre design of lavender and blue tints, red spotlights, and a silent film style patina. Smoke, funerary, capes, and crypts accent the time capsule East Indies architecture and style in an old world meets mid century macabre feeling. While the narration may seem dated or unnecessary now, the voiceover details the unique vampire myths and heart rituals assuring an undead return – thus helping in translation when the unpolished production values become confusing. The slightly annoying sci fi buzzing and hokey bat effects aren't too big a bother over the hour and a half, and hunchback servants, rapacious blood attacks, suggested nude victims, and predatory penetration create retro Gothic horror violence, twisted love, past scandals, and vampire pain. Evil old ladies, vampire brides, and eerie relatives coming back from the dead add to the open graves, parish assistance, religious relics, and an almost medieval Christian iconography. The action is well paced alongside rival suitors, vampire persuasions, and cemetery sieges, too. Sure, this is cheap and sappy at times, but the alternate Blood is the Color of Night title perhaps better represents the jealous vamp vixens, moral twists, and other now familiar vampire motifs – not to mention there's a fiery mob and chase finale! 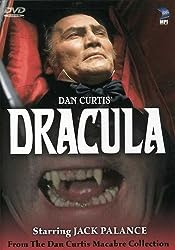 Dan Curtis' Dracula – After a perpetual Netflix save only, I finally found the uncensored version of this 1973 telemovie produced and directed by the eponymous Dark Shadows creator on Hulu. Once billed as Bram Stoker's Dracula, the historical Tepes connections and reincarnated romance also found in Coppola's 1992 edition seem to have their impetus here alongside more than a whiff of Dark Shadows in Robert Cobert's score. Wolf howls and carriages accent the outdoor filming, 1897 village, and European locations – leading to a creepy Borgo Pass and monstrous vampire brides for solicitor Harker. Though heavy on the seventies zooms, ominous epistles and past portraits build suspense before quick Demeter action, Victorian trains, and the idyllic English coast. With only Arthur Holmwood and no Renfield, writer Richard Matheson (The Twilight Zone) swiftly moves to Lucy sleepwalking, Dr. Van Helsing, garlic, blood, and stakings. Wolves are in this parlor with the spilling tea and fainting ladies! The big Civil War era gowns are earlier than truer turn of the century bustles, and though pretty, the English transition restarts the atmosphere, delaying away from Dracula. Despite Eastern European roots, Jack Palance (City Slickers) doesn't need any velcome talk thanks to his already deep, robust voice, and his chilling delivery of the familiar book lines adds to his suave facade. We know Dracula's lost love motivations, but thanks to Palance's hissing, rough desperation, the Count isn't too sympathetic. Whitby, Carfax, bites, crosses, boxes of earth – the investigation of such horrors escalates into a full on Transylvania pursuit. At times however, this does feel like a big budget Dark Shadows with the wrong cast of characters. It's not scary today and seems too derivative of other Dracula movies – perhaps because until recently, this version was somewhat sequestered while we watched all the others. Fortunately, the story moves fast, with superfluous players and book events excised for a straightforward Stoker summation. I'm glad this kind of Victorian Gothic is coming back into vogue, and the abbreviated plot, eerie atmosphere, and fine performances here are a great introduction to the genre. 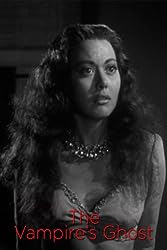 The Vampire's Ghost – Writer Leigh Brackett (The Big Sleep) adapted this hour long 1945 black and white tale loosely from the Polidori source, however an unfortunate narration warning of a dark land of voodoo and jungle evils sets the scene with stereotypical forties film racism. Cliché tribal drums, primitive English speaketh, and a witch cult village are apparently worse than a restless 400-year-old vampire prowler because this superstitious, medieval tomfoolery is interfering with native worker output on the big white man's plantation. It's uncomfortable to see such subservient mentalities, for locals aren't allowed to solve their own village vampire problem and must follow the mistaken white doctor or minister – who's entire dialogue consists of Hayes Code souls and redemption shoehorn. Some may argue the dance scene is unnecessary as well, but Adele Mara (Wake of the Red Witch) is lovely and it is a good dance! Is the suave, sunglasses wearing, bar owner John Abbott (The Woman in White) our vampire? Of course he happens to have the same name as one of his Spanish Armada ancestors! There are some unique pieces of undead lore here, such as small boxes of home soil under the pillow and restorative moonlight properties. Though short and fast moving, seedy gambling scenes and barroom brawl action are also fun alongside would-be sympathetic vampire revelations. The villainy is good, as are the shadows, suspense, hypnosis, and seductive kills with dames caught in the middle. However, the mirrors, safari style, and weird innuendos are more bemusing than scary. The potential for a fun little hour is here, but it is tough to overlook the racist plot points when it feels like half the picture and most of the actual vampness are unfortunately absent.

Posted by Kristin Battestella at 11:37 AM