Old and recent, foreign or domestic – this viewing quartet is a healthy dose of solitary moms, virgins, co-eds, and tough ladies single-handedly facing the scares.

Goodnight Mommy – Lullabies and divine outdoor locations quickly turn ominous with dark caves, deep lakes, nearby cemeteries, and underground tombs accenting this 2014 Austrian psychological scare featuring twin boys and a mother under wraps. Despite the bunk beds, wise viewers will of course immediately wonder if there are really two sons – one always hides or jumps out while the other calls, and their mother only acknowledges one boy amid talk of an accident and a separation. Mirrors, windows, blurred portraits, and odd artwork embellish their cool mod home, and eerie visuals heighten the freaky surgery bandages, prying peering, twisted dreams, and creepy bugs. Close the blinds, no visitors, total quiet – the twins become increasingly suspicious when such strict recovery rules and more unusual behaviors don't compare to sing-a-longs and loving tapes made pre-surgery. Naturally, English audiences have to pay attention due to the German dialogue and subtitles, however viewers must also watch for silent moments and visual clues as this TV host mom's obsession with her surgery results increases and the boys' talking back turns into some rough encounters. The sons research videos online and find strange photos while hidden baby monitors and timer tick tocks up the suspense. Who's right? Who's overreacting? What if we could see things from the opposite point of view? They want proof she is their mother and contact the local priest, but these seemingly innocent boys play some gruesome games, too. The situation becomes more and more claustrophobic, becoming trapped indoors and locked in one room with homemade defenses and cringe-worthy torture done with something as simple as the magnify glass with sunlight trick. The audience is swayed with evidence one way before being presented with new unreliability, familial violence, and pyromaniac tendencies in a fiery topper. At times, this feels more like a sad drama than a horror movie and some elements might have needed a bit more clarification. However, the horrible stuff herein and debating on the what ifs lasts long after the viewing, and this is a fine isolated tale using slight of hand power of suggestion for its slow burn unraveling.

The House of the Devil – Creepy menus, cult statistics, and retro credits start this 2009 blu-ray featuring Jocelin Donahue (The Burrowers), Dee Wallace (The Howling), and Mary Woronov (Death Race 2000). Payphones, eighties rhythms, and old fashioned style add period flair alongside onscreen smoking, maps, feathered hair, and a big old cabinet television showing Night of the Living Dead. Even the giant Walkman and slightly corny music montage and dance about the house has a purpose in the narrative. Church bells, cemeteries, and an imminent eclipse lay the scary foundation, and rather than an opening scare fake-out, writer/director/editor Ti West (The Innkeepers) uses zooms and movement within the camera frame to create viewer intimacy, closing in from the chilly exterior and ominous windows as the suspicious phone calls lead to desperate babysitting jobs, desolate night drives, and a maze-like Victorian manor. Yes, our Samantha is at times very dumb and unaware she is in a horror movies thanks to plot holes a collaborator not wearing so many behind the scenes hats could have clarified. Mistakes and convenient contrivances in the somewhat tacked on final act also break the solitary point of view for the audience's benefit. However, that finale free for all with ritual candles, hooded robes, and a sudden twist ending is in the seventies splatter spirit, and the simmering, silent build happens naturally over the film. Instead of hollow thrills a minute, the viewer is allowed time to suspect the scary attic, theorize on suspicious photos, and listen for every noise – we know something is supposed to happen but not when. Though this kind of approach may seem boring to some, this innate alone trickle let's us appreciate the dark basement and the inopportune power outage for when the titular frights do happen. It's nice to have something different from the mainstream horror trite, too – not to mention an $8 pizza! 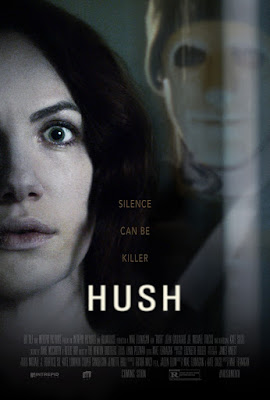 Hush – Writer and director Mike Flanagan (Oculus, Absentia) and his wife, co-writer, and star Kate Siegel place our deaf-mute author in a pleasant forest cabin for some writing, relaxation, and terror in this 2016 eighty minute Netflix original. Comfort cooking noise fades and unheard laptop tones switch to wild kitchen alarms – immediately establishing the common sounds taken for granted alongside subtitled Sign Language, feeling vibrations for sound, and hearing an author voice in your head brainstorms. Friends speak while they sign, breaking up the quiet for the viewer, and we must pay attention to writing onscreen such as book jackets and manuscript text. Understandably, phone technology and Facetime calls are important, but an over-reliance on gadgets in horror can be tiring and soon dated with wi-fi switches, lost connections, and cut power. Fortunately, the intimate home makes the audience accustomed to the hearing challenges before adding the muffled silence, unseen scares, unheard screams, and instant cyberstalking. Through windows or foreground focus and background action, we have the full perspective when the protagonist doesn't. It is however a mistake to reveal the crossbow and Bowie knife wielding stalker so completely. We don't need to know the sociopath motivation nor should the viewer feel for the killer or care if he has any personality, and removing his mask just creates limp assholery. The frightening unknown with footstep vibrations, hands at the window, and approaching shadows creates a better siege, and the mystery of who and why is lost in the contrived lulls and stupid mistakes while Maddie waits around for his taunts instead of fighting back. Why not set something on fire, smoke signal authorities? Having her inner monologue address the situation and the pros or cons in each course of action is also better than breaking Maddie's point of view and using fake out possibilities. Although it's a pity millennial viewers wouldn't watch something that was all silent, the long periods with no dialogue, sound effects, and score crescendos do just fine in accenting these unique dynamics. While not perfect, this tale has enough thriller tense and innate woman alone in peril – and thus proves exactly why I must know where all the windows, entrances, and exits are in a given location and never sit with my back to any of them!

A Virgin Among the Living Dead – Various versions of this 1971 French/Spanish co-production exist thanks to re-releases of Jesus Franco's (The Awful Doctor Orloff) edition and added zombie footage from director Jean Rollin (Fascination). The trying to be poetic narration is unnecessary, the subtitles are off, and the dubbing is out of sync with the serious close ups. A dockside tense and snotty hotel warnings don't bode well for the boobies and little white panties revealing an obvious brown carpet not matching the blonde drapes, either. Askew angles, empty rooms, and creepy statues make this secluded villa Old World eerie – kind of like the mid-century Gothic look my parents' house had when I was a kid with big, foreboding lamps, tall, arched mirrors, and The Man with the Golden Helmet above an orange settee. Yes, I now realize this probably explains a lot about my interest in horror. (That and being forced to wear pink and bows but that is another story.) A happy nature stroll can't compete with demented music and deathbed vigils, and townsfolk suggestions to run, abandoned chapels, and prayer recitations are ignored in favor of this freaky family's casual views on death. Distorted camerawork accentuates weird eyes, facial oddities, and ritual pursuits as flies and buzzing sounds increase. From voyeuristic geezers and bats on the bed to a giant dildo on the floor and a blind chick getting her seventies bush trimmed by another girl sucking on her bloody boob – it's time to get out of Dodge. Unfortunately, the inconsistent characters and forgetful, stalling plot are very thin with potential psychic connections unclear and a running in circles, going nowhere fast pace. Intercut zooms while everyone squints over the reading of the will feels Charlie Brown wah-wah, and nothing comes of possible sexual awakenings, suicides, and daughters paying for sins of the father themes. There were no zombies in the version I saw – I'm not even sure which version it was. However, the muddled onscreen reflects the messy behind the scenes intrusions, and the overall result is not as good as it could have been. Fortunately, this isn't super bad, and Franco enthusiasts will find many bemusing aspects alongside the saucy violence and undead foretellings.

Posted by Kristin Battestella at 1:27 AM