Who knew New York was so ripe with vampire frights, funnies, and mayhem? These comedies old and new have something saucy, humorous, or sassy for everyone.

Vampire in Brooklyn – Lonely vampire Eddie Murphy wants Angela Bassett (Black Panther) as his willing bride in director Wes Craven's 1995 horror comedy opening with talk of ancient Nosferatu out of Egypt feasting on those lost in the Bermuda Triangle until vampire hunters brought the undead to extinction. Now that's a backstory I'd like to have seen! Foggy harbors, bloody bodies, and a scary wolf invoke Dracula while black and white televisions, hard language, and R attitudes provide refreshing throwback humor. Leaps in the air, breaking through the windows stunts, an unnecessarily elaborate ship crash set piece, and poor visual effects cement the nineties tone, but the Blacula references, monster transformations, no reflections, and itchy gunshots add tongue in cheek to the vampire fangs, pointy nails, and eerie eyes. That wig, though, wolf! The full moon, day servant ghouls a la Renfield, and a heart ripped out of the chest bring the vampy to the street as horoscope warnings, chases, and gore set off the urban creepy afoot. Viewers expect a camp aside or pithy comeback in every scene, but the witty matches the serious horror thanks to little things like, oh say, an ear found at the crime scene that serves both laughter and atmosphere. Increasing ghoul mishaps, “RIP” license plates on the smooth ride, and “Whatta Man” montages set off the dangerous coffin retrievals, but faith versus snakes and vampire lore in a murder investigation are too unbelievable for our tough cops to consider. Unfortunately, the apparently obligatory Murphy disguises are totally out of place. Awkward preacher fakery ruins the vampire build up before another offensive Italian stunt, and the makeup for both is terrible. The evil is good allure could have been better presented with vampire suave rather than dragging the film down with overlong laugh out loud send ups that make viewers wonder where all this is supposed to be going. Why torment this strong woman via stupid delays when you can just charm her instead? The blood pulsing temptations, supernatural flirtations, nightmare paintings, love triangles, and saucy roommates come to a complete stop as if the movie must rely on Murphy's retreads from Coming to America. Excellent “I would love to have you for dinner” winks, sexy bites, and a simmering score better accent character dilemmas over eternal life, predatory pursuits, and rough seductions. Horror attacks, candles, and juicy vamp outs lead to serious character decisions and tense one on one revelations before a wild finale with a fitting chuckle. I'd have loved a sequel with ghoul turned cool Julius Jones! This is oddly similar to Craven's Dracula 2000 in several ways, and there are many flawed elements here – pointless narration, meandering focus between the humor and scares, datedness, and uneven try hard that wants to be both niche for Black audiences yet mainstream hit acceptable. Fortunately, overall the late night fun here is still entertaining; a great re-watch with mature, modern vampire chemistry. 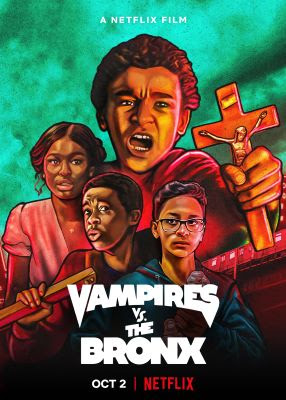 Vampires vs. the Bronx – Sirens, flickering neon signs, new construction buyouts by Murnau Properties, and paperwork sealed with fangs and screams open this PG-13 2020 Netflix original. Suave tunes, multiple languages, and cultural blends set off the summer heat, bicycles, and friendly neighborhood bodega, but missing persons fliers, Vlad the Impaler logos, and Polidori references provide ominous. Adult gravitas anchors the youthful ensemble, but the realistic kids aren't trying hard for the camera. These boys just want to impress the older girls but end up embarrassed by mom wanting to get a babysitter. Narrations and video angles a la Tik Tok balance church bells and scripture quotes, developing the locales and characters well as the youths face local gang pressure to do things they don't want to do. The new white woman in town insists she isn't one of those types who will call the cops, and the genre mirror to nature commentary is superb. It's not the hood the kids fear, but the nasty white folks who've come to suck the life out of town. Vampire vows to wipe them out like vermin are all the more chilling because we recognize the gentrification and racist mentalities. What would the authorities care if vampires are pecking bad guys off the street in the Bronx? A wealthy white man writes a check so no one notices those made to disappear, and such a forgotten, downtrodden place is perfect for vampires who want to stay under cover. Friendships are tested when some want to do good for their community and others are right to be wary. Neighbors disbelieve the hear tell vamps dressed like Hamilton taking out the local thugs while humor alleviates suspenseful close calls – the vampire was just coming in to buy...sanitizer of course. Daytime nest explorations and homages to The Lost Boys accent the self aware genre winks while a bemusing montage establishes the lore herein complete with that cookie they hand out at church that doesn't taste very good aka the “ukarist” and watching Blade. Single mothers try to keep their kids on the up, but the boys are trespassing for vampire proof and stealing holy water in a Sprite bottle. Skeleton keys, coffins, ringtones rousing the dead – what's worse then being chased by vampires and caught in the backseat of the cop car? When their mothers come to get them but the vampire didn't show up on your camera. Fun zooms for youthful actions and watchful eyes match creepy red lights, growls, and hypnotic kills as Haitian history preparations and shootouts don't stop the undead. The kids take the crucifix off the wall and hope tia doesn't notice, but the powdered garlic comes in handy and calling the Bronx a shithole is the last straw. Although a little short at under eighty-five minutes with credits, the swift solidarity doesn't stray from its goal. Rather than underestimate the audience with stereotypical obnoxiousness, this refreshing contemporary take is great for young audiences as well as fans of wise and wise cracking horror.

Not as Good as It Could Be


Vamps – Alicia Silverstone (Clueless), Krysten Ritter (Jessica Jones), Dan Stevens (Downton Abbey), Wallace Shawn (The Princess Bride), and more familiar faces star in writer and director Amy Heckerling's (Fast Times at Ridgemont High) 2012 vampire comedy opening with whimsical period artwork and humorous explanations on the blood sucking process. Our darling vamp Goody was excited about the eighties – the 1880s thanks to electricity – and she relates to ageless silver screen stars before her loneliness is mended by new bestie vamp of the nineties Stacy, who teaches Goody about Napster and going to college. Hometown soil, needing a stem vampire to make new ones, drinking rats with straws, and more important vampire lore comes fast and loose in busy clubbing scenes, and putting on lipstick without a mirror, drinking the pizza guy, vampires preferring the term ELF for extended life form, and goth night on the town are cute but aimless fillers with flat dead pans as the quirky tries much too hard. Van Helsing works for Homeland Security, Malcolm McDowell (A Clockwork Orange) leads the Sanguines Anonymous meetings as 362 years clean knitter Vlad Tepish, and undead is not unfeeling mantras are much better, and the eponymous girls feel like the wrong point of view for the old versus next generation clashing about not drinking people or dating the dead. Tanning salon mishaps become brown face wrongs amid other inappropriate slang, leaving the social parallels and garlic gags that should be funny off the mark. Self-referential vampire hunters disguised as cable men are far more humorous, and Sigourney Weaver (Alien) is delightful as the sassy cougar vamp who doesn't care about the daylight savings accidents, jury duty, and in the system persecutions affecting the vampire community. She objects to not understanding youth because she's been young for so long, and the elder cast sending up the vampire tropes is superior to the trying to conform hipness. Commentaries on intrusive government and technology jar with funny sex scenes juxtaposed with tender moments and mixed messages on following the trends instead of being yourself. Montages gloss over interesting vampire/human relationships, and between the romance love and lost, opposites attract, and the vamps adapting to the modern world; it's tough to tell what the plot is. Predictable kill the stem vampire plans, pregnancies, cancer patients, and humanity fixes add more unevenness before a convenient eclipse resolves the vampire dilemmas with delete file and recycle bin clicks. By time the vampires unite with Van Helsing and get serious with one on one confrontations and bittersweet longevity, it feels out of place when it should have been the focus. This could have been really charming, but it's seems content to be very of its time, though younger audiences won't get the ragtime references and the special effects are downright terrible. While cute for bubble gum goths or younger horror lite fans, viewers looking for a shrewd vampire comedy will find this lacking.

Posted by Kristin Battestella at 12:44 PM