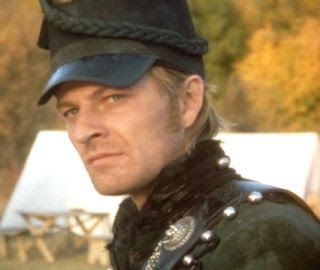 Since I’m reading Sharpe’s Eagle, allow me to skip the novel’s film adaptation-the second in the Sharpe series-and continue with the third installment, Sharpe’s Company. Sean Bean returns in this 1994 telefilm as Richard Sharpe, a Captain raised from the ranks by during the Napoleonic Wars. 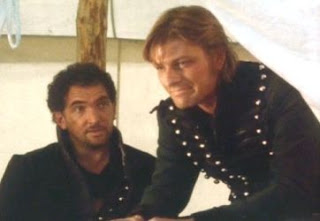 Sharpe’s Company opens with Sharpe being demoted to a menial Lieutenant after lesser men have bought commissions above him. Separated from Sergeant Harper (Daragh O’Malley) and the rest of the Chosen Men of the 95th Rifles, Sharpe faces off against an enemy from his past, Sergeant Obadiah Hakeswill (Pete Postlethwaite). Hakeswill is a rapist and a thief who was hanged once before, but did not die. Sharpe was flogged because of him, and Hakeswill vows to claim Sharpe’s lover Teresa (Assumpta Serna) for his own. Sharpe can only reclaim his promotion on the battlefield, and he must claim victory to save Teresa and their daughter Antonia from the vile Hakeswill.

The regular cast in Sharpe’s Company has grown into their characters just fine. Serna is again lovely as the guerilla leader Teresa Moreno. Daragh O’Malley is perfect as the ever faithful Harper, but newcomer Pete Postlethwaite steals the show as the sleezy Sergeant Hakeswill. His look, the twitches, his dialogue sells every creepy thing about his character. As much as we love Sharpe for Sharpe, you really want him to get his vengeance on Hakeswill because you can’t stand the slime. 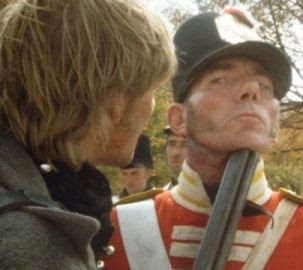 Kudos also to the titular Sean Bean. Sharpe’s Company isn’t meant to be too deep or serious, but Bean gives another dimension to Sharpe here. He wants to save the daughter he’s never seen, but he’s also willing to die for his King. I have to admit; sometimes I can’t keep track of who all the new boys are as they come and go. It’s like the red shirts in Star Trek. When a new Lieutenant or Captain makes his appearance-whether he hates Sharpe of befriends him-he usually ends up dead.

These passing characters coming or going from author Bernard Cornwell’s canon don’t deter from the story in Sharpe’s Company. In fact, Company is one of the better episodes in the series. Big historical battles are fully explained and in the proper context here, in the midst of Sharpe’s personal dilemmas. His family, his vengeance, his zest for promotion and the conflicts with superiors who are all show-Sharpe’s Company twists all these together in a pretty end. And just think-there’s plenty more Sharpe to be had in the next film, Sharpe’s Enemy. 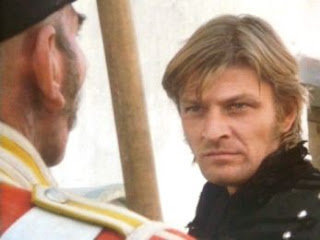 Director Tom Clegg and his production team get the battle sequences down pat for Sharpe’s Company. Despite all the nighttime action, things are well lit, choreographed and edited properly- you know what the heck is going on without being a Napoleonic historian. The hit and miss electric guitar music is still there, but the rousing score during the battle of adds to the valiance onscreen.

It’s not a big deal, but the credits and the look of the series is slightly better in Sharpe’s Company than previous episodes. It’s not explained which is understandable. The cast is another year older and all, but the little changes in titles, score, and cast continue throughout the series. This is where some behind the scenes features would be really wonderful, but alas again there are no extras or subtitles. The digital transfer is also imperfect, but should these nitpicks turn one away from Sharpe? Surely not. 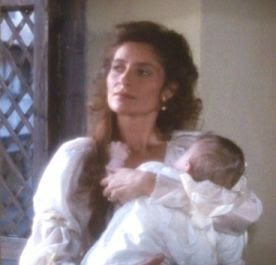 Sharpe’s Company is one of the highlights on the series. Depth and villainy beyond Napoleon are introduced. The epic is there as well as the personal. You need not see Sharpe’s Eagle to enjoy Company, but after this one, how could you not want to see Sharpe’s Enemy?

Check your online retailer for Sharpe dvds-individually or as a box set. Kids might shy from the romancey aspects, but there’s enough story and action for the boys. Young and old viewers can enjoy Sharpe’s Company. 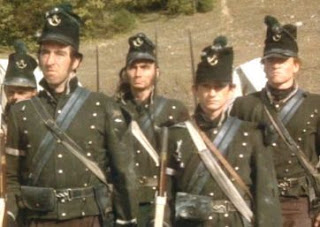 ETA: Please check the comments for further analysis on the Sharpe's Company novel.


Posted by Kristin Battestella at 7:10 PM

Since I’ve already reviewed the television adaptation on Sharpe’s Company, I’ll only briefly give my praise for the Bernard Cornwell novel.

The film adaptation keeps true to the written word, but the battle scenes on the page are much more detailed and complex. Cornwell finds historical niches for Richard Sharpe to appear, and the siege of Badajoz is lengthy, rough, deadly, and dirty. Several failed siege attempts are also in the book-unlike the film-raising the stakes for Sharpe-who of course has to deal with army politics, enemies within, and the rescue of his wife and daughter.

Sergeant Obadiah Hakeswill makes just as much trouble for the written Sharpe as he does onscreen. It’s morbidly delightful to read the twisted thoughts of this madman, and Pete Postlehwaite does a fine job of bringing the character to the screen. Of course, on film characters are dropped or combined and dismissed, but in the Sharpe’s Company novel, all the supporting officers and soldiers are given plenty of time to develop themselves and their relationship to Sharpe. Hard core friendships and army loyalty between Harper and Sharpe are almost more of a delight to read than see.

Historical fans will love any Sharpe novel. I’m not really reading them in order, more as I find them, but it’s easy to jump into the series-especially for Hornblower fans. As realistic as C.S. Forester’s books are on naval warfare, Sharpe is their equal on the battlefield. The British-ness may take a few folks some getting used to, but Sharpe’s Company is well worth the journey.