Has My Spirit Flown?
by Kristin Battestella

I know I say there are some albums I don’t really like or songs I can take or leave, but honestly one album I truly split on is everyone else’s ever popular Spirits Having Flown. This 1979 follow up to Fever proved Barry, Robin, and Maurice’s “comeback” wasn’t just a flash in the “disco” pan. The Gibbs continued to make and break the charts with Spirits.

Tragedy is one of the few songs my non-Gibb honey likes. It's synthesizers, progressive sound, and basic lyrics set the song and album off and running. The Bee Gees have a knack for having heavy production and over the top music compared with simplistic lyrics. When you're alone its a tragedy, duh. A chart topper naturally. It has explosions, need I say more?

If there is such a thing as a more global monster hit then Tragedy it has to be Too Much Heaven. The Brothers got in touch with their spiritual sides lyrically and donated the proceeds from the single to UNICEF. This album is all about production production production. When you break it down, Heaven's nothing more than the Brothers sweet lyrics and harmonies. Take for example the Boys’ live renditions, just them and a guitar is equally spectacular. However, the layering and dubs and over-the-top falsetto makes Heaven so grand and universal.

Love You Inside Out was the third charter from the Spirits album and this one might be my favorite. The falsetto is a little bit softer, so you can sing along! The raunch factor of the lyrics is evident (even though the original lyrics had to be changed because the suits feared they were too nasty). >80p I especially enjoy the rhythm and beat changes in this one. You can dance, nudge, and wink, awl yeah! (Someone just remade this. Fiest, Feast. Something like that.)

Reaching Out is the second slow jam presented. The lyrics are slightly more delicate, but Barry’s high notes crescendo at the end. Although any Barry fan would naturally love this album, and all his styles are represented here, one of the things I don’t like about Spirits is the ‘Barry featuring Robin and Maurice’ feel. As usual the best parts of the album are choruses and harmony. The echoes and ad-libs here make Reaching Out.

The title track Spirits (Having Flown) (Parenthesis!) has its moments. It’s tropical feel is indicative to the rest of the tracks, and Spirits’ bongos and grass skirts style is contagious. The falsetto is much easier here, and the general listen is a pleasant departure. I love it when the boys just ‘lalala’. 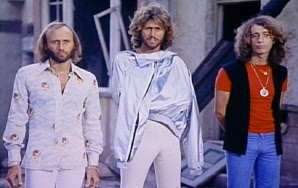 Search Find, however, is loud and over the top. I usually leave rather than take this song. The music is very powerful and catchy, but the lyrics are too high and too fast for me to enjoy. When I finally read and understood the lyrics, I found I actually don’t like them. Go fig.

Another leaver is Stop (Think Again). (I never want to see another parenthesis!) Again the music is very sweet and bluesy, but Barry is too into the falsetto. The choruses where there is a touch of harmony and soul make the song tolerable. The Bee Gees falsetto harmony is impeccable, and no one else can do it. The second half of Spirits really doesn’t showcase this as well as the hits.

Having Spirits on record is a real pain. I've got to skip all over the place to hear Living Together and I'm Satisfied. Living Together is the one song that it seems Robin sings the verses. His falsetto is slightly different, and you can understand what he’s saying. When combined with the booming brass music and lower chorus lines, we get a unique delivery. It is as if the voices are competing here, the opposites that aren’t living together. Yet the high falsetto has balance now with the lower octaves. It’s so good when the arrangement parallels the story being told.

I’m Satisfied returns to the tropical feel, but it’s more over the top that Spirits. It’s lyrics are twisted and high, but you can’t help but sing along and dance. Happy go lucky is how I would describe this one. The boys appear to be just having some fun. One odd thing about Spirits. There is no ’nasty’ song. Each song has a line or two or three about some good loving. Maybe that’s why parts are so fun and addictive.

I really don’t know how Until got on this album. There is an odd demo called In The Heat of the Night that feels better suited, and Until ends this rather fun, lively, and upbeat album on a slow down note. I’m Satisfied is a much better book end to Tragedy. Nevertheless, Until is the longest two minutes I know. I absolutely adore the way Barry can manipulate words, but every other word is unnecessarily slowed on Until. I listen for about thirty seconds then I’m just bored and itching for a pick up in the song that unfortunately doesn’t come.

Spirits Having Flown’s unique blend of softness and over the top noise and production is not for everyone. However, almost by necessity, the Brothers had to jump the gun in order to top the Fever Monster. The result is The Bee Gees best selling non soundtrack album. When you think of it that way, my take it or leave it opinion doesn’t really matter, does it? ;0)
Posted by Kristin Battestella at 5:58 PM