Andy Was A Jolly Good Chap!
by Kristin Battestella

An Andy LP review! Although a greatest hits album after only three releases usually spells doom for any musician (and in retrospect was no different for Andy Gibb) Andy Gibb’s Greatest Hits, released in 1980, does indeed represent the best of his career. While I praise Flowing Rivers, it does have the introductory album feel, and with Shadow Dancing and After Dark, sometimes I have to ask myself, “Where’s Andy?” Andy’s Greatest Hits is indeed his one complete album. 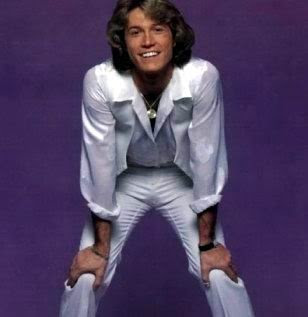 I Just Want To Be Your Everything is such a keeper. (We reviewed this song in detail for Flowing Rivers here.) This song put Andy on the map, and Barry’s lyrics just say what needs to be said. It’s such simple genius. Andy rings so true when singing about penne ultimate love, in a word it’s everything. Love Is Thicker than Water (also on our FR review) cemented Andy’s quick rise to fame and has an easy humming guitar break at the end. Sweetness.

Recently I have discovered Shadow Dancing is a great sing along song for the car. The only recorded song written by all four brothers, sometimes I fancy you can hear all four on the song, and if this is what all the Gibb boys would have sounded like together, wow.

An Everlasting Love seals Andy’s title as the Love Prince. Another great sing a long song written by Barry that is just so happy and blissful and true. Once I get the tears out of my eyes from Our Love Don’t Throw It All Away, I’m left with one question. Why didn’t Blue Weaver write more? This song is unique in that it symbolizes Both Andy and his brothers independently of each other. Many fans adore this Andy sung tear jerker, and The Bee Gees performed the song with his recording in many live tributes. This is one of those songs that just says everything exactly how you mean to say what you mean, but can’t. Once I was having trouble reaching a kid I was teaching in church. I began saying, “Maybe I don’t want to know the reason why,” I was like, damn Gibbness is good.

Perhaps the one downfall of this album is that it showcases the commercial and popular Andy. The Andy that didn’t write his own songs and didn’t sing without his brothers or at least their input or production. I’m no psycho analyst, but many theorize this almost Norma Jean (country without his brothers) versus Marilyn (creme de la creme with his brothers) complex was what lead Andy into substance abuse. This is not the same young idealist heartfelt country songwriter that we hear on Flowing Rivers. This is a great psychological study, but for now it suffices to say I do like both Andys, for what it’s worth. :0)

Allow me if you will to also mention All I Have To Do Is Dream. This cover was released by Andy Gibb and Victoria Principal about this time. It’s alright for Ms. Bobby Ewing I suppose, but again listeners of the day felt Andy could not stand without anyone around him, especially his brothers. And just when that old argument comes up again, something amazing happens. Side Two does give us the Andy of old!

Time Is Time was written by Andy and Barry and has a renewed sound for both. It’s got a nice happy rhythm and groove to it, just the way I like it. Me Without You is the lone track here written by just Andy and does the complete opposite of Time. Me Without You is soulful and heartfelt, and even when Andy cracks a bit in the song, it just fits the mellow mood. A totally beautiful and lovely song in its own right.

Who honestly is Pat Arnold? I didn’t even know she was a she until I heard her sing Will You Still Love Me Tomorrow here with Andy. I had to read up to find out she is the same P P Arnold that worked with the brothers before, and I still don‘t know who she is. This is one of those songs that is so great and real and true, that it can’t really be done wrong. Nothing will ever, ever compare to the Shirelles version, but hey, our team here makes a sing-along-able go at it.

As per Gibb tradition, After Dark is the record’s kinky track. There’s something about the way Andy delivers the husky chorus. Although written by Barry, Andy does his own breathy twist that I often find stuck in my head. The lyrics and delivery are just that sexy! Desire is a sweet little song, but for me it ends the album on a bittersweet note. We’ve full-fledgly returned to Andy merely echoing his brothers on their own track. It makes for a dang good song, but again with Andy I wonder what could have been.

Andy Gibb’s Greatest Hits I’ve found out can be a very thought provoking album with much more depth than Andy is given credit for. Maybe that is do to the tragedy of his life, I don’t know. Still, I recommend this lp for its sing along We Are The 70s! dance ability. After all, we listen to these boys to dance our cares away, don’t we?

Posted by Kristin Battestella at 1:12 PM