Just when you thought I was through talking about the British Napoleonic series Sharpe, I present the fourth episode for review. 1994’s Sharpe’s Enemy continues the superior levels established in the previous telefilms. Revenge, damsels in distress, war politics, and rapacious villainy- Enemy has it all. 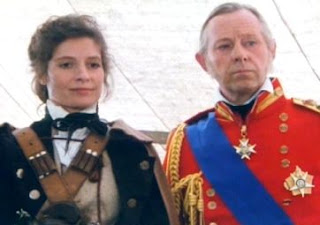 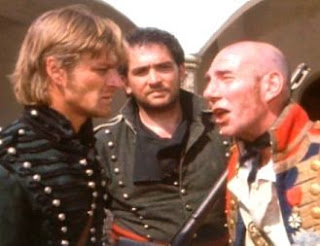 We may think of it as stunt casting now, but I don’t think Elizabeth Hurley was as big then as she is now. Naturally, she’s only here for her buxom self, but it’s easy to jump on board with the young wife lusting after Sharpe. Pete Postlethwaite is again delightfully creepy as Hakeswill. He’s slick and twisted, and as much as the gals may think Sharpe dreamy, Hakeswill is probably a more realistic notion of how crusty soldiers really behaved. Assumpta Serna is again wonderful as Teresa Moreno-she is the most developed, confident, and likeable of all the women in the series. And of course, Daragh O’Malley is the ever faithful Harper. 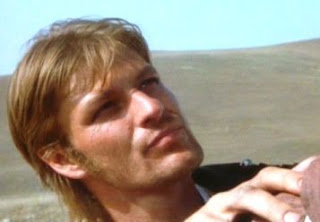 Perhaps the storylines in Sharpe’s Enemy work well because they hail from Bernard Cornwell’s novel, but the plot begins after the events of Sharpe’s Company. You don’t have to watch one to understand the other, but Enemy weaves a complete tale when most sequels stretch material too thin. In the scope of the war with Napoleon, Sharpe’s Enemy is small-focusing rather on personal and private battles. Sharpe again has to sit back while foolish and rich gentleman move above him. He must indulge them while dealing with Hakeswill. Sharpe, unfortunately, pays the ultimate price. Major Ducos enters the picture as the vile ear of Napoleon-a not so subtle reminder that this is really supposed to be the English versus the French. 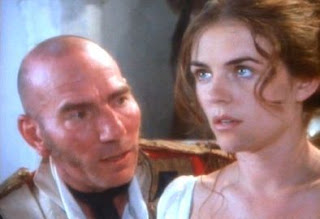 After the excellent action of Sharpe’s Company, there’s not a lot of big battles in Enemy. Small skirmishes with deserters make it tough to tell who’s fighting who. Sharpe’s Enemy, however, showcases another kind of action utilized in the series. He’s quite notorious in the books, but up until now, onscreen Sharpe has been a one woman man. It’s food for thought to see him with another woman at this point in the story. Infidelity is a funny thing, but it’s not meant to be taken so seriously here. Bean fans will probably find Sharpe sexy, and the guys will love Hurley and Serna. Something for everyone. 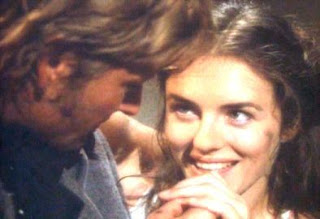 Yet again the DVD transfer seems a bit off, and as involved as the story is in Sharpe’s Enemy, the film ends a tad abruptly. Unless you read the books, you don’t find out what happens to Lady Farthingdale, and Sharpe’s daughter is never mentioned again. These quibbles aren’t rectified, per se, but at least there’s more fun to be had in Sharpe’s Honour.

Sharpe’s Enemy may be a bit too saucy for younger folks, but the depth and the questions raised may bring one to read the books. There’s enough action, beefcake, cheesecake, and vengeance for any audience to enjoy Sharpe’s Enemy. 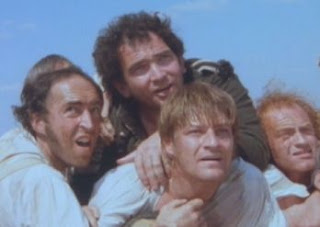 Please see the comments below for our review of the Sharpe's Enemy novel.


Posted by Kristin Battestella at 9:40 PM

And at last we come to my first so-so review of a Sharpe novel. Bernard Cornwell’s Sharpe’s Enemy has several strengths over the film adaptation of the same name, but the television show successfully adds what the book lacks.
I liked Enemy, I was on the edge of my seat for many a chapter, but I was disappointed in the ending. Teresa Moreno’s character deserves more in her written exit from the series. Perhaps Cornwell meant to dismiss her quickly; the way Sharpe placed his wife and daughter second to everything-the war, the Marquesa, Josefina.
The show backed itself into a jam by making the Josefina in Sharpe’s Eagle not the Lady Farthingdale of Sharpe’s Enemy. While Elizabeth Hurley is perfectly juicy in the film, in the novels Josefina is of course both women. The book’s strength comes in Sharpe’s renewed acquaintance with the high class prostitute. He’s married now with a distant wife, will this change his philandering ways? I also enjoyed the brief truce with the French as they work with Sharpe to rescue Hakeswill’s hostages. Ironic for a book called Enemy- Sharpe is dining and drinking with his supposed enemies. The debates over dinner are respectful, complex, and though provoking.

Although the TV adaptation convolutes the timeline and action-the novel would be much too complex to film otherwise, with multiple castle battles instead of one hostage takedown-the film better presents the vile Obadiah Hakeswill. Until the rushed ending, the vile deserter spends most of the novel behind closed doors. Pete Postlethwaite performance onscreen brings more depth and villainy to a character that Cornwell is almost unsure what to do with after such evil Sergeantry in Sharpe’s Company. The dismissal of Hakeswill makes room for the even more wretched Pierre Ducos, who after this introduction, has been a delight to read in the next novel, Sharpe’s Honor.
I like Sharpe’s point of view the best, followed closely by Harper, but it’s a delight to read Cornwell’s villains. Ducos is completely anal in his genius. Unfortunately I am also understanding the notion of head hopping at last. Cornwell too often jumps between perspectives and locations without proper breaks-sometimes from sentence to sentence. It is annoying, and it’s a dangerous move for Cornwell to make. Sure styles may have been different in 1984 when Enemy was written-you can notice Cornwell’s writing changes throughout the series-but if I didn’t care about these characters and their situation, I wouldn’t continue reading.
Sharpe’s Enemy is a must read in the written Sharpe canon, but it isn’t as deep or as tight as previous novels. Enemy seems to be the first of the novels where excessive action is creeping in and infringing on character development. The novel is not perfect, but after telling myself I’ve no time to continue this Sharpe reading binge, here I am already knee deep in Sharpe’s Honor.