Guilty was the first Gibb-related record I actually bought. My mom refused to pay $1.99 for the lp and asked, “Who is that guy on the cover with her, anyway?” I explained it was Barry Gibb producing this one for Barbra and mom answered, “Oh, now I know why you want it.” Oddly enough, I found the cassette at a thrift store, too! 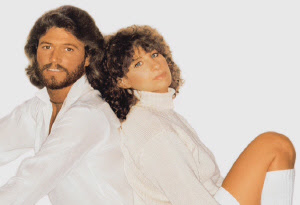 Barry won all kinds of cudos and Grammys for this album, even though audiences in 1980 swore The Bee Gees were passe and disco was by gone. The lead off duet Guilty was written by Barry, Robin, and Maurice, the only track here penned by all three of the boys. Should I even try and count all the hooks, lines, and sinkers in this one? The song fits Barbra perfectly, and yet Barry is in tune also. Who hasn’t tried to sing along with this one? If it’s possible to get more excellent with this song, listen to the brothers’ live snippets of Guilty from One Night Only or Live By Request.

This album isn’t quite like anything else Barbra Streisand has done, but Woman In Love comes close to her prior work. It suits her moody dark style yet has a Gibb touch too it. I have some of the demos for this album, but I don’t listen to them often. Barry sounds just a bit too shrill on the demos. Barbra’s version of Love however has that grand epic feel to it.
Run Wild and Promises are the first two songs presented that were written by Barry and Robin. I’d like to say I can hear something different or a touch of Robin somewhere, but I honestly can’t. Run Wild does have some unique lyrics and just sounds very beautiful. Indeed the boys crafted the songs around Barbra’s voice. She really belts on this one.

Promises is to me the one noticable ‘depature’ track. Okay maybe this one does have a bit of a Robin feel. It seems off beat compared to everything else, and it almost sounds as if Barbra is in a bit of a lower voice. It works superbly when she shoots back up to herself. Just the word Promises and the way she says it will get stuck in your head.

Last on Side A is The Love Inside, which might be my favorite track. It’s the only song written by just Barry and his lyrics are on form. Barbra’s delivery, however, takes this to the next level. Sometimes this album she can be tough to understand, but on The Love Inside, what needs to be understood is so, and what you can’t quite make out, mood, music, and imagination take care off. These few minutes tell us its okay to step back from our busy lives, relax, and yes, stop and think about love! ;0)

What Kind of Fool is the second duet on the album and was penned by Barry with Albhy Galuten, as are the last two tracks. Fool is not as commercial as Guilty, and isn’t even as much of a duet. It does, however, sound the most like a Bee Gees tune. It’s very dark and balladeering. It’s unrepetitive and the interlude kicks it up a notch.

The third Barry and Robin penned tune Life Story is next. It has a lot of booming music and crescendos from Barbra and I can really picture her on a rooftop belting this one to somebody who’s done her wrong. Is that just me?
Never Give Up is what I consider the fast track on the album. Barbra almost rapping is definately what no one expected on this tune, but the chorus is very Broadway styled. Barry’s next project should be a show based on this album. Parts of this song you can’t help but sing along too.

Make It Like A Memory ends the album in big Broadway production fashion. It starts off slow, then turns it up. Although not saying the name of a song is annoying when you don’t know the title, Barbra’s delivery of the long awaited title line in this one is worth it. My one nitpick with the song is the ending. It just drags on and on and fades into the distance. Maybe there is some sort of parallel to be drawn about remembering or the memory fading, I don’t know. I would rather have the song end on some of the big booms and cymbals it’s got in there, but did I win a Grammy for this stuff? No.

Guilty is the perfect album to have in case, just maybe, you want to hear a woman’s voice and still have that awesome Gibb quality in lyrics, sound, and production. Hey, hey, I said maybe.

And A supplementary review on the 25th Anniversary of Guilty!

At the behest of new material, allow me to divulge on the new 25th Anniversary Dual Disc edition of Guilty! Actually I didn't have the original on CD, so getting digital quality plus bonus content was well a plus and a bonus! The new interview between Barry and Babs was nice. A classy sit down with the stars talking about working together then and now and the craft of music in general.

I had seen snippets of the live Barry and Barbra Guilty show, but here it is presented in its entirety. Barbra still seems a bit over the top with her shaking and shimmying, but the dialogue back and forth is a treat.

I didn't even know a live duet of What Kind of Fool existed, but the set is shown in its entirety. Barry and Barbra joke that this is the first time they have performed live before an audience, and the lack of rehearsals shows slightly. A few spots they are a bit off, but hey it still sounds dang good! I've had this stuck in my head now for a week!

The dual disc format is quite user friendly and the interactive menus leave little to be desired. When you play the song selections different pictures rotate through, and the photo gallery is much of the same from that all white, hugs and cuddles photo shoot with the exception of a few unfamiliar snapshots. The one slightly irksome trend on the disc is that all the menus and the photo gallery play Guilty. I would have liked to hear one of the other classics on the album or a snip of each, but I digress. The digital remastering is indeed superior. Who knew white would be popular again, too?

Posted by Kristin Battestella at 8:02 PM